My festive morning continued at the office today without skipping a beat. First on the agenda? Pina coladas!!! You heard read right — Myrna came through at 9am with a giant homemade batch. “But it’s alcohol-free,” she explained apologetically. Fine with me! I had about 1/2 cup, and it tasted just like a tropical island, mmm.

Then, I noticed Belkis’ son Emanuel sitting in the conference room. She explained that his school was indeed closed for St. Patrick’s day (have you ever heard such a thing) and that he had baked us a cake to celebrate!! Here’s the masterpiece: a yellow cake with vanilla frosting and a cherry smiley face 😀

Belkis started talking about how they should have frosted it green, and Inginia piped up that we still had green food coloring AND vanilla frosting left from play-dough and cake yesterday. I ran down to fetch the supplies and set Emanuel up with his new project. I also helped myself to two or five spoonfuls of frosting.

When I got hungry for real later in the morning, I had a cup of cantaloupe, also left from yesterday’s group. 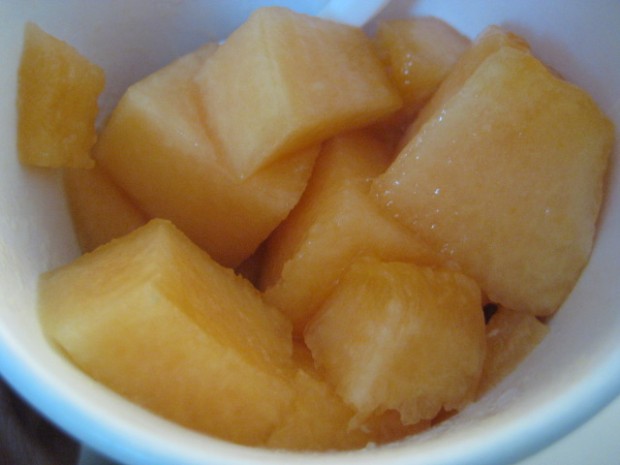 Katty and I had to leave around noon to head up to the Bronx for a lecture on bilingual language development, so I ate my cup of roasted veggies and drank another half cup of pina colada to tide me over.

I also packed up a hefty piece of cake for the road. You didn’t think I’d pass that up, did you?

When we got to the institute, there was a sign that no food was allowed in the auditorium for the lecture! I wasn’t about to wait two whole hours until 3pm for the rest of my lunch, so I quickly inhaled my cup of mac & cheese (from group yesterday), fried rice (from Vianni’s lunch leftovers yesterday), and mixed-grain salad (from my lunch yesterday). 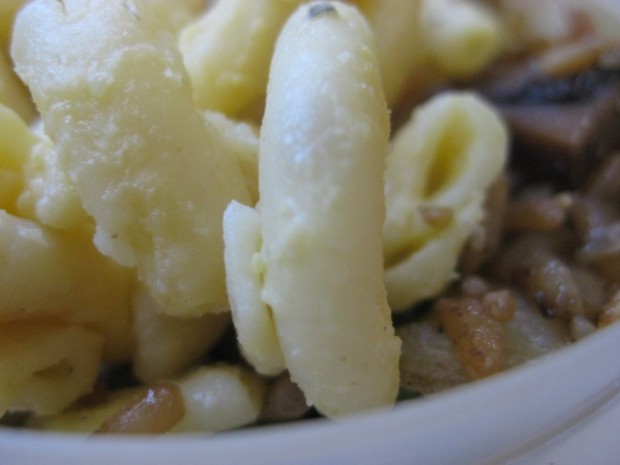 On the subway platform after the presentation, I ate my asparagus guac with a serving of sea salt RiceWorks.

(Side note: I made this guac on Sunday, and look how green it still is without so much as a stir! I think it’s a combo of the lime juice and asparagus.) 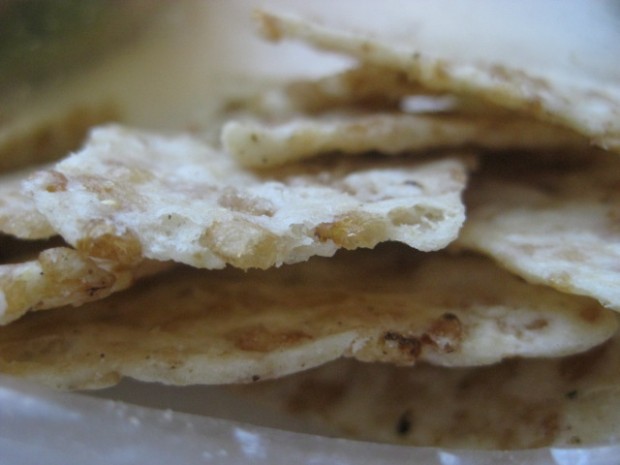 And finally, the moment you’ve all been waiting for, my green frosting-slathered hunk of cake:

Oh, it was sooooooooooo good. 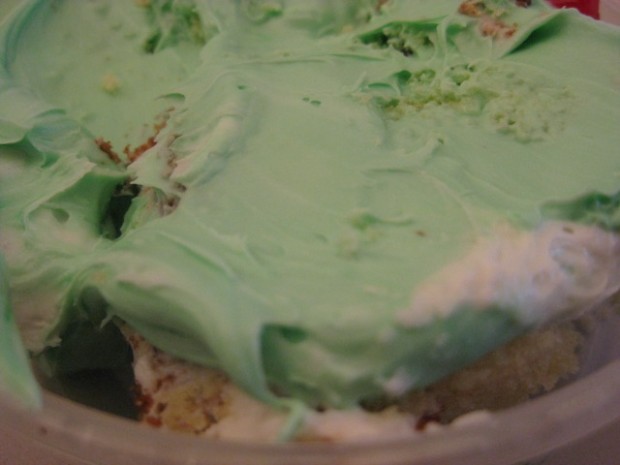 While I was standing on the subway platform tucking into this ridiculously satisfying pile of refined sugar, I spent some time considering Vani’s Forbidden Foods Challenge. The idea is to demystify a food that you usually force yourself to avoid, whether for fear you’ll lose control and overeat it or for its scary nutrition facts or for any other number of reasons. Vani’s suggestion is that you challenge yourself by keeping it in the house and enjoying it in moderation; in essence, this challenge is designed to help you take control over a food that you feel has controlled you in the past.

So once again, I was standing there eating maybe my fourth giant slice of cake in two days … and wracking my brain to think of an appropriate food for the challenge. When I got off the subway in my neighborhood nearly two hours later, I stopped into the local gourmet shop to peruse the aisles (and sample cheese, roasted duck, and a giant hunk of hard sourdough pretzel). And I realized, nothing is forbidden … as long as it is FREE. The food restrictions I impose seem to boil down to money more than anything else. I examined dozens of delicious sounding organic cookie products, locally produced ice creams, full-fat stinky cheeses, dried fruits, fancy nut butters … and I kept thinking: I can make this myself for less money, more health, and more flavor. And if I don’t make it myself, I’m sure I’ll stumble upon it in sample form at some point 😀 No craving was strong enough to make me want to spend the money on anything except for produce!

But, I love the idea of this challenge and really wanted to participate! And that is when my eyes alighted upon the shelf of fancy spreads … full of chutneys, jams, syrups, etc. And I realized, I never buy condiments. They always strike me as such a luxury and never even cross my mind as an option. Granted, I can make most of them myself, but one in particular caught my eye. Meet my forbidden food:

I love lemon curd, and I probably haven’t had it since I was 12 and went to traditional afternoon tea at a fancy Boston hotel with my family. OK, maybe I’ve had it since then, but only in similarly rare situations. To me, lemon curd represents the epitome of luxury, class, and sophistication — none of which I have! It’s not something I would ever buy because, not only is it a ridiculously frivolous product, but it’s also full of butter and sugar. Seems silly when I could just mash a banana on my scone and call it a day.

So, $8.99 later, I am the proud owner of my first jar of lemon curd ever. And I am EXCITED. It was pricey, but the Forbidden Foods Challenge is conveniently taking place when I have done next to no grocery shopping due to free produce flying at me from every direction, so I can make it work. And this $8.99 jar is going to last me a while because I’ll be eating it in moderation. Lemon curd of this quality, made only with real and natural ingredients, is bound to pack a powerful flavor punch. A little will go a long way.

Thank you to Vani for encouraging me to loosen the reins — both financially and nutrionally — in a healthy way!

Have YOU joined the challenge?