Last night was the last night of April. Do you know what that means?? The last night of Brooklyn Restaurant Week Month! Gina, Kate, Kareen, and I obviously had to take advantage. I love restaurant weeks because they let me pretend I can afford to live in this city. We chose Quercy, a French restaurant in Carroll Gardens. The decor was right up my alley, and I fell in love as soon as we walked in.

The mismatched chairs were my favorite part.

Unfortunately, despite the empty room and open, airy space, we were seated in a cramped corner between the bar and the kitchen, almost completely cut off from the giant window in front. Weird. Did not make for good picture lighting, as you’ll see. I could have asked to move, but I didn’t have the energy.

Unlike our previous restaurant week selection that offered the entire menu, Quercy presented a special “limited” menu for our discount dining. Despite the smaller menu, however, the options available did not disappoint.

While we perused the menu, our server brought out sourdough bread (!!!) and butter. I had five teeny tiny pieces (including the end — the best part!) with butter. The five pieces together probably amounted to about one normal restaurant-sized hunk. 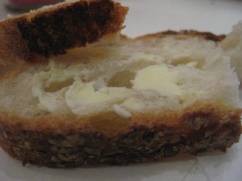 We had very little selection variety in our dinner choices last night, which suited me quite well because it meant that I had fewer pictures to take 🙂

Gina and I both ordered the French feta salad which came with huge chunks of feta (obviously), lettuce, cucumber, and olives. I had my French vinaigrette on the side and used about half.

Kate and Kareen ordered the goat cheese in puff pastry which involved a luscious (because it really was) disk of goat cheese sandwiched between the pastry layers, all atop a bed of greens. 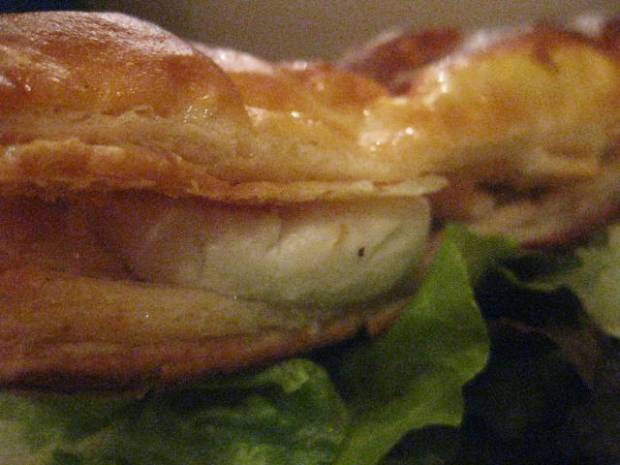 For the main course, Kareen and I ordered the couscous chicken merquez (I had been debating between that and the salmon), a Moroccan dish that involved a mountain (literally) of couscous with a few raisins in the mix, chicken pieces (maybe a full quarter), and lamb sausage:

But that was not it! On the side, came an enormous tureen of vegetable stew with carrots, zucchini, yellow squash, parsnips, chickpeas, and more!

I knew I had to make the cut immediately before I accidentally ate 12 meals in one sitting. Luckily, there were many dishes involved in the serving strategy, so I was able to shift about 2/3 of the couscous and half of the meat onto a separate plate to remove it from my line of eating. Here’s the portion I ate, all mixed together. 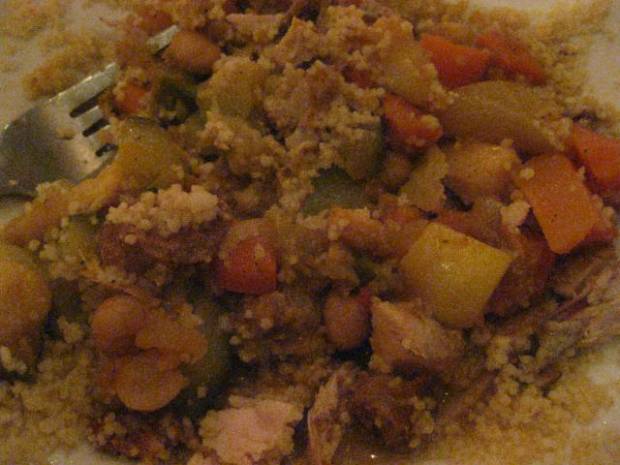 Although couscous chicken merguez will not be entering a beauty pageant any time soon, the flavors were delicious and spicy and unique. I was a fan (and still am, considering how I’ll be eating it for the next week!).

Kate and Gina both ordered the salmon with roasted bell pepper sauce. The presentation of this dish was much more visually appealing with all the colors.

I had a bite of Gina’s salmon. Tasty as it was, it wasn’t anything I hadn’t experienced before. I made the right choice!

I had tons of leftovers, obviously, but so did Kareen, who generously offered to send hers home with me, too. And Gina had a three-bite-piece of salmon left that she couldn’t possibly fit into her stomach, so we added that to my stash as well. Thanks, ladies! Kate joined the clean plate club last night. I’m very proud 🙂

The server probably thought I was crazy (rightfully so), taking home everyone else’s leftovers, but I explained that I was a penniless grad student. The highlight of the night was when I peeked into my massive to-go bag on the way out and found half a loaf of sourdough bread in there, too! I thanked the server, and she told me that it would have gone to waste anyway and she appreciated that I wanted to use everything. That alone is enough to make me want to go back!

At that (stuffed) point, we remembered (or were reminded by the server) that we had yet to eat the dessert that came with our meal! Kate, Kareen, and I all went for the apple tart tatin, another beauty pageant reject:

It was ok, and I ate the whole thing of course, but I have to say that I have tasted better. In fact, I’ve baked better before! My French pastry skills, which are nil, should not exceed those of a French restaurant. 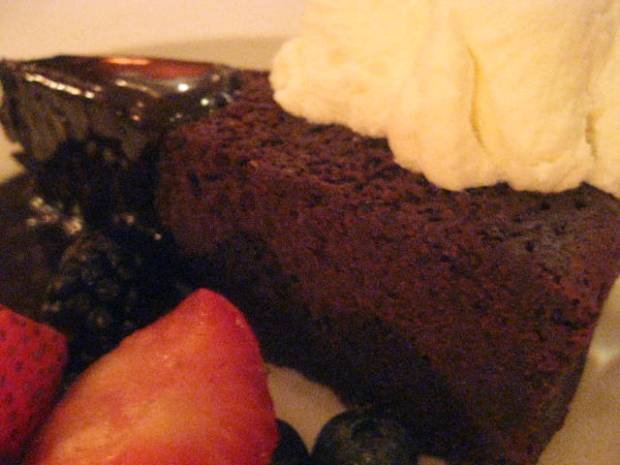 That chocolate sauce was like fudge, it was sooooo thick. 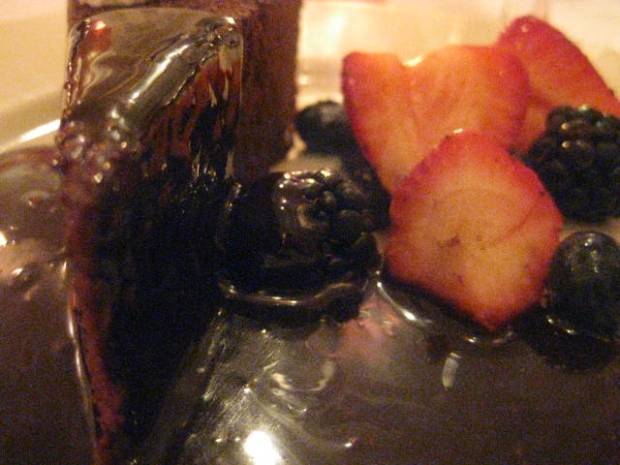 I don’t know how Gina managed to eat this whole thing (well, maybe I do), but manage she did! I did my fork Olympics on the plate at the end to make sure that every grain of perfection served its purpose.

Overall, the restaurant was a mixed bag, but more good than blah — Quercy came through where it counted. I would eat there again but only with my wealthy benefactor because I would want to choose something from the real menu!

Where is the first place you would go with your wealthy benefactor?