Wednesday night after work, I finally had the chance to attend a meeting of the Beam Green Social Club at Tavern on the Green in Central Park. I made my way down from East Harlem and walked across town through the park. I knew I was nearing my destination when the lanterns made their appearance: 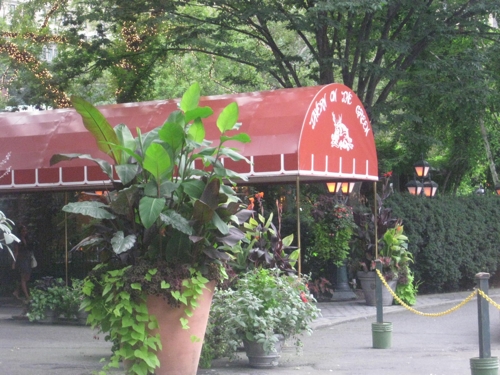 I looooooooove Tavern on the Green, but it’s normally WAY out of my price range. I’ve only been there once before — for a semiformal my junior year at NYU — and I remember that night as being one of the best food nights of my life: 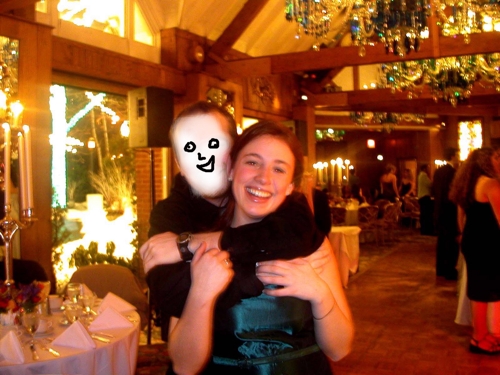 (Though I also distinctly remember having to sleep with a bowl because I was sooooooo full after plates and plates of pesto chicken bowtie pasta, mousse pies, fruit tarts, chocolate layer cakes, and so on. Siiiiiiiigh, youth …)

Anyway, Wednesday night was on the other end of the food-perfection spectrum … as in the food was still perfect but just more selectively chosen (aka all vegan and raw) to be in line with the Beam Green philosophy. (Side note: In case you haven’t heard of Beam Green yet, it’s an organization created to support the “Green Baby Movement” and to help individuals make changes toward a healthier and “greener” lifestyle.)

Diana, a full-fledged member, invited Vani, Olga, and me to come as her guests (yayyyy Diana!). We ran into many other bloggers there, including Missy and Dori:

Obviously, with all of the focus on green, green juice was bound to make an appearance, courtesy of Liquiteria! I started with a glass of All Greens with kale, spinach, romaine, parsley, celery, and cucumber:

This flavor was cool and refreshing and invigorating, and I downed it in two seconds because I was parched. Next, I moved onto Mr. Green with carrot, apple, beets, ginger, and “Super Green Food & Liver Kidney Lymph Detox,” which was perhaps even better:

Mmmmmmmmm. Let’s add a juicer to my list of necessary kitchen appliances!

We spent time milling around in the lap of luxury …

… though at times like this, I can’t help wondering how I manage to have access to events like this for free while people who can’t even afford a bag of apples do not. Anyway, I’ll skip my own philosophical debate because this is a food blog and move right onto the main event: 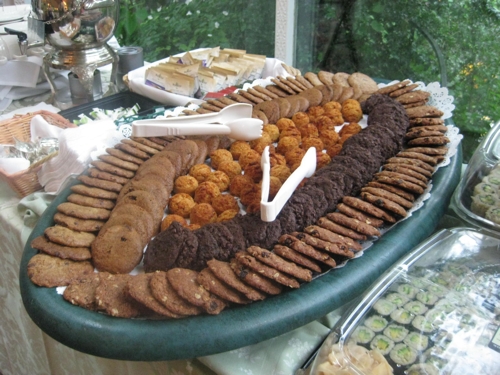 Here’s my plate with a mountain of veggies, sushi rolls (and lots of ginger!), and a slice of raw zucchini lasagna from Three Wishes: 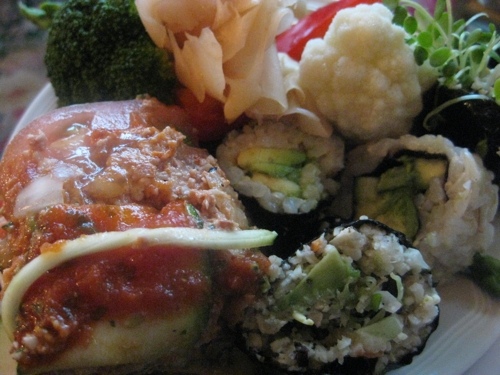 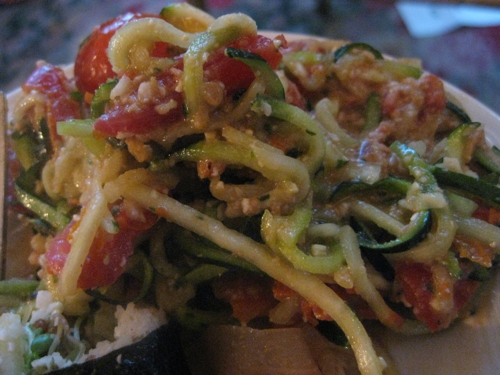 For dessert, I filled one plate with fruit:

Vani reminded me (and good thing she did!) that there was more dessert coming later, so I just had a bite of each cookie (plus a whole macaroon, obviously) along side a bottomless teacup of earl grey: 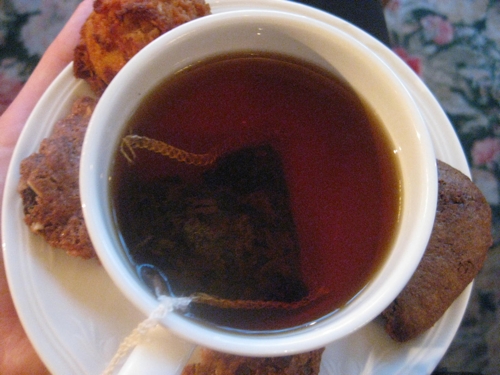 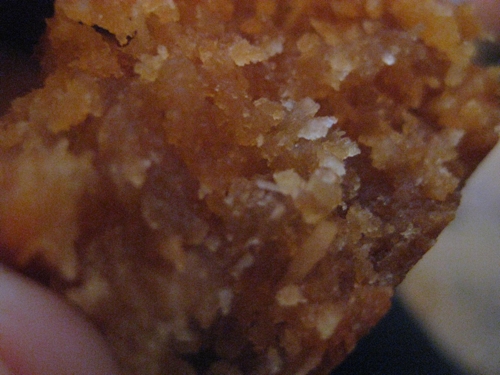 Then, the actual main event of the evening began: the speakers! We listened to Beam Green’s founder (Mary Boehmer), the founder of Stogo dairy-free ice cream, Gil Jacobs, and a kabbalah expert: 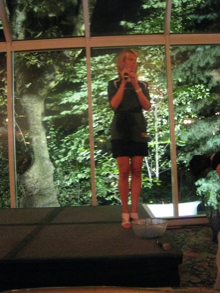 At the break, we had the chance to sample some of Stogo’s coconut milk-based ice cream in chocolate and vanilla: 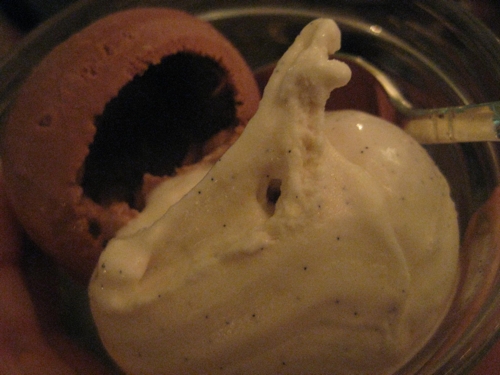 With tummies satisfied (and minds in an overloaded state of health “information” worthy of further research), we made our wait out through the hall of mirrors:

At which point, my plans separated from those of the girls and included a lovely stroll back through Central Park: 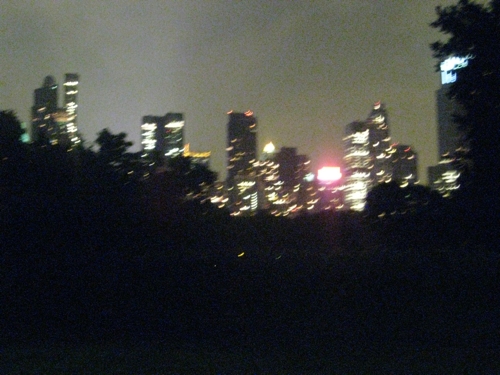 And an impromptu midnight stop at a dinner in the Village for, errrrr, an ice cream sundae? 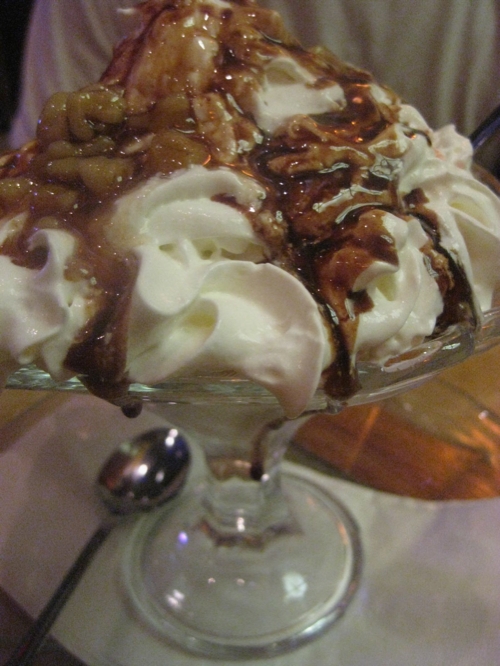 In all fairness, the goal was Stogo, but the entrance to Stogo was hidden somewhere, and it was hot, and we were tired, and Moonstruck was just so available. 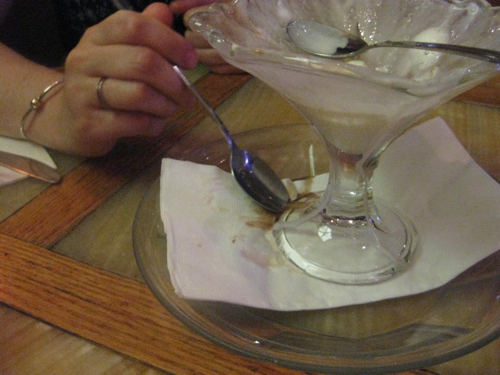 I’m off to Buffalo this weekend with Erin Gunn and Mike to visit Erin’s sister Siobhan and work on some wedding planning, so I’ll probably be MIA until early next week … but I’ll be back with updates!

Clearly, I have no problem enjoying a full-blown vegan and raw feast … and following it right up with something decidedly NOT vegan and NOT raw. What foods do you eat that are at odds with each other?