Last week was full of all sorts of tea excitement! It started when Lillian dropped two bags of Eggnogg’n tea on my desk:

I had heard so much about this tea but never had the chance to try it. I added milk and honey and curled up under my desk in solitary eggnog confinement, mmmm.

Next, Deborah brought in fresh ginger tea homemade by her mama. 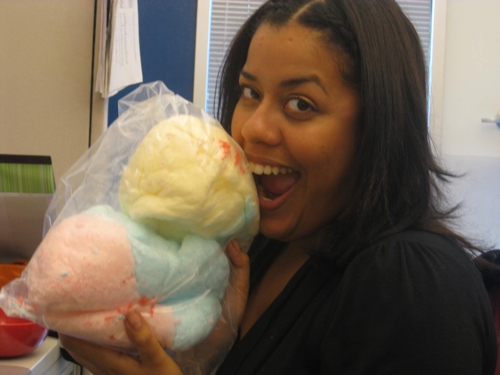 Wait, that’s not ginger tea! How did that get in there?!!! We definitely did not also eat a whole bag of cotton candy left from the Knicks game her friend attended … 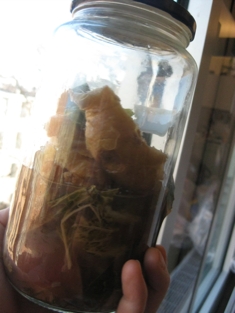 Can you see those giant chunks of real ginger and apples?

It was some of the best tea I have ever tasted! 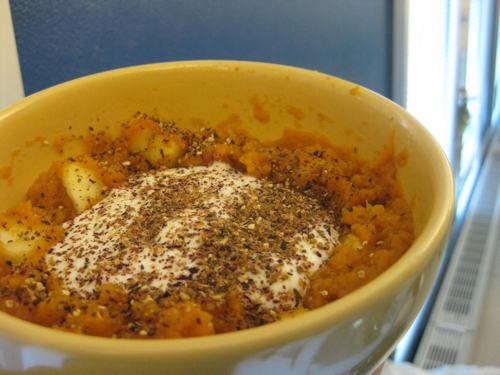 In an effort to avoid the cakes upon cakes upon cakes at my office, I’ve been going grocery shopping next door so that I can keep delicious and healthy snack ingredients — like apple, pumpkin, and yogurt — on hand at all times. This bowl of winter comfort involves a cup of pumpkin microwaved for two minutes with a chopped apple and topped with plain yogurt and …

… the contents of an apple cinnamon herbal tea bag!!! Delicious AND beautiful at the same time 😀 I love how the tea turns the yogurt pink.

Next up: Mr. Midwest himself (aka Erik) brought back some fancy teas from his trip home at Christmas: 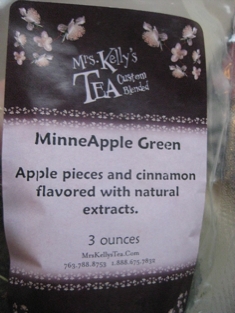 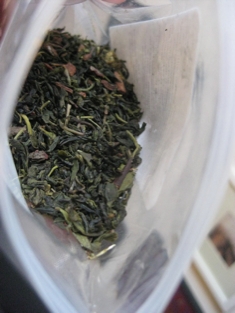 This tea is delicious — it has actual chunks of cinnamon stick and apple in it. I’d show you a picture of the giant chunks of apple … but I accidentally ate them right out of the mix before the camera got there, whoops

Adventures in wholesome beverage-land continued on Saturday when we headed down to Bay Ridge for a Merry-Christmas-to-ourselves massage followed by brunch at HOM: 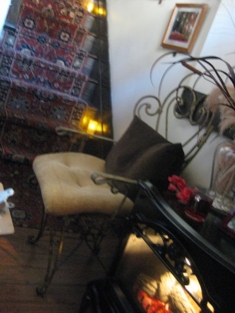 (Erik is not actually supposed to be the star of that picture.If you look at the board up above his head, you’ll see the many teas listed on the menu. To the right of his tongue, you’ll also see giant canisters of The Republic of Tea teas.)

We ordered a pot of blackberry sage tea: 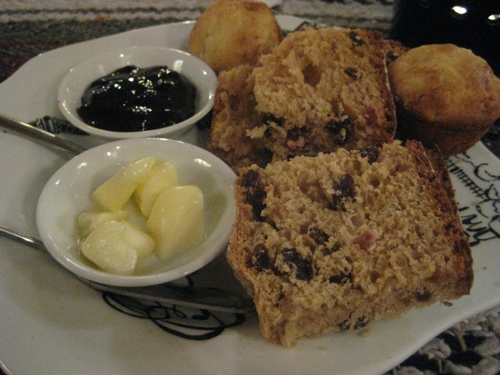 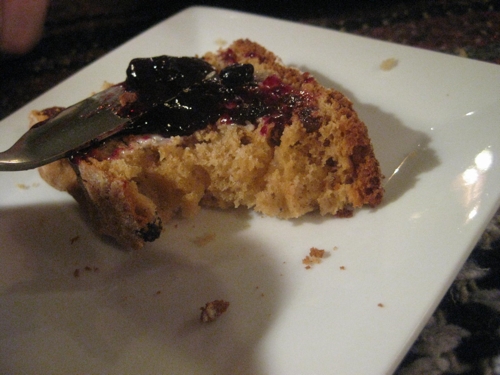 We devoured the plate and I probably would have been full for the rest of the day on just that (especially after eating lots of complimentary trail mix at the spa :-p)!

But there was more! We ordered two brunches to share, and the chef/waiter/jackofalltrades brought the meal to us already split!

And a turkey reuben (turkey, Swiss, sauerkraut, and mustard) on marble toast with a cranberry goat cheese salad on the side:

I was pretty stuffed before I ate this, but I was significantly more stuffed after!

Geez, just writing this post made me feel tons of relaxed. Clearly, tea is the solution to everything. And, apparently, I consume copious amounts of it!

What does tea do for you?