If I haven’t written about food much lately, it’s because we are too busy cooking it and eating it. Life sometimes feels like one big whirlwind of food preparation, and even I get sick of thinking about it! We have been carving away at our stores of goodies from last year’s farm season and have tragically finished our freezer meat, canned tomatoes, and sweet potatoes. We are down to just six lonely butternut squashes.

With three months of solid food under her belt, Beatrice is now eating everything we are, with the exception of honey. I use “eating” loosely, though, because the honeymoon period of her inhaling everything we put in front of her has ended. She pounds her tray impatiently for food and then, when it arrives, she fills her fists with organic broccoli and local venison steak and wild rice and sends it all into the air in a glorious arc. She will eat it tomorrow when she finds it in the corner of the room we forgot to sweep. And by “forgot,” I mean that we never took the broom out of the closet. Or had intentions of doing so.

But why is my tray empty?

Beatrice’s stubborn determination to fling her gourmet meals as far as possible will not deter me, however. We’ll just keep offering her whatever we eat until she figures out that seafood caught that day tastes so much better than a dried begonia leaf that has fallen from the plant in the windowsill. Baby-led weaning at its finest.

In the name of expanding Bea’s palate beyond dead plant leaves, Erik and I have been making a big effort to add more herbs and spices to the food we offer her and, since we’re all eating the same food at this point, to the food we prepare for ourselves. We tend to get into a winter rut with meals because we just want to get in and out of the grocery store, and in and out of the kitchen, as fast as possible.

recently in search of inspiration and came upon a beautiful tutorial about flavor combinations that work well for babies. The suggestions sounded pretty delicious to this adult, too! I’ve gotten a couple of questions about how we flavor Bea’s food, so I put together this pinnable (hint hint!) chart with some ideas from the book and some ideas from our own kitchen. Feel free to pass it along! 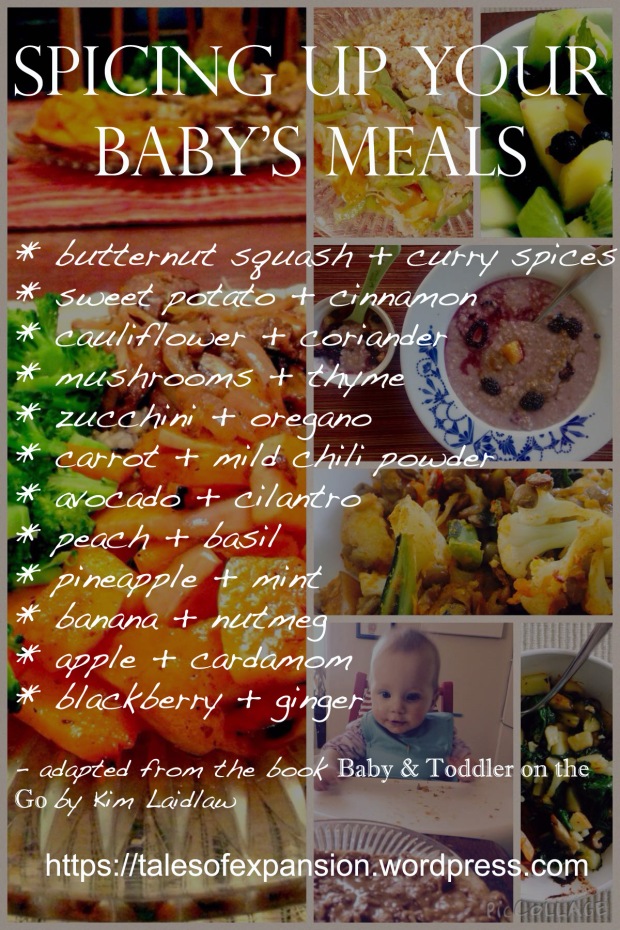 If you have other flavor combos to add, I’d love to hear. Please leave them in a comment below! 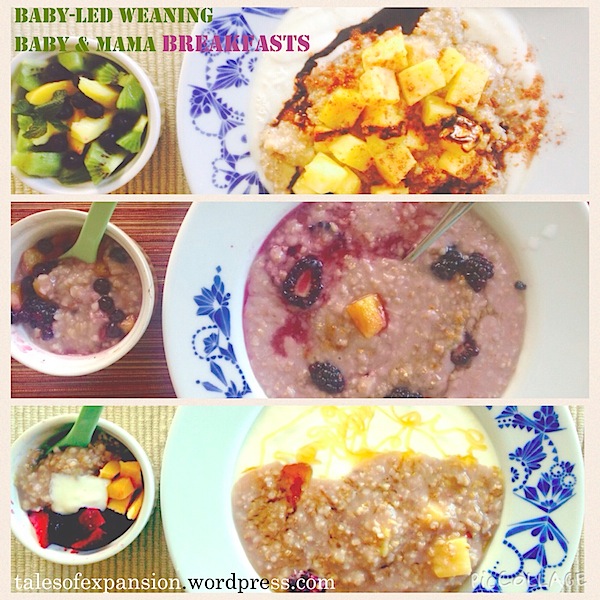 We’re still eating oatmeal most mornings, and Bea actually loves it and eats it all, probably because it is sweet. I cook the steel-cut oats in water with mashed banana and whatever other fruits we have around, and I usually add cinnamon and/or fresh ginger at the end. I put some oatmeal in a little dish for her so that I can add honey or molasses to my bowl with abandon. Our typical winter fruit selection does not extend far beyond apples, bananas, and the occasional orange, but I quickly learned that Bea needed more variety to, err, keep things moving. I bought a couple bags of organic frozen fruits (mango, pineapple, berries) from the local natural foods store, and that solved the problem. This solution was not cheap, but one bag of fruit lasts a surprisingly long time when I’m only going through two mango chunks per day!

Depending on my mood or the menu options or the ratio of banana-to-oatmeal, I alternate between giving Bea just fruit, just oatmeal and fruit, or a yogurt-fruit-oatmeal combination. I bought some little packages of organic fresh mint and basil and keep them in the freezer so that I can quickly add them to her breakfast medley for more pizzazz.

Sometimes, the herbs make it into her mouth via piggyback on a pineapple; other times, she disdainfully plucks them out of the fruit pile and drops them over the side of her tray onto the floor.

Also, Bea loves berries. The darker and more stain-prone, the better. She had her first encounter with strawberries this week, and I would classify it as a success.

I have gotten a bit gun-shy about putting a loaded spoon of oatmeal on her tray. Her new trick is to pick the spoon up and wave it around before putting it in her mouth, which does not pair well with my lack of cleaning ethic. More often than not, I just dump the contents of the spoon onto her tray and let her go to town with her hands. 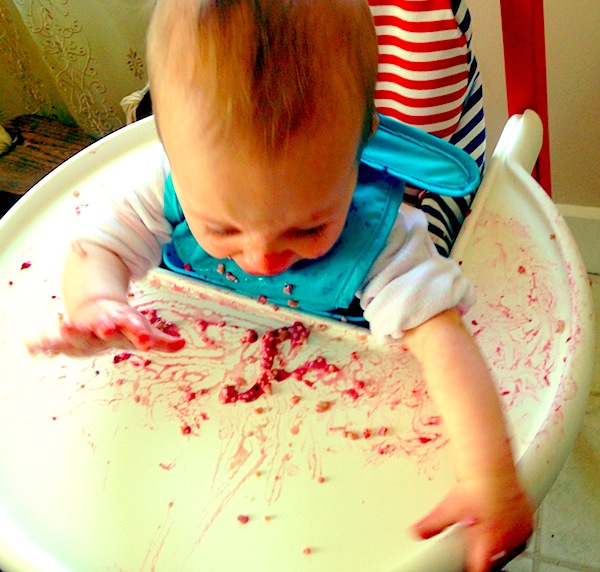 Erik and I try to cook the week’s lunches on Sunday, but no matter how much we cook, we can never seem to make the food last more than two days. Sigh. I could try to blame Bea, but she probably eats two tablespoons at most before the food starts to fly and I quickly rescue what’s left on her tray for myself!

If lunch involves sweet potato, butternut squash, or carrot, however, Bea will completely attack it (or at least attack the orange pieces) and leave no evidence behind.

I loosely followed this recipe a few weeks ago for Peppered Lentils with Kale & Butternut Squash. I added cauliflower and a few hefty shakes of coriander, and we all loved it. 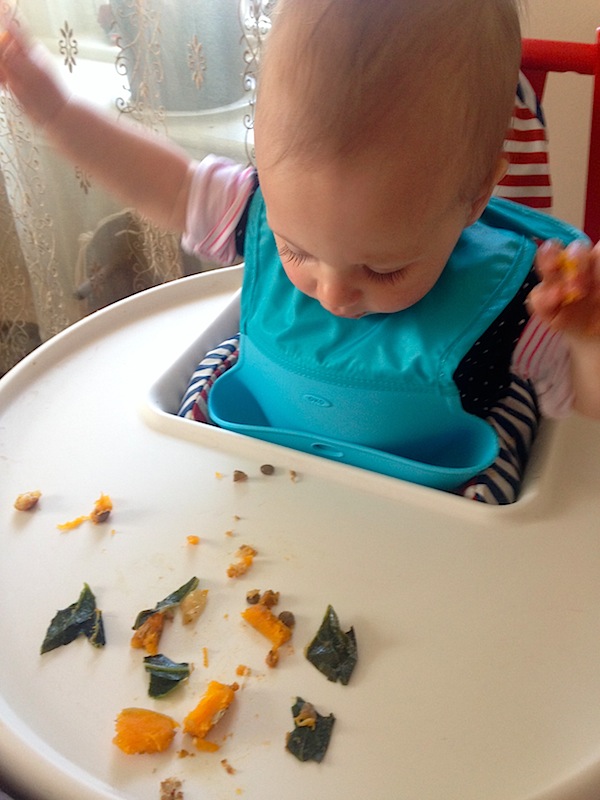 Erin Gunn shared this simple recipe for slow-cooker pulled pork with me, and I used it for the big blocks of farm pork butt and pork shoulder we’d had sitting in the freezer for months. I’m really not a huge meat fan, especially when I am tasked with turning a massive piece of the raw material into something edible, but this was delicious served with butternut squash curry soup from this recipe.

Some recipe adjustments: I added sliced carrot rounds to the crockpot a few hours before the meat was done (highly recommend this!), omitted the sugar and lemon juice and buns from the recipe, and found that one bottle of Stubb’s BBQ sauce was sufficient for the 5+ pounds of pork. I omitted the honey from the butternut squash soup. Our squashes are sweeter than ice cream as is!

This may have been the meal that ruined Bea for all other foods. I rinsed her pulled pork before heating it to try to remove as much of the sugary barbecue sauce as possible, but this was still a very sweet meal, and she housed it, sauteed collard greens included.

Other recent meals have included Venison Steak with Caramelized Onions and Mushrooms and Portuguese-Style Pan-Fried Hake (yay for the return of Cape Ann Fresh Catch!). As usual, we followed the recipes loosely based on the ingredients we had available. For example, the hake recipe called for cornmeal, but we did not have cornmeal and used unsweetened dried coconut instead. It was FANTASTIC.

Ehhh, evening food photos are always lackluster, but trust me that it tasted better than it looks!

Finally, we brought Bea on a dinner date last weekend at Short & Main. We loooove this restaurant, but we hadn’t been there since well before Bea was born. As expected, the staff was absolutely lovely in accommodating our miniature person with her own booster seat and even went off in search of a whole carrot (BEST teething remedy as four more teeth are barreling through her gums) for her to chew. The carrot search was unsuccessful, but we were able to distract her with salty oyster licks: 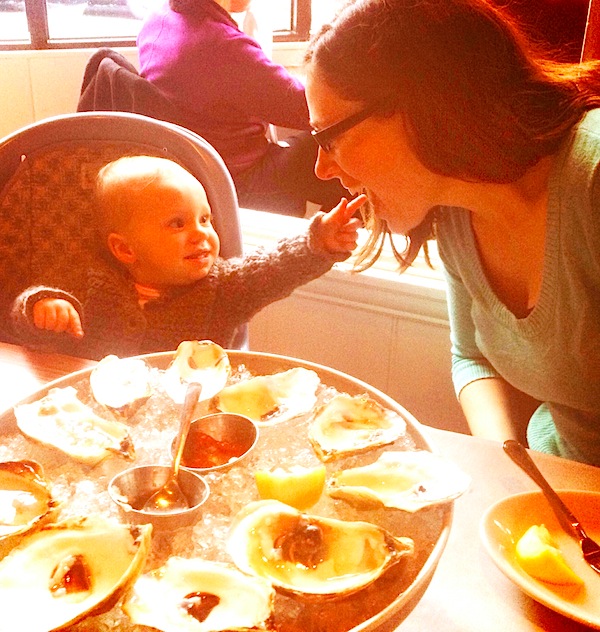 And bites of sausage and mushroom pizza:

I’m not totally on board with giving my 9-month-old oysters and pizza, but if there’s a place where it’s sort of ok, that place is definitely Short & Main. I trust their ingredient sourcing (they sometimes use a farm where Erik used to work!), and their food is flawless.

So there it is: adventurous baby food, adventurous adult food. I’m so glad we all benefit! And thank goodness for carrots. 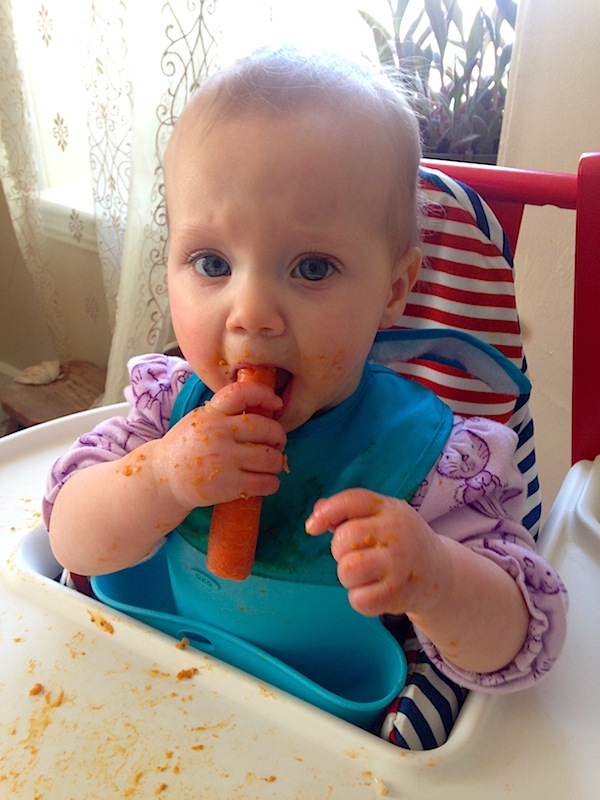 P.S. I’ve added our favorite feeding products to the Baby Butternut amazon store. Some of these items were gifts, and some we purchased ourselves. You can find the store here.