Yesterday, Beatrice woke up from her nap like this:

Have you ever seen anything more pitiful?

We had been considering converting her crib to a toddler bed for a few weeks. Just a month or two ago, Beatrice LOVED getting into her crib. She’d start arching her body toward the crib while we were still singing lullabies and rocking her at bedtime. When I’d bring her into the “big bed” in the middle of the night to nurse, she’d start demanding, “dada, put a baaaaby back in the cribby!” as soon as she was done.  At 21 months, she still does not sleep through the night, but I’ve made peace with the fact that she will keep waking up as long as we are breastfeeding. I was fine with the night wakings because she was (“was” being the operative word) going to bed so easily (and also back to sleep so quickly after nursing) for naps and at night.

I had been thinking about making the switch to toddler bed for a few reasons.

2. Our naptime/bedtime routine typically includes standing by the crib and rocking Beatrice for two verses of a lullaby and lowering her into the crib for the third verse. She probably weighs around 23 pounds at this point, and my back was starting to hurt during this process. I was also having terrifying visions of being stuck in this routine with future 7-year-old 40-pound Beatrice.

3. I discovered an effective strategy (which has now backfired) for helping Beatrice lie down in her crib when she does not want to sleep: back rubs. I can’t describe to you the agony of awkwardly leaning over a crib (while not resting on the railing out of fear I will break it) and rubbing a child’s back when said child will not allow the back-rubbing to end. I think my back needs some professional attention at this point.

Compounding the three reasons above, Beatrice has become increasingly anti-crib over the past few weeks. She used to nod her head up and down vigorously while I talked her through the bedtime routine during her last breastfeeding session of the day. Now, she interrupts her nursing to say, “Not yet, mama. Not yet.” When I try putting her in the crib, she clings to me for dear life, begs me to stay, and screams hysterically when I leave the room. 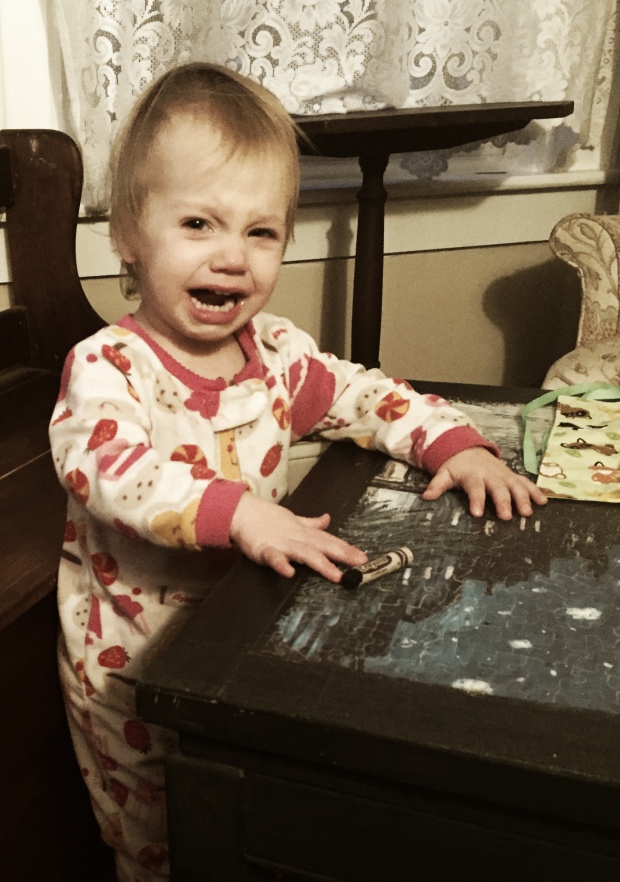 Life is not fair.

During a particularly torturous bedtime last week, I heard Beatrice take a break from screaming. Phew.

Then, I heard a thud. Followed by whimpering.

I immediately knew what had happened and opened the door to her room. Beatrice was walking toward the door, sleep sack and all, with her hand on her head. “Mama, kiss it! Bumped the head.” Determined baby had dived out of her crib head first! Or that’s what I’m assuming, since the sleep sack would not have allowed her to get her leg up over the rail. She did not seem particularly distraught, so I kissed her head and put her back in the crib, where she eventually fell asleep after a few minutes of more tranquil crying.

She hasn’t tried to get out of her crib since, so I thought she must have scared herself sufficiently to stay in there. The bedtime battles continued, however, and I knew we had to change something. Her sad nap wakeup yesterday gave us the final boost of motivation we needed.

Our crib (the IKEA Sniglar) came with a bar for converting it to a toddler bed, so I pulled the bar out from behind the baskets on the top shelf of Bea’s closet where it had been waiting for two years. TWO YEARS?! I remember putting the bar into the closet and thinking that needing it was so impossibly far into the future.

I opened the conversion instructions, which were of course more involved than I had been expecting, necessitating some acrobatics. Because the crib is wedged into a tiny space, I enlisted Erik to scale the wall.

Bebop and I coached him on how to remove the bolts for the mattress base. 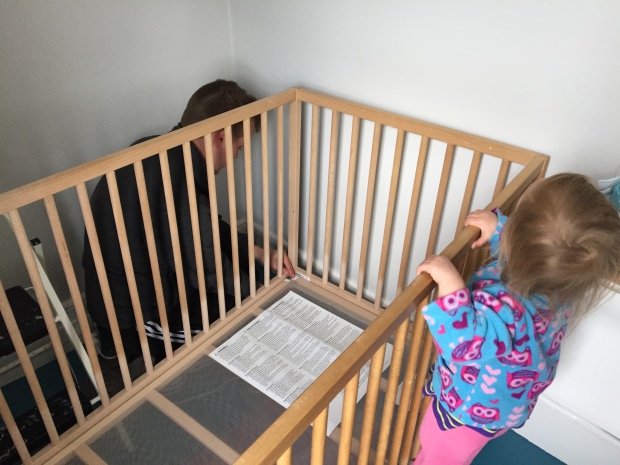 Base out … and Erik trapped. 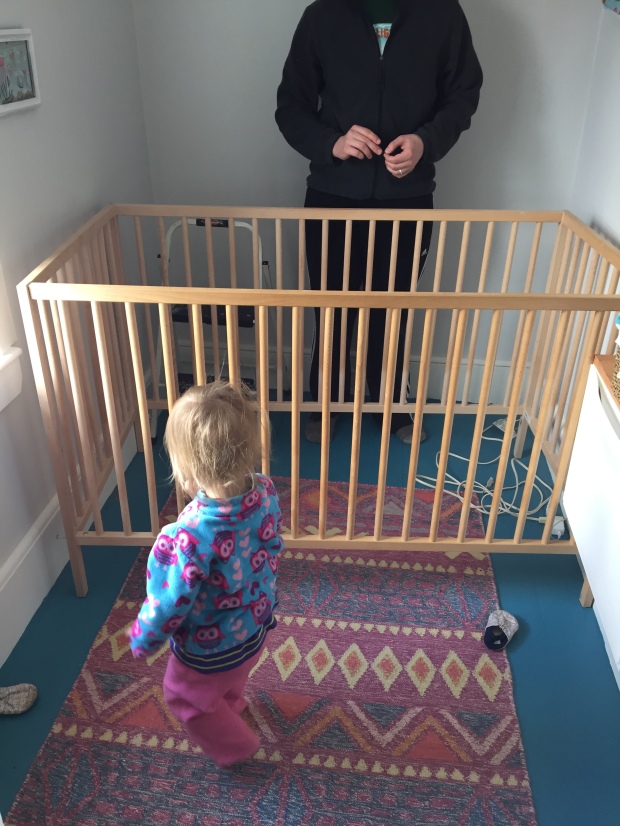 We don’t have pictures of the actual removal because Beatrice was busy taunting Erik with her ability to slither under the crib to his side and back out again. We needed all hands on deck to make sure the loose crib side did not fall on her head! Once I got that panel off, Erik was able to make a clean escape.

Bop wanted to help me take out the placeholder screws …

… and move them up to the vacant holes at the top of the crib.

We got the rail attached at the bottom and hid the removed side on the floor under the bed.

With the mattress base, mattress, and bedding replaced, we gave Beatrice permission to approach the bed and do her worst.

Her worst involved happily jumping on her new big bed, so I can’t complain.

I wanted to get her on video waxing poetic about the transformation, but this was the best I could do. 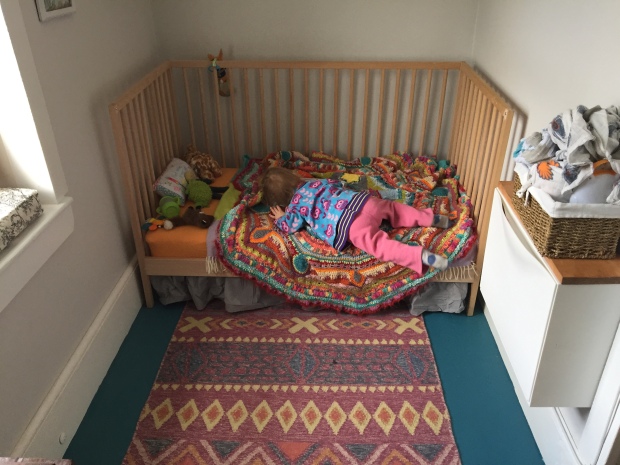 I spent the rest of the afternoon sort of panicked about how bedtime would go. I did not want a bedtime battle, and I especially did not want to have to convince Erik to scale the wall again so we could replace the fourth side. Every time I asked Beatrice if she was excited to sleep in her big bed, she threw a tantrum and shouted, “No sleepy, no sleepy, nooooooooo!” My confidence was fading.

At dinner, I asked her if she would like all her stuffed animal friends to sleep in the big bed with her or if she would like them to sleep in a basket. Until recently, she slept only with “baabaa green sheep,” but we’ve been adding more friends to the mix as part of our pleasegotosleepyoucrazybaby negotiations. She said she wanted her friends in a basket, so I made a cozy basket bed for all except the green sheep, who stayed in the big bed. I also put a body pillow down on the floor at the side of the crib, more for my peace of mind than anything else. 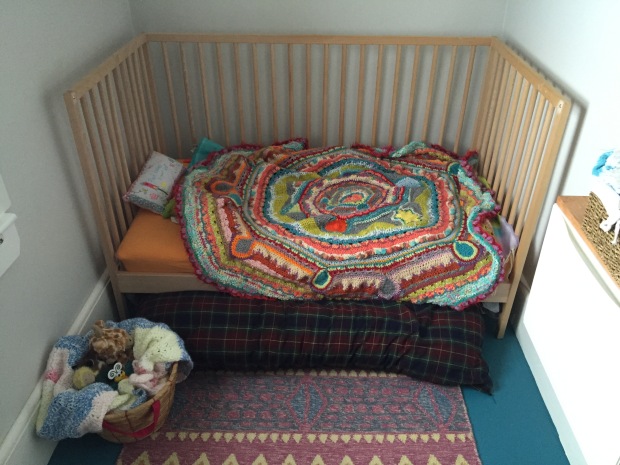 I put her in her pjs and nursed her in the big bed. While she was nursing, I reminded her that she should call for us from the bed (ha! what are the chances?) when she wakes up at night so we can come get her, and she agreed. She chose LMNO Peas

for her bedtime story, so we read that in the big bed, too. I told her I would rub her back while we sang if she would lie down on her belly. She excitedly agreed and snuggled up with her blanket and baabaa while treated to a special mama-dada duet of “This Pretty Planet.” She sang along with every word and then let me stop the back rub to wind the mobile. I did the bedtime kiss and “sleep tight” ritual and walked out of the room. Beatrice did not make a peep!

We’ll see how the rest of the night goes, but I am thrilled we avoided a Sunday night two-hour bedtime meltdown. I’ll have to report back with some official highs and lows once we have survived a few nights. Keeping my fingers crossed …