Overall, our switch to the toddler bed was a great success … until I broke the bed just three days after we started using it. 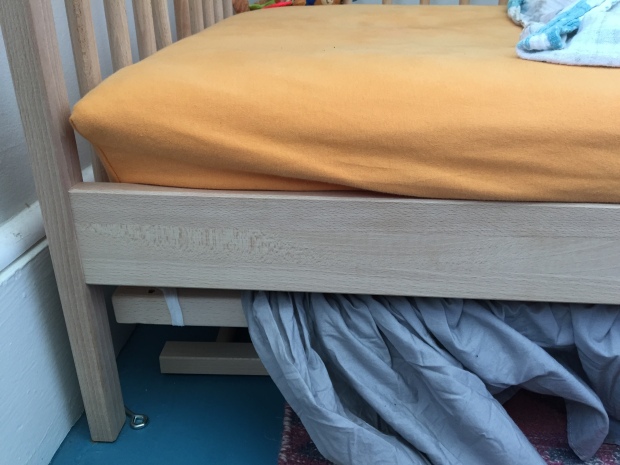 For me, one of the biggest perks of taking that front rail off the crib was that I could sit next to Bea and rub her back before bed or nurse her right in her bed when she woke up at night. 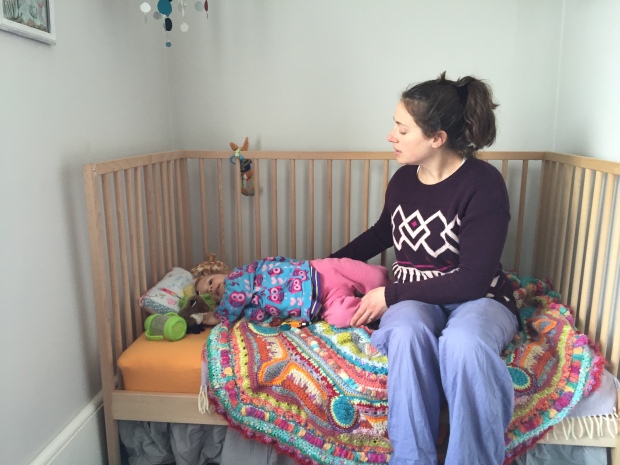 I did have the idea in the back of my mind that the crib probably had a weight limit, and that weight limit probably did not include an extra 135 pounds. However, I figured that all would be ok as long as I sat gingerly on the edge or was careful to distribute my weight evenly over the whole bed.

Bea had a hard time settling down for sleep one night soon after we converted to the bed, so I was sitting on the edge of the front corner with her on my lap, nursing and rocking in the dark, when I heard a little clunk and we dropped a few inches. Whoopsie!

Bea had finally just quieted down a bit, so I whisper-shouted for Erik a few times to try to get his attention. My attempts were futile. I had to bring Bea back out into the brightly lit world and the cacophonous kitchen with the washing machine and dishwasher (aka Erik) running, forever destroying the carefully crafted illusion that we rest when Bea rests. I announced to Erik that I had broken the toddler bed and that he needed to fix it immediately, and then I whisked Bea into the big bed in our bedroom with my fingers crossed that she would have her own room back shortly.

As soon as Bea and I got settled, however, I heard the familiar sound of tools flying followed by a stream of overly happy, peaceful, pleasant expletives. Super conducive to baby sleep. Back into the bright world we went to find Erik hunched over the sink frantically hacking away at a piece of scrap wood with a kitchen knife.

I really wish I had pictures.

I rolled Bea in a giant wool blanket and deposited her on the floor of the living room with instructions to stay put (she listened, miraculously!), and then I rummaged through the tool closet to find our mini-saw, which Erik was sure did not exist. He had the saw in hand 30 seconds later, and I went to check the damage in the nursery.

I guess my extra weight had widened the hole so that, even with the key back in, it was slanting down significantly and barely holding the mattress base up. Awesome.

Erik came back in a few minutes later to save the night with his little wood scrap, and we shoved it underneath the base. It could have stood to be slightly longer, but no matter. The stick was just tall enough to wedge underneath and take on the weight of that corner of the mattress. 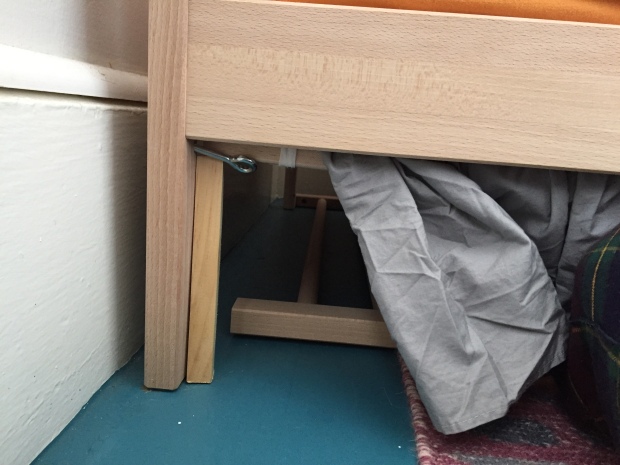 With the crib skirt on, you can’t even tell that anything is amiss.

I retrieved Beatrice from her wool burrito on the living floor, and she actually allowed me to return her to the bed. Phew! We have been (mostly) smooth sailing since, and I have been making sure to stay OFF the mini-bed and kneel on the ugly body pillow instead.

Speaking of the unsightly body pillow, I would really like to remove it from the room. Bea never leaves her bed of her own volition, but she has been rolling out of it almost nightly in her sleep. The pillow does its jobs to cushion her falls. I have been thinking about the IKEA guard rail, but I don’t like that there is no plain wood option to match the crib. I’m still on the fence about whether we should put the effort into DIY-ing a rail from some of our scrap wood or just let the girl keep tumbling. She’s bound to catch on soon, right?