So, after nearly a year of planning, Erik and I quit our jobs at the end of June and moved to Nicaragua for two months to volunteer. We got back a couple days ago and are diligently working on arranging our next move. In the meantime, food descriptions have been demanded, and I am here to deliver :-).

We’ll start with the best: cacao! Cacao starts here, in a tree: 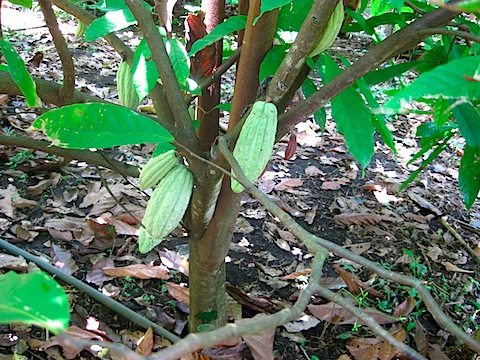 When the fruit is ripe, one of Erik’s adoring English students picks it and carves it appropriately. 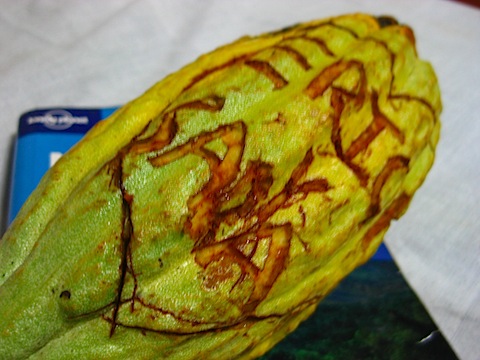 What you cannot tell from the picture is that when the heart is removed, exposing the innards of the fruit, several little beans are lined up inside waiting for collection. The beans get roasted:

Mixed with cinnamon, spices, and other secret ingredients … and bagged and/or frozen for future use: 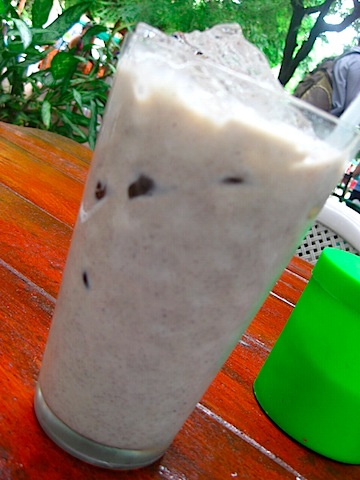 Cacao was one of my favorite beverages in Nicaragua (depending on who prepared it).

Granada was a convenient place for Erik to live, as even the doctors recommended his favorite beverage:

Erik took advantage of the convenient late night schedule, much to my happy surprise (eye roll):

However, we both agree that the real beverage winners were the refrescos naturales: fresh fruit juices everywhere we turned! Pitahaya (hot pink dragon fruit), mango, watermelon, papaya, limonada (limeade), naranja agria (sour orange), and the list goes on and on. 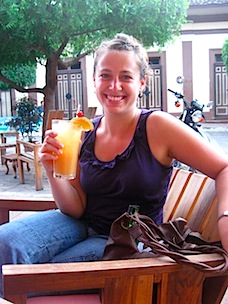 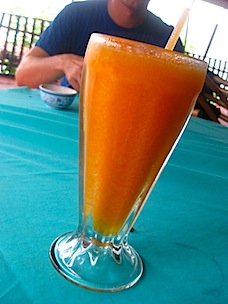 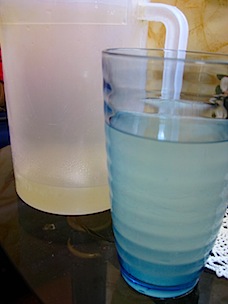 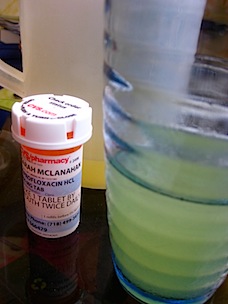 And that freshly picked ginger coconut juice is the best concoction ever discovered: 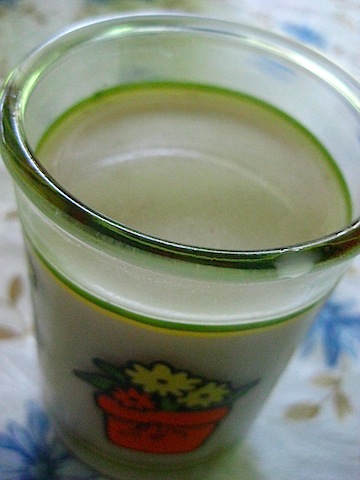 Moving onto the slightly less heart-healthy portion of our journey, Nicaraguans LOVE fried food. Since room and board were included in our program, we had no choice but to drown ourselves in vegetable oil and enjoy it.

Repochetas (fried tortillas with cheese inside):

Tacos dorados (fried tortillas with chicken inside) and gallo pinto (fried rice and beans, a staple of every single meal): 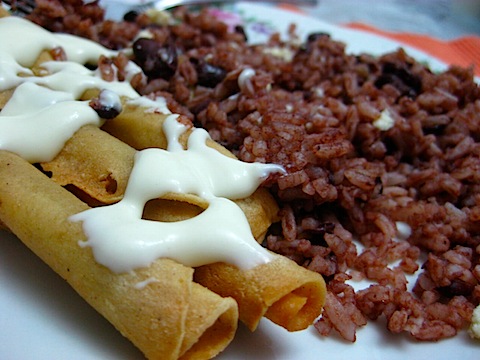 Vigaron (a pile of potatoes, cabbage, and fried pork fat, served on a banana leaf):

Every once in a while, when I really really really thought I might die of a heart attack at any moment (a grand total of two times), I excused myself to go to the one restaurant in town with fresh vegetables in stock: The Garden Cafe. There, I would spoil myself with a Mediterranean salad and a coconut, lime, pineapple smoothie:

Best pancakes ever, homemade by Lucrecia (our Nicaraguan “mom”):

It was probably my favorite traditional Nicaraguan dish, and I’m so sad that I could not manage to get a pretty picture of it. Just trust me that it was incredible. We only ate it on Sundays because the preparation process was so labor intensive, and I looked forward to Sundays every week for this reason:

I also received quite a bit of food education. For example, almonds grow on trees inside of fruits like so:

The fruit is edible (but more frustrating than delicious, I would say). Reaching the nut is a definite challenge: 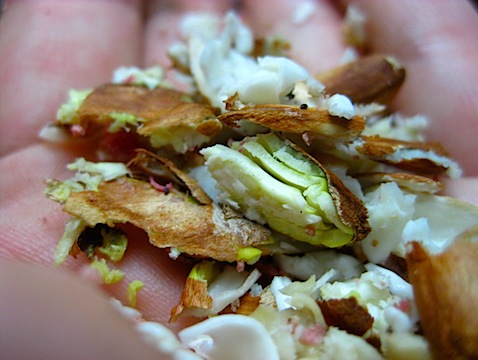 I now understand why almond butter is so efffffing expensive.

We helped some fishermen (through observation): 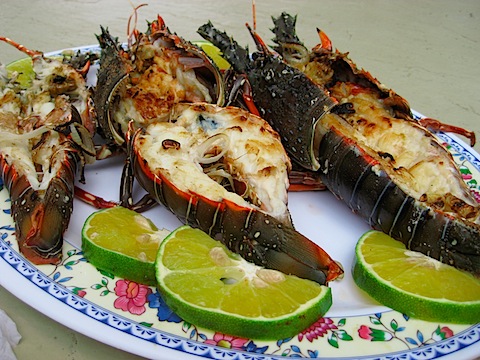 We helped (or delayed, as the case may be) family farmers. Here’s Erik describing how he killed his first chicken (sorry chicken!): 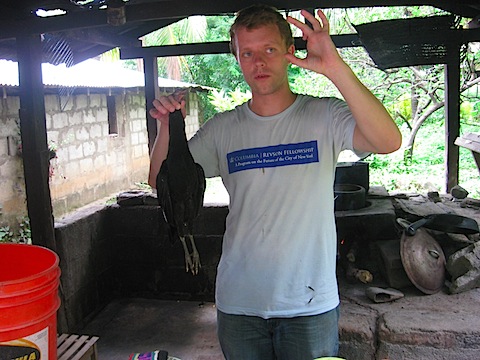 I received a life-changing lesson about rice. The entire trip, I just could not figure out why everyone was only eating white rice, especially if rice grows readily right there. Why would the farmers themselves go through the hassle and expense of having the rice milled when they could just eat it as is?

Every time I asked about brown rice, I got stares like I had 20 heads … followed by lectures that brown rice would destroy my stomach. Near the end of our trip, we went exploring around the farm where Erik worked (and where we lived for the last two weeks) and found a field full of rice:

We decided to carry out our own investigation. Whole rice:

The brown husk/bran/germ (whatever you call it) was completely inedible. It was even inedible cooked, as we once encountered a piece that had accidentally made it into our dinner. Inside, the rice (the only edible part) was pure white, not brown. I was so confused!

To solve the issue once and for all, I went to a natural pharmacy in town (catering to tourists, obviously) where I had seen brown rice and bought a bag, which I delivered to a rice expert for her analysis. I showed her the rice, and she explained that the brown rice I had bought was from a different seed (similar to how yellow corn has to grow from a yellow kernel and red corn has to grow from a red kernel) and how the product was too expensive to be sold in Nicaragua. (Understandable, considering how a 1 lb. bag of brown rice cost me $3, while a 20 lb. bag of white rice probably would have cost 50 cents.) Brown rice is produced only for export, which is why no one is aware of it. This is one sad and frustrating situation we encountered over and over again in Nicaragua: dollars are more powerful than cordobas, so the best quality, most delicious, most healthy Nicaraguan products are sent to the U.S.

Also, I learned that noni (just like lime) can solve all the world’s problems …

… if it does not kill you first: 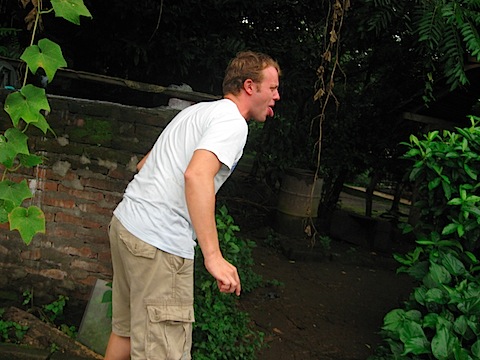 The only way we were able to stomach Noni was boiled and then mixed with mango in a ratio of 10 mangos: 1 noni.

Somehow I’m not sure that Noni’s power was able to survive all that abuse.

The major reason we did not die of heart attacks in Nicaragua was the fruit. Conveniently, Erik worked on an out-of-season coffee farm … which meant he spent his days weeding and collecting fallen fruit.

And serving me the bounty: 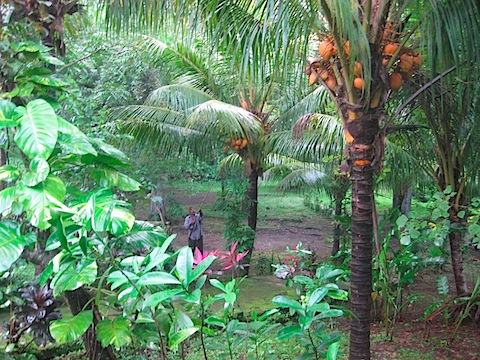 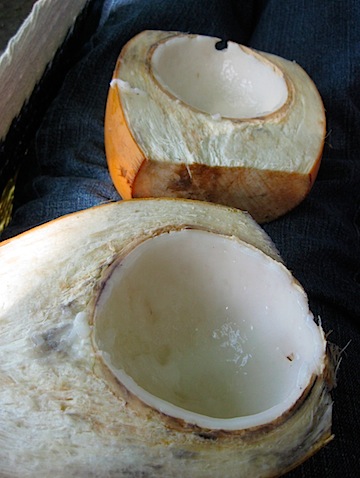 So … I hope that was informative and interesting. We also did many things in Nicaragua aside from eat, and I would be overjoyed to make recommendations if you’re considering a trip there. For now, my fingers are tired of typing. Go eat a coconut!!