We finally have two girls in a bedroom together!

Actually, they’ve been sharing the room since early April, but who’s keeping track? I reached a point when I couldn’t stand having our hallway hijacked by the transitioning guest room mattress, so I sent Erik and Bebop out for a Saturday walk, strapped Freja to my back, and got to dissembling and re-assembling some beds.

My feeling that first night when they were both asleep, safe and sound in their cozy, cocoony, colorful room … all the heart eyes.

Of course, Freja still woke up every 45 minutes and then ended up in our bed from 11pm on, per usual. Poor Beatrice woke up so sad in the morning when she saw the empty crib. “Where’s my sister? I want my sister in my room with me!” Sigh! You and me both, kid.

Over the past couple of months, we have been working on getting the walls up to speed with the rest of the apartment (read: full and overburdened). Beatrice had some very strong opinions about placement, which we honored for the most part. 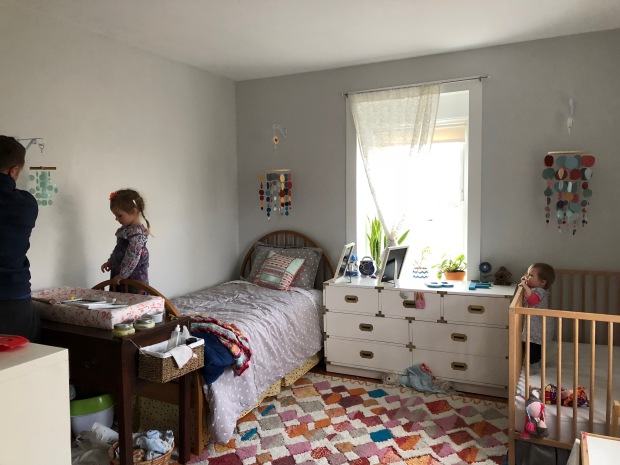 As usual, though, Grammy had the strongest opinions and called most of the shots on wall decor. Thank goodness! I can edit the heck out of anything you give me, but blank slates put me over the edge.

Here’s a little counter-clockwise spin around the room as it stands now.

Freja’s side of the room is first with a hanging quilt from my childhood that was trapunto-stitched by my Grandma Lil. On the wall over her crib, we hung an “F for fox” alphabet card, the Runic alphabet from G’amma Diane (including Freja’s letter “Frey”), some special art brought in from the former nursery, and a photo of the sometimes-crib-dweller herself. 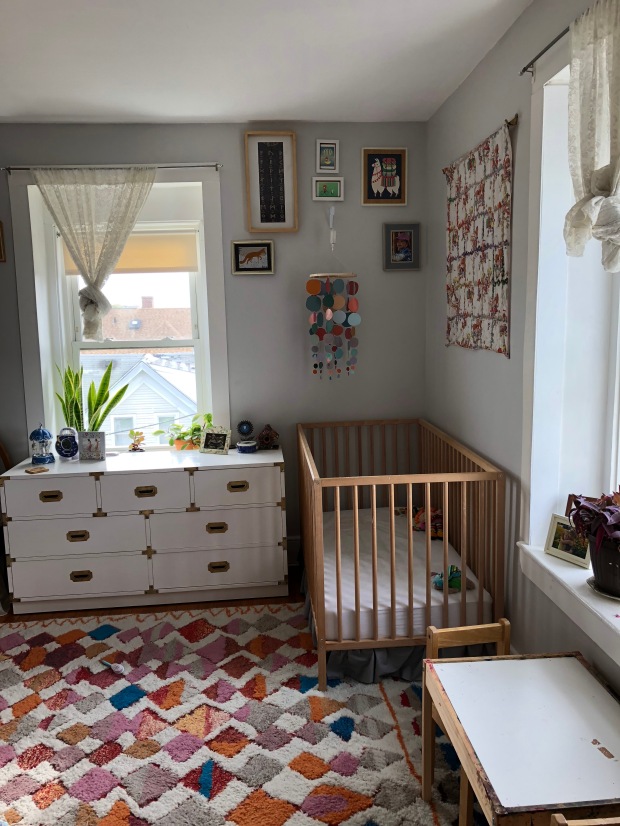 On the other end of the campaign dresser, Beatrice’s side of the room has the rest of the nursery art, including her Queen Bee alphabet card (for obvious reasons), Etsy prints, her baby shower invitation, her portrait, and another trapunto quilt by Grandma Lil.

The changing table fits perfectly flush against Beatrice’s bed and has a stained glass mirror (also by Grandma Lil), the capiz chimes from the nursery, and the ocean-themed alphabet cards from the nursery.

For now, the glider is nestled into the closet, but will someday take the place of the changing table or leave the room altogether, and the closet will turn into a reading nook.

The shelf arrangement and art on that back wall are still in progress. That lamp shade needs a cute lamp, and the general organization of it all needs more work. The watercolor by my mom feels sort of lonely, but it is also nice to have a spot with some open wall space. 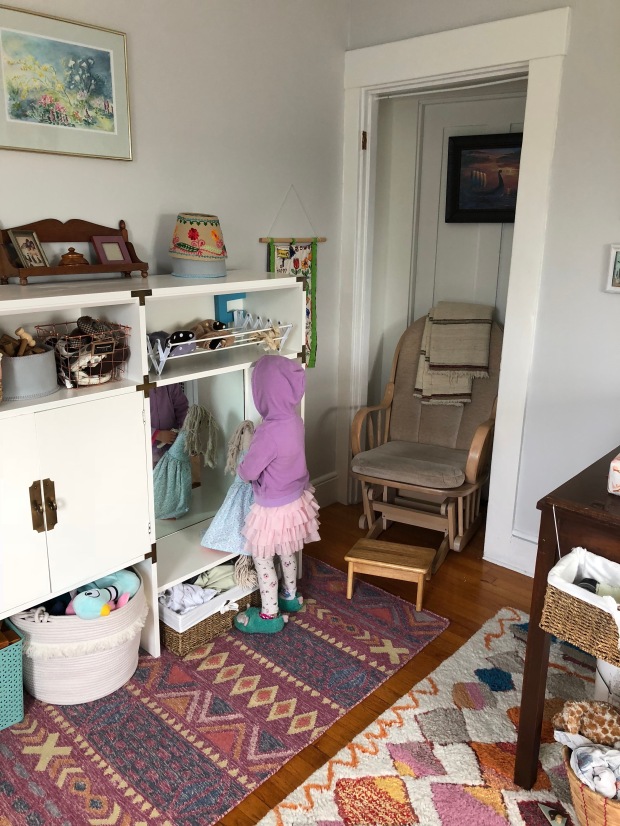 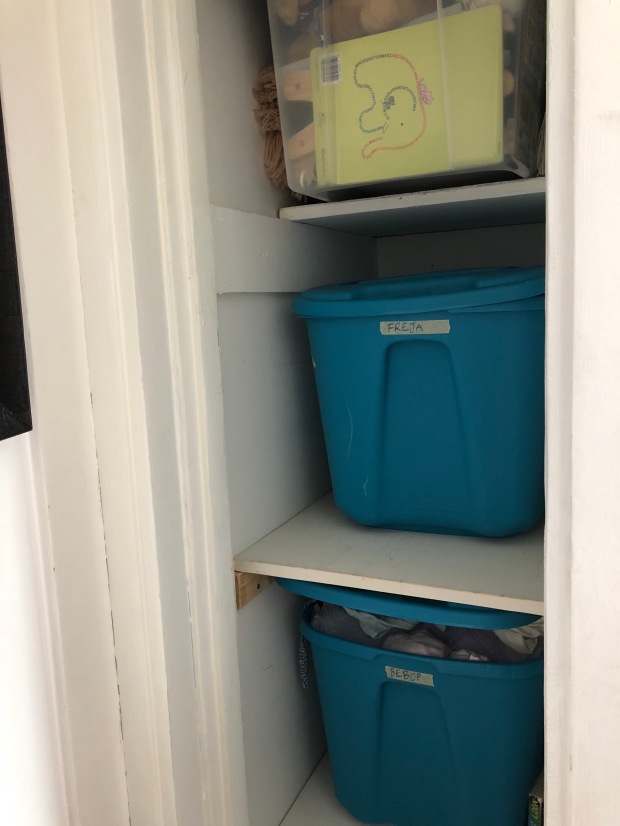 Beatrice’s wall of art, doll house, and puzzle table are just inside the door to the room, and that dream catcher on the door is another relic rescued from my childhood.

In terms of logistics, having the girls share a room sometimes requires a nighttime shuffle, with Erik and Beatrice reading books down the hall in the “new” guest room while I get Freja to sleep. The guest room also comes in handy for when Beatrice is craving alone time and can’t get it in the new shared room. I have been keeping a basket in there with her journal and crayons, some books, and sticker activities for when she wants time by herself. Final guest room arrangement is still a work in progress, but it is totally functional and already a frequently-used space. 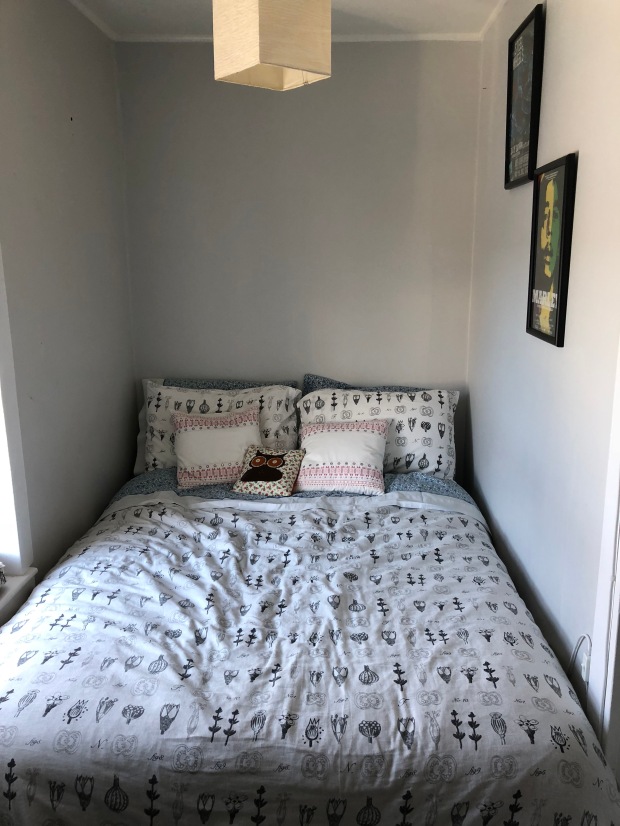 All nights, I feel like I am spending an eternity breastfeeding multiple children at bedtime and another eternity attached to Freja at the nipple once she moves into our bed, but I know I will look back and miss it someday. I never thought Beatrice would sleep through the night, and now it’s the norm. If it happened for her, it can happen for anyone.

One thought on “Two girls in a room!”