This afternoon, I worked on prepping a few more items for the party: 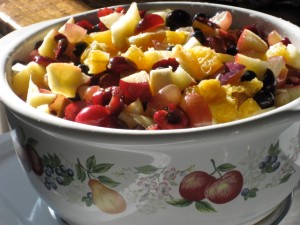 Fruit is so pretty:

I think I took about 25 pictures of this fruit, but I won’t make you look at them all.

And then people arrived for the 19th annual Pickin’ & Eatin’ Party. I know, I know. You’re saying, “Pickin’? I thought this was just going to be a food party because that’s all this girl ever talks about. What’s this about pickin’?”

And back to the eatin’: 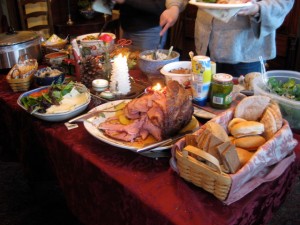 I put my food on a little plate so it would look like more. But then I refilled it four times with things like pineappled ham, sweet potato custard, fruit salad, green salad (with sunflower seeds, feta, kalamata olives, mixed raisins, dried cherries, walnuts, balsamic vinegar, olive oil), baked rice pudding, Swedish meatballs, baked chicken, kielbasa, apple dumplings, apple bread, chickpea spread, and probably tons of other things I can’t remember. And then I picked at the desserts too much (significantly more than pictured): 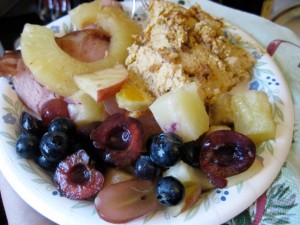 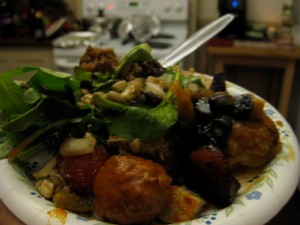 And now I’m heading back down to rejoin the party and very likely do some more pickin’ … at the food!