Initially, Saturday looked like it was going to be a brilliant day with perfect weather, hot yoga, two baby showers for two dear old coworkers, Gina’s block party, Tara’s BBQ … until I realized I was way over my head with my final paper and had no choice but to completely clear my schedule.

I was up at 7 for an early start, but I had to take a mid-morning break to go pick up the CSA because produce waits for no one!

This week, Kate and I each got romaine, arugula, six ears of corn, 3 eggs, broccoli, green onions, baby turnips … 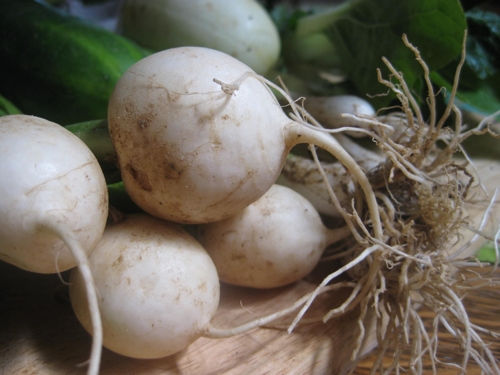 I decided to process the produce salad-style, so I washed and combined the romaine, arugula, and some balcony arugula and set it out to dry. In a separate bowl, I combined three ears of raw corn kernels (again, this has to be the sweetest corn I have ever tasted!), the chopped baby turnips (they taste like radishes!), some chopped green and white cucumbers, 3 chopped green onions, roasted broccoli (with herb-infused olive oil, balsamic, salt, and coriander), braised bok choy and turnip greens, and some edamame I found in the freezer: 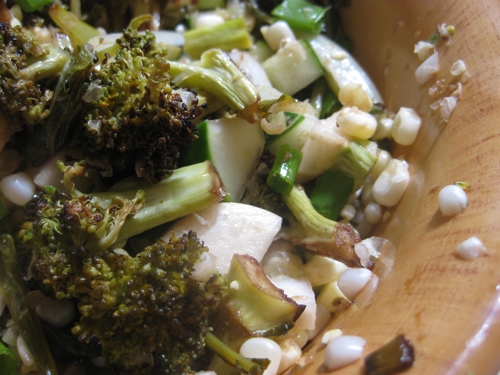 I’m obviously doing my part to support corn and soybeans, the two most impoverished crops in the country 😛 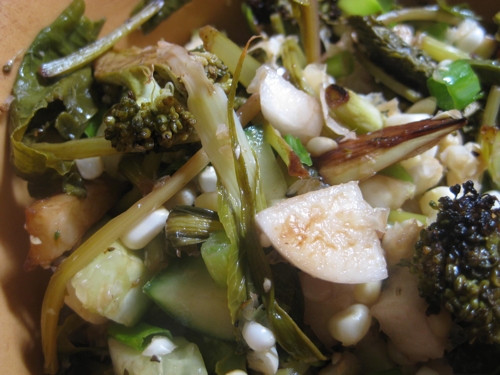 I landed that salad mix on top of the greens (romaine and arugula) to have for lunch all week long. I love fresh food! (Does anyone not?)

I bookended my CSA trip with two mini breakfast cookies to keep me motivated. Friday night, I had mixed 3/4 cup quick oats with two melted watermelon ice cubes and a tbsp peanut butter. I divided the “batter” into two balls and flattened the balls into two cookies. I had cookie #1 as I was working on my paper pre-CSA:

I frosted the cookie (because frosting is always critical) with a mix of date bliss and yogurt and topped it with a sprinkle of ginger:

Post-CSA, I had cookie #2 the same way, but frozen (frosting and all) and over plain yogurt with a pile of blueberries on top: 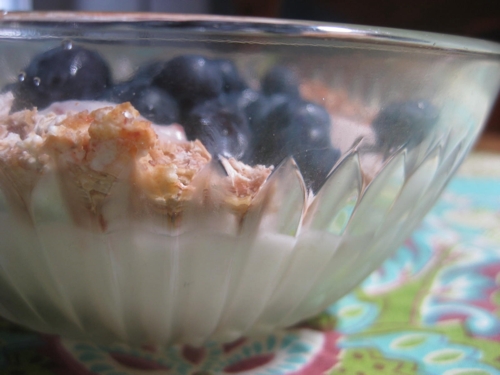 Bloobs (obv not from the CSA):

After this brunch of sorts, I wrapped up the latest installment of “Sarah’s Twice-Baked Cakes” (thanks for the name, Julie!) and headed over to Prospect Park to drop it with Tara for her BBQ. I was so tempted to stay, but I said, No, Sarah, there is too much work to be done!! Instead, I headed over to Hanco’s for three hours of distraction-free coconut bubble tea. I know I have all the tools to make it at home, but sometimes a little peace-and-quiet is worth the $5! (Except for that one girl who was talking SO loud to her friend for at least an hour and driving me insane because I really didn’t need to know every detail about how she taught her dog to cross the street and how she couldn’t tell the difference between people from Long Island and people from Staten Island and how she could tell the difference between people from different parts of the midwest because she is from MN, and on and on and on.)

Once I had gotten all I could out of Hanco’s and was teetering on the precarious ledge of buying another bubble tea, I decided to cut my losses and head home. On the way, I stopped in at Union Market for samples (Iberico and gouda cheeses, marinated mushrooms, gardiniera veggie mix, sun-dried tomatoes, cippolini onions, and frosted cupcake pieces) and actually got suckered into buying something – GASP2009!!

I dug right in in search of oatmeal cookie pieces, but it seems the cookie pieces were blended in along with the cinnamon:

I kept digging just to make sure. Oh wait, what’s that little dark spot? My heart starting racing with anticipation …

Even if I was missing a cookie crunch, though, I could definitely taste the cookie influence in the gelato … and it was delicious! Before I accidentally ate the whole pint, I made the wise decision to engage in a little linner action. At this point, I had been dillydallying for far too long and decided I needed to make something quick and easy that wouldn’t trick me into spending four hours cooking: 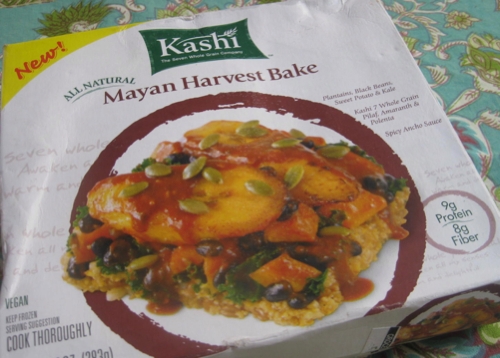 If only they could have thrown a little avocado in there, I might have just died on the spot! Of course, I could have gotten an avocado at Union Market instead of the gelato, but hindsight is 20/20 … and I stand by my declaration of the gelato’s deliciousness.

Anyway, this was a microwave meal, and I don’t have a microwave. I unwrapped the package and dumped the block of mayan harvest bake ice into a baking dish:

Twenty minutes later, I had a meal! I had half of the bake over my CSA/balcony greens:

And it was everything I had imagined! Just look at that giant hunk of sweet plantain:

My tummy had started to feel slightly iffy earlier in the day and I didn’t want to push things, so I stuck with just half of the meal before moving onto cake and ice cream 😛 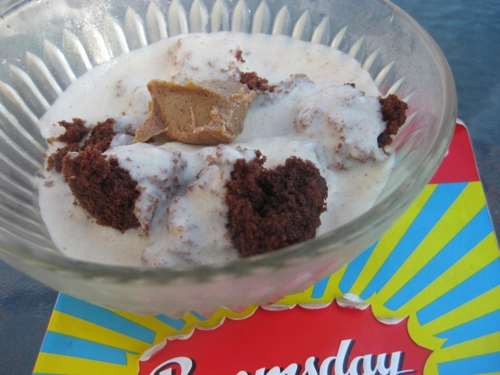 Yeah I thought I got rid of all my cake the other day, too … but apparently I missed this little container of chocolate cake pieces. Oh well, guess I should eat it 😀 I topped the cake with a mix of yogurt and a couple tbsp of the gelato and let it soak and re-firm in the freezer while I did some more work. I finished the research portion of my paper around 8 and decided to be done for the day! I moved out to the balcony with my book, my cake and ice cream, and a dollop of peanut butter and prepared to relax:

Sadly, my tum kept feeling worse and worse and seemed frozen in a larger state of expansion than normal. I finished my dessert (the reasonable thing to do when faced with intense stomach discomfort) and threw myself into bed, planning to wake up fresh as a daisy on Sunday morning! To be continued …

What have you cleared recently?

12 thoughts on “Clear my schedule (and my plate)”