Like I said, I ended up taking Monday off of work because I felt so yucky and out of it — I couldn’t figure out what was wrong with me. As I joked to my old co-volunteer from Peru, Nick, maybe I was having anniversary sympathy pains for all of the stomach trouble I was having there at this time last year! I devoted an entire page of my photo album to the experience:

Little did I know how close to the truth my joke would turn out to be!

Aside from the debilitating stomach pain and somewhat visible stomach bloat, I had no symptoms — everything else was chugging along just fine, grrr. All the possibilities were running through my head: Was the yogurt bad? Was I suddenly lactose intolerant for real? Had I managed to catch some scary old-fashioned disease like dysentery or typhoid, the likes of which have not been seen in this country since the days of Oregon Trail? A quick wikipedia check told me that my symptoms had nothing to do with those ailments (phew!), so what’s a girl to do?! I called my mom, of course. My mom told me to call my doctor. The receptionist at the doctor’s office told me my doctor (who I haven’t even seen yet since my insurance just started last month) was away until 8/10 and they wouldn’t have someone to cover until the next day. Sigh. I drank some ginger tea and went back to bed again. I slept until 10 and was super antsy when I woke up, so I tried to keep myself busy by doing mindless things like cleaning the apartment, etc.

Around 2:00, I thought I detecting a growling tummy amidst all the other tummy feelings, so I had a cup of the flax pudding I had made on Sunday: 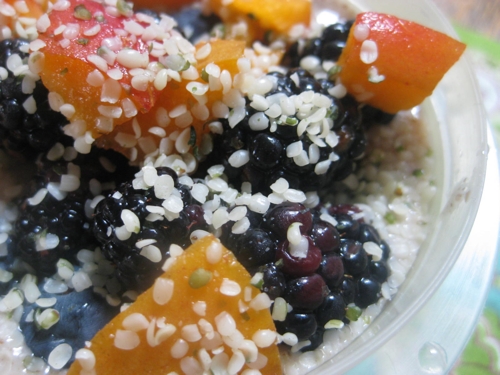 The pudding had a teeny bit of yogurt in it, so I also wanted to see if I noticed any sort of reaction or worsening of my condition in response. I actually felt a little better after eating this, so I decided to rule out the “bad yogurt” scenario.

My mom called to check in and told me to stop trying to make my body process all of this produce “roughage” and to just be nice to myself and have chicken broth. I sort of followed her instructions by defrosting some of my homemade veggie broth along with some of the matzoh balls mom sent home with me after Passover.

With some balcony basil on top to make things more presentable: 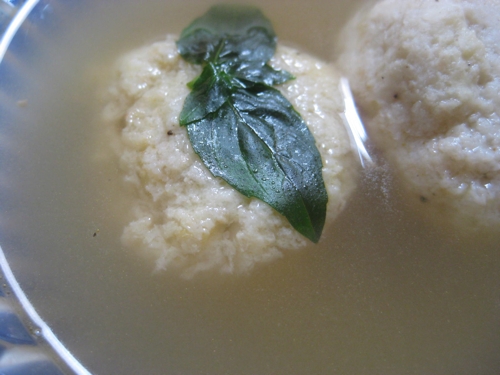 I had a little more soup later on for dinner and then followed it with … ice cream!! (the cure for stomach ailments everywhere). I had about 1/4 cup cinnamon oatmeal cookie gelato, 1/4 cup Stonyfield raspberry white chocolate chunk frozen yogurt (but what are those dark chocolate chunks, you ask?? Ohhh, just a chopped half-square of unsweetened Baker’s chocolate because HEAB is a genius!), and some rhubarb-blueberry compote on the side: 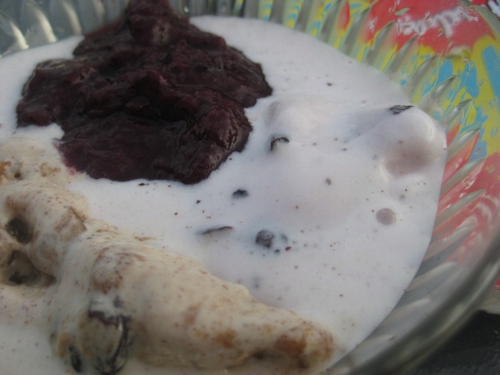 And look what I found: 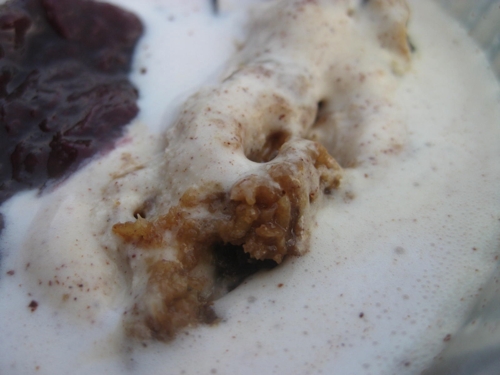 Unfortunately, the stomach situation tumbled precariously downhill from there. I went to bed at 9, fell asleep at 10, woke up at midnight, and never went back to sleep! I knew there was no use even trying, so I did some reading for class, some blog business, read for pleasure, drank ginger tea and ate dry bagel toast, watched early morning TV, and decided at 7:20 that there was no point in staying home again because it clearly wasn’t going to help me get any better. I toasted half of a freezer bagel (I knew there was a reason I had been saving all of these refined carbs in there!) and had some egg and black beans on one part and peanut butter on the other part:

I also packed a bunch of formerly frozen toasted bread for work and class in an attempt to give my body easy (though not entirely healthy) foods to digest. Over the morning and at lunch, I had a big hunk of toasted french bread with butter (unpictured) and half of another toasted bagel with peanut butter:

I also had one piece of this champagne cheddar cheese that Danilda brought down because it just sounded too yummy to say no, tummy issues aside: 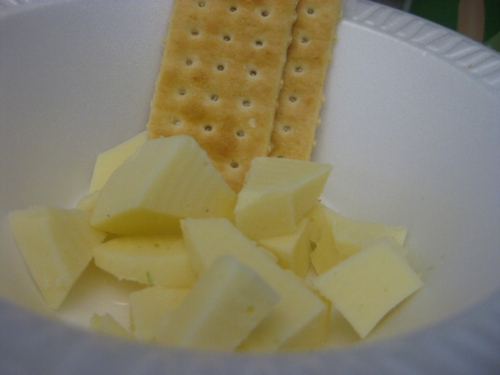 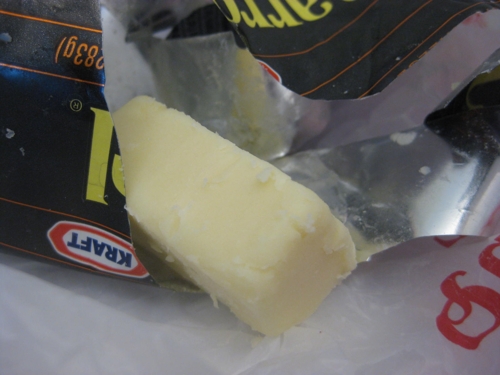 At some point, I called my doctor’s office to see if they had found coverage, and they had not. Awesome.

For an afternoon snack, I split this container of coconut (the man at the juice bar hacked it into pieces specifically for us, so it was soft and fresh and amazing) with Jessica:

Mmmm, coconut has such a mild and smooth flavor, and it made my belly happy 😀 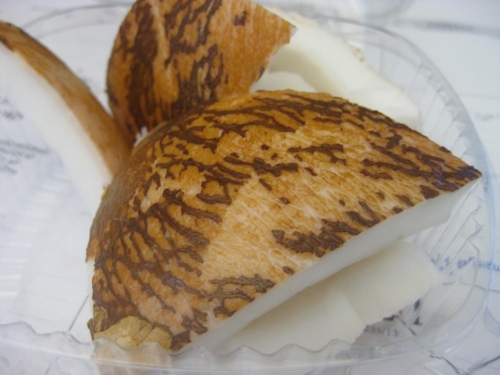 In class, I had more matzoh ball soup …

… with the rest of Lillian’s Maria biscuits for dipping: 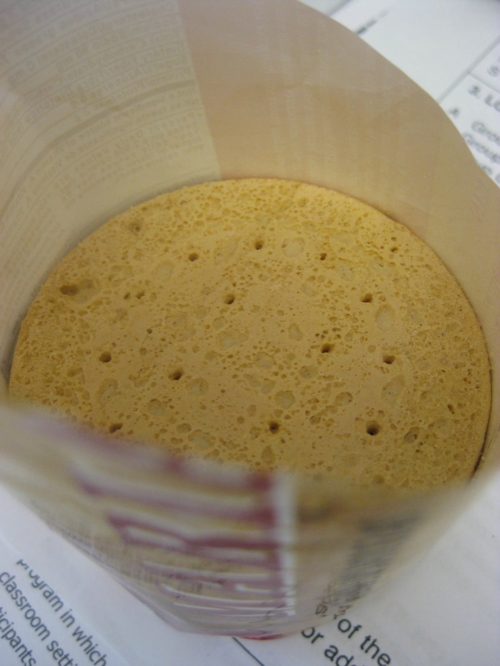 With my class dinner, I drank what I was expecting to be the best thing that had happened to my stomach since comfort: 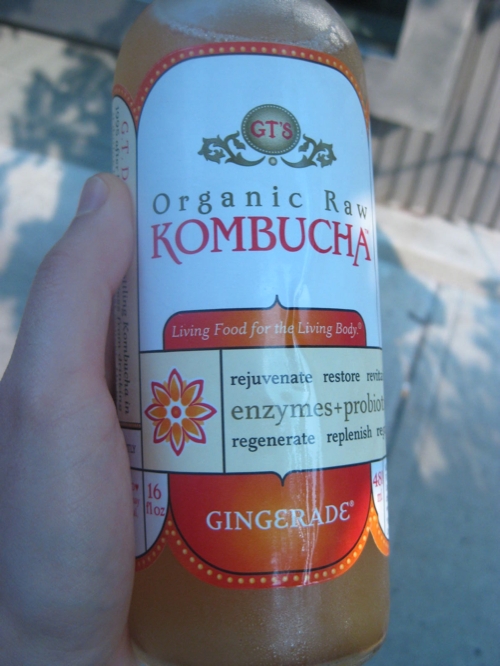 I nearly jumped for joy when I saw this in the deli near school. I really wanted some ginger tea, but I couldn’t find any places with it. Kombucha seemed the perfect solution because it already has good stomach benefits, it’s fizzy, and this flavor had fresh pressed ginger juice as the only other ingredient, and ginger is obviously a miracle worker with stomach ailments:

I was in love from the first sip. It tasted like sushi ginger in juice form!!!! Some people may find that thought repelling, but I felt as though I had discovered the perfect marriage of taste and functionality. My stomach disagreed. Apparently, despite the benefits of kombucha for normal healthy stomachs and ginger’s miracle properties, kombucha’s high acid content is not exactly ideal for an already-irritated stomach. My stomach started to feel as though it was going to rip itself from my belly and sprint across the room. I held out as long as I could but I ended up having to leave class an hour before it was over.

I called my mom from outside to bring her up to date on the latest health info (what would I do without her?!) and then spent the next half hour walking in the downtown direction while I called my doctor’s office again (voicemail said only to call 911 or go to ER if assistance was needed), my insurance (said to call back during business hours or call 911 or go to ER), and the ER. The complications were as follows: (1) I would not be able to see a different doctor without a referral that was approved by my insurance, and neither my insurance nor other doctors’ offices were open at this hour and (2) an ER visit has a $0 copay … unless the patient is admitted and needs treatment, in which case the copay becomes $1000! Ummmmm …

I stopped into deli for emergency tummy settlling snacks because I was still kind of in excruciating pain and it was hard to think straight!

After I opened the ginger ale and took a sip, I immediately thought better of it because I realized that the fake sugars coupled with the fake ginger flavor would probably do my tummy more harm than good. I actually threw the bottle away (horror!) and opted for straight fizz instead:

I got through to the ER finally and was assured that I would not be “admitted” to the $1000 copay scenario without my awareness and consent, and the decision was made. I was off to good ol’ Methodist Hospital in the Slope for some seriously slow motion emergency service. By the time I was called in, I had eaten the entire bag of pita chips — ummmm, that is six servings!!! I was desperate, though — relief only seemed to come while I was eating, and I had to wait for five hours to be seen, 9:30 pm to 2:30 am. Good thing I was not dying.

What is the longest you have had to wait in the ER?

15 thoughts on “The slow room”