So, when we left off on Thursday night, I was going to attempt to recreate Maria’s yucca, a meal that will forever hold a special place in my heart since it represented my first bite of real food in three days. For $1.79 at the Compare Foods next door to my office, I picked up the necessary supplies: 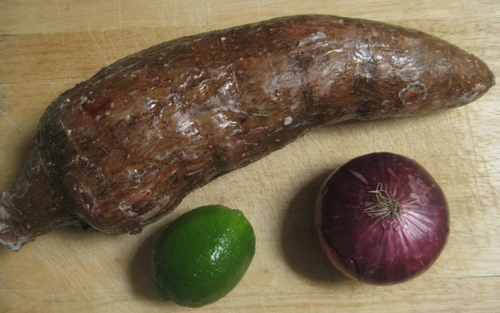 The ladies had given me a verbal yucca-peeling tutorial during lunch, so I followed their instructions to get rid of the “bark.” 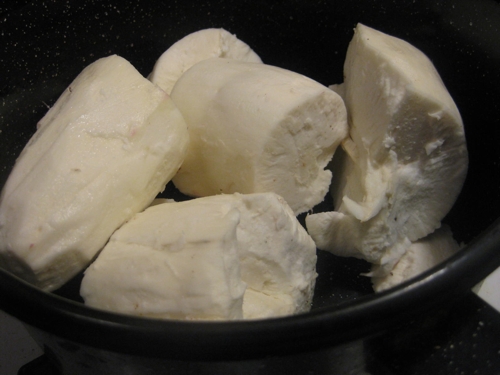 While the yucca boiled in a pot with water and a dash of salt, I started on the most critical component of the dish: the fried onions. I sliced a red onion into thin rings and set it aside while I juiced an entire lime: 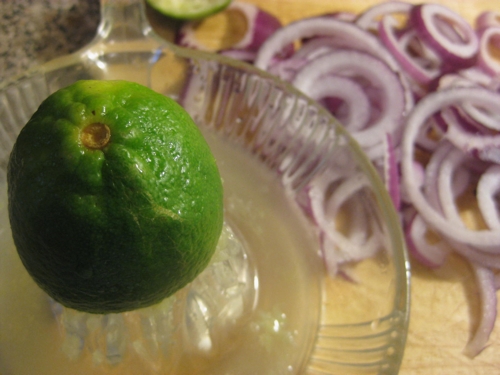 Next, the juice and the onions went into a pan with olive oil until the onions softened: 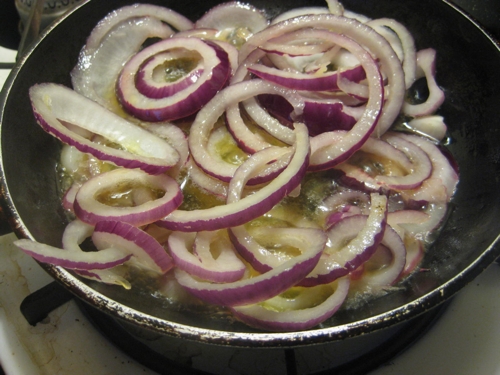 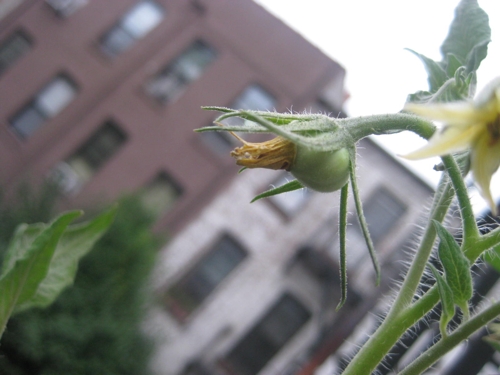 A tomato!!!! In case you don’t understand the magnitude of this development, I’ve been growing this tomato plant from seed since last fall when I saved and planted the seeds from a Farmers’ Market heirloom tomato. I had a bunch of little seedlings growing on my bedroom windowsill all year until my window shade fell down in May and crushed all of them except this one … which is clearly thriving now 😀 I hope I can get to the finished tomato before the squirrels do!

Also, look at what else is holding its own out there: 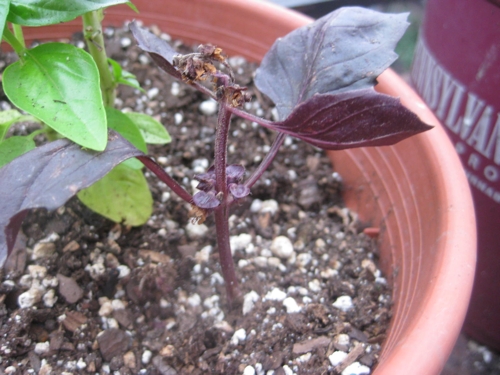 Red basil! I rooted a couple sprigs from my CSA delivery a few weeks ago and planted it last week. I’m so excited that it is still alive.

Anyway, after I stared in awe and pride at my little patch of green for a good two hours 20 minutes, I went back inside to tend to the stove. Here’s the yucca, boiled to perfect softness: 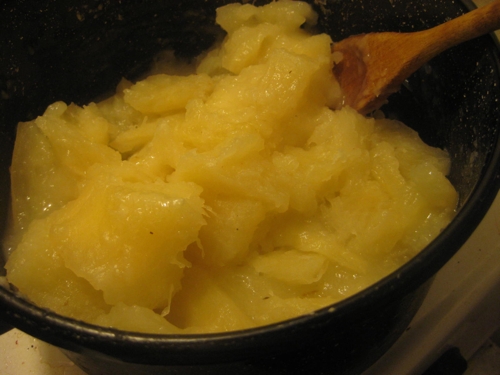 And topped with the limey fried onions: 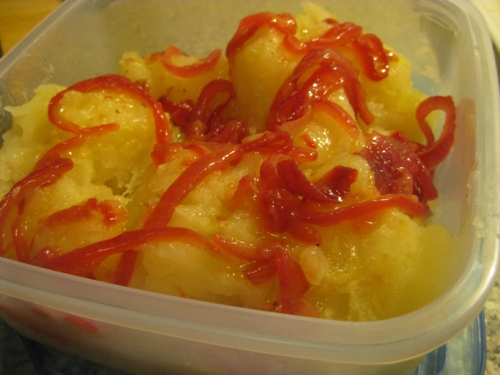 I brought about half of it to work with me on Friday so I could share. I wanted to bring the whole thing, but I knew it wasn’t as good as Maria’s and was worried that my coworkers wouldn’t like it. But they loved it and ate it all!! Now I know — I can bring the whole thing in next time 😀

With the yucca, I had a few bites of Belkis’ chicken and beans (more than pictured, of course!): 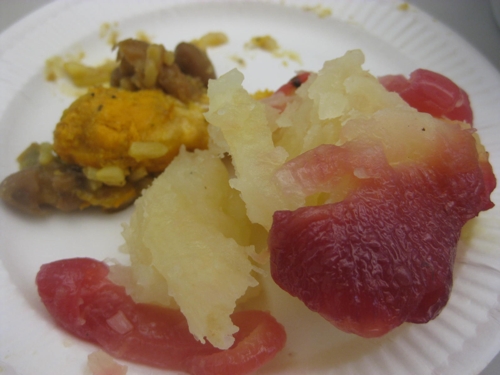 And my CSA salad (I brought in a ton to share — I got behind on my eating due to all the fluids and knew I’d be getting a big influx of new CSA goods the next day) with avocado from Jessica, tomato from Pansy’s garden (she has a real yard!), and cilantro, onions, and avocado dressing left from Sister Pat’s lunch: 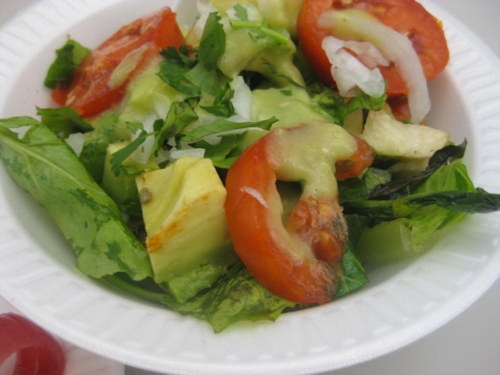 Mmmmmm, it was obviously delicious. I love the teamwork that goes into all of my meals at the office: 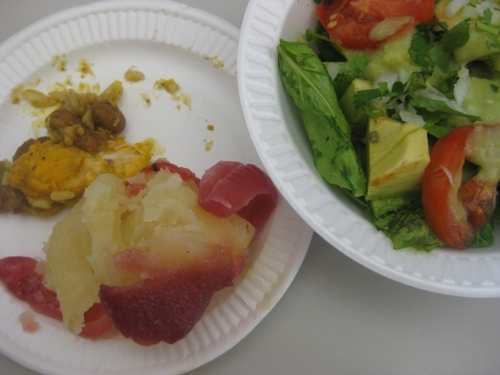 We weren’t done yet, though! Nydia had been about to throw away an unopened quart of milk on Thursday that wasn’t even past its sell-by date because she hadn’t had a chance to drink it. I convinced Jessica to take the milk home with her so that she could turn it into her specialty: 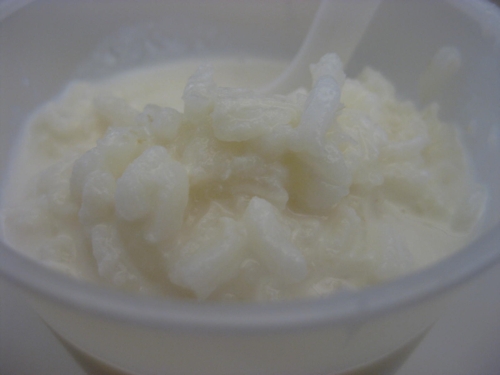 Arroz con leche! Ohhhh yummmmm. I ate a lot of it — more than my fluid-shrunken tummy was ready to handle — but I rallied soon enough so that I could have another hunk of Pansy’s Guyanese coconut dessert: 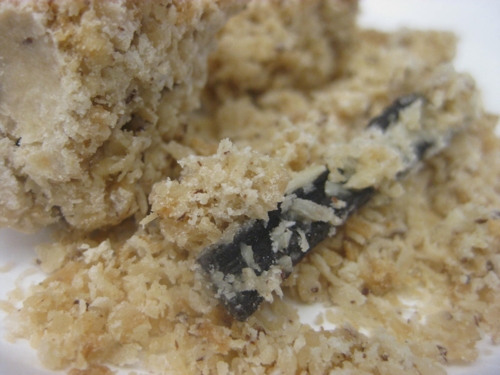 Later in the afternoon, Danilda came down to share this German chocolate bar with Deborah. It was legitimately from Germany, courtesy of one of the agency’s volunteers who had her last day on Friday and happened to be German: 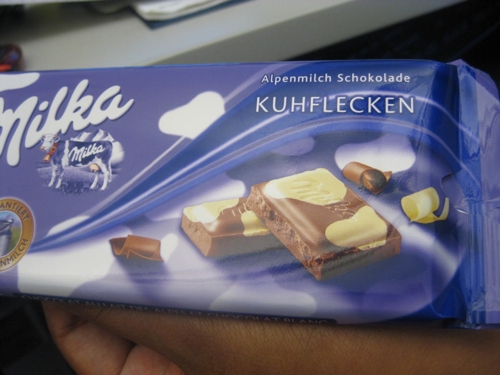 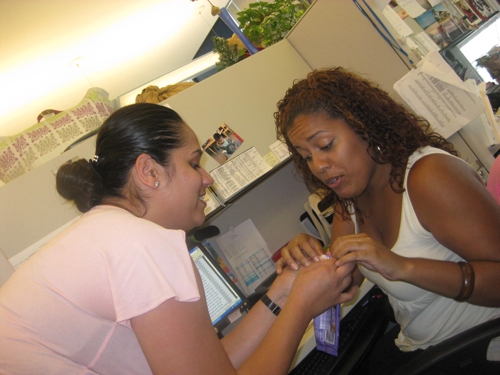 Deborah was so excited to open the wrapper. Apparently, they have easy-open tabs on German chocolate bar wrappers: 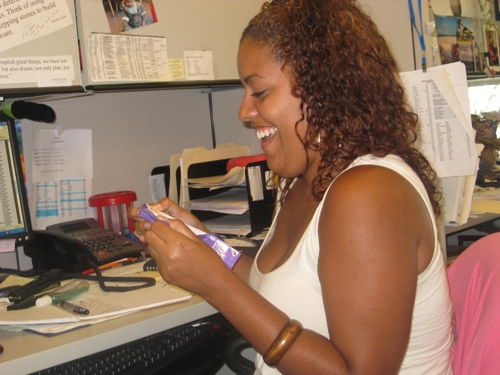 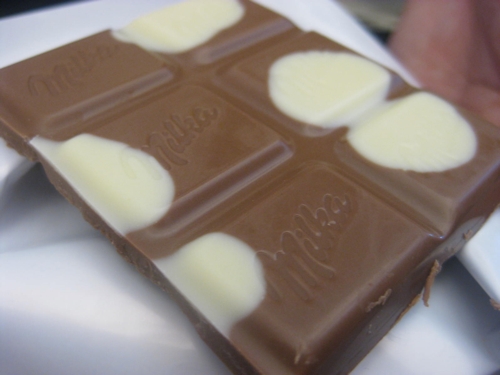 Obviously Deborah shared with the rest of us. Belkis and Jessica wheeled right over to get in on the action, while Nydia looked on jealously from her telephone call in the background: 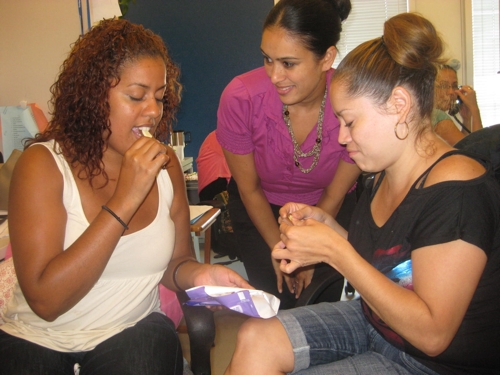 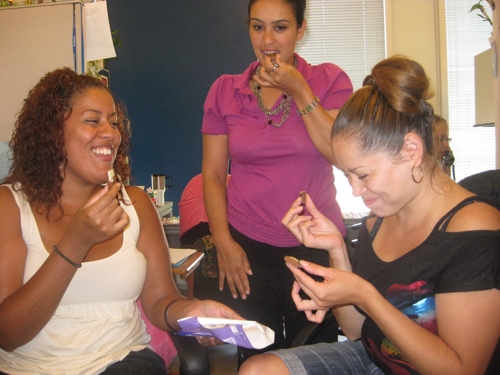 Not being a huge fan of either milk chocolate or white chocolate, I just took one little square and didn’t expect much: 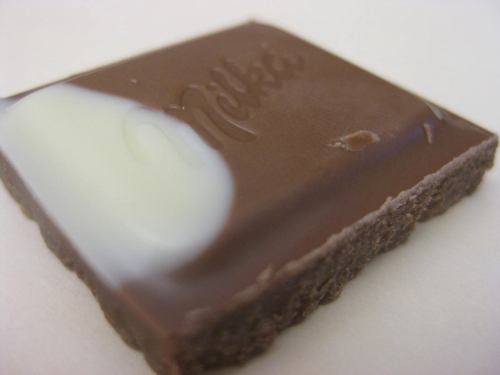 But OMG, what do the Germans put in their chocolate?????? This was insane. Again, as usual, I’m in the wrong country.

Also, as usual, my agency had an “informal staff gathering” at 4:30 to send off this round of volunteers. Here’s the spread: 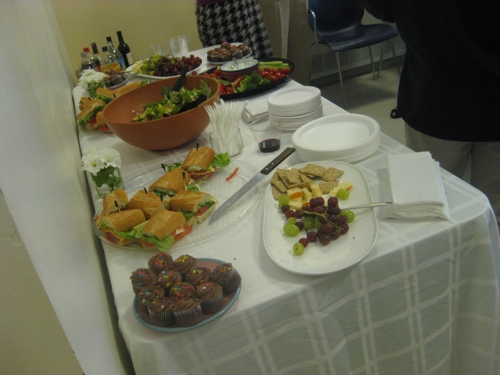 You’d be very proud though — knowing I had dinner plans, I only looked and did not touch! 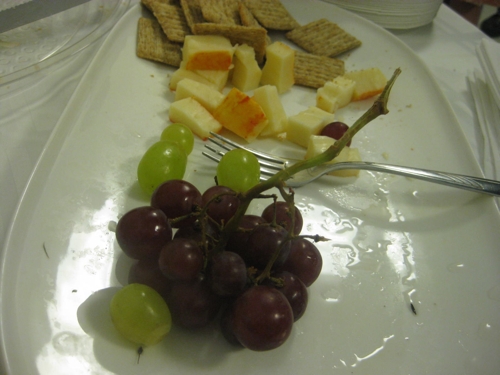 Well, that’s a lie. Beryl asked me to make a plate for her, and I happily obliged: 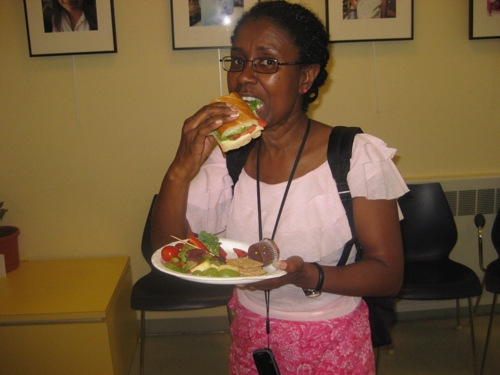 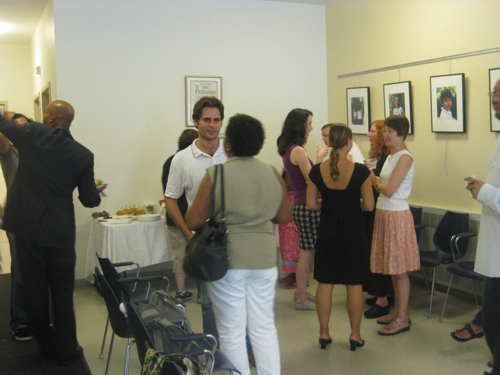 Flowers from the agency’s back patio:

And my white wine spritzer with grapes: 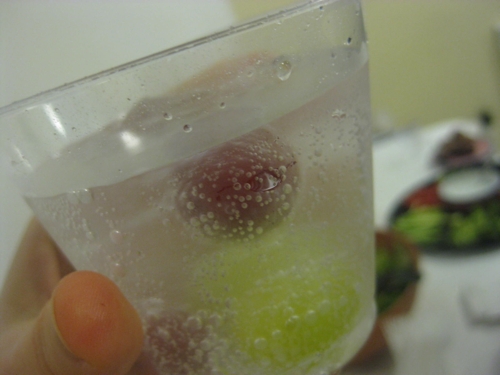 (OK, so I ate some grapes. And cherry tomatoes :-P)

I hung around kind of late while I waited for the rest of my dinner crowd to finish up work so we could head out. In the meantime, I inspected the day’s food pantry delivery from the farm. Check out all the collard greens and corn!!! 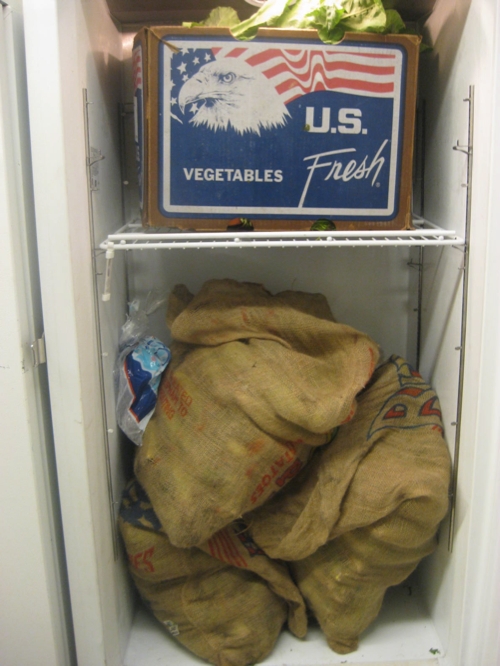 Apparently, there had been a cooking demonstration earlier in the day for the families to show them what to do with collard greens … and I missed it!!!! There’s going to be another one on September 18, though — I definitely marked my calendar for that, so I will be there camera in tow.

We finally left for dinner around 6:30, but this dinner needs its very own special post. I had to miss it when everyone went out to eat at this restaurant last week because I was in MA, so they agreed to go again this Friday just so that I could experience the culinary brilliance, too 😀 Seriously, you’re going to die when you see what we ate!

In the meantime, imagine that a giant burlap sack full of one food has arrived on your doorstop. What’s in the bag?