Well, I certainly did not intend to be gone for over a week, but my life has been hijacked by nonstop activity. I haven’t had time to sleep lately, let alone to blog! Out of control. Anyway, in the interest of time, I’m going to bypass chronology and go thematic. Try to stay with me!

After last week’s greenfest-followed-by-ice-cream-sundaes, things continued deteriorating from a nutritional standpoint while skyrocketing from a fun standpoint.

Mike, Erin Gunn’s fiancé, picked me up from the last subway stop in the Bronx last week Thursday after work, and we drove over to their condo to meet Erin, who was just arriving back from a business trip. Erin immediately whipped up some of her famous turkey reubens to fuel us for the journey ahead: 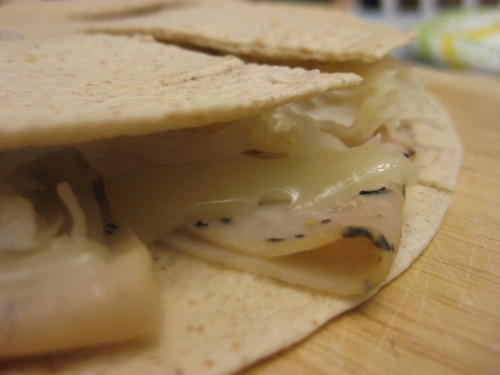 These reuben wedges were soooooo good and melty, especially dipped in some Russian dressing, and they gave me all the energy I needed to sleep through the six-hour drive to Buffalo while Mike and Erin took turns at the wheel 😛 Also providing proper fuel was the big bag of animal crackers Mike had picked up for the drive. Sleeping in the back seat can take a lot out of you, and it is critical to nourish your body to ensure survival in these trying times.

We arrived at Erin’s sister’s house in Buffalo somewhere in the vicinity of 4am and went right to bed. I was installed in the baby’s room (baby had been relocated to parents’ room for the weekend) where I slept until about 10:30. That is a record for this month, as I’ve been averaging about two hours of sleep a night for various reasons. When I got out of bed on Friday, this sight greeted me:

Baby Lily looked on with some blueberries:

The finished breakfast also included brilliantly crispy bacon, CSA fruit salad that I had carted with me from the city, and nutella!!!

I could tell you how amazing the nutella and the fruit tasted on top of the pancakes, but I’d rather just show you:

After breakfast, we had playtime with Lily. Her first birthday was last month, so Auntie Erin and Uncle Mr. Mike brought her some goodies like this new horsey and Ming-Ming, the bath-time ducky in the horsey’s front basket:

Later in the afternoon, we made a critical stop at the liquor store, the highlight of which took place at the check-out counter:

We got back to the house famished and raided the fridge for leftovers of any sort. We turned up part of a quesadilla and chips with sour cream, green salsa, and chipotle salsa:

Garlic herb breadsticks with marinara sauce from the pizza place: 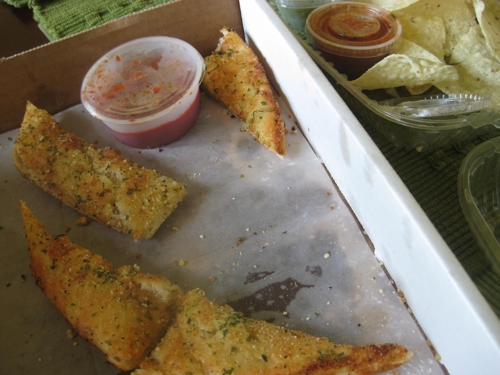 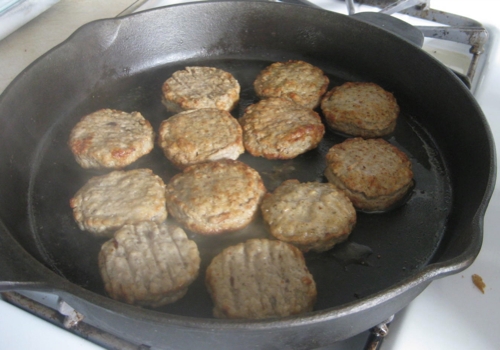 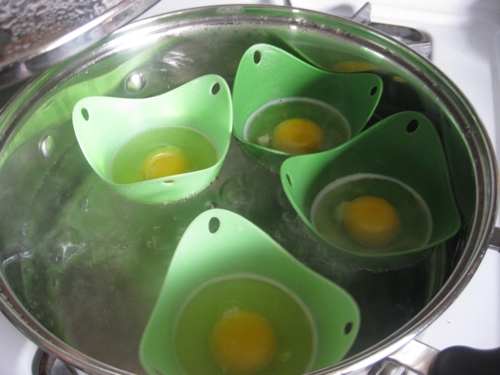 OK, shhhh, don’t tell, but I also snuck in some produce: a spoonful of pumpkin puree (you’ll soon learn why this was lying around all weekend) with a slice of banana (stolen from baby) and a sprinkle of cinnamon:

My breakfast of two perfectly poached eggs (aka, not runny!) over whole wheat toast with two turkey sausages on the side:

And that concludes the veggie-free-meals-eaten-in-the-home portion of the Buffalo report. There’s wayyyyyyyyyy more to come!

What is your favorite veggie-free meal?