Since I’ve been trying to avoid growing out of my already-purchased bridesmaid dress for Erin Gunn’s wedding, I’ve had to make a few cutbacks on my standard eat-everything-in-sight philosophy. By “a few,” I mean that there was one day when an open box of Chips Ahoy was sitting on the conference room table next to my desk, and I did not eat any.

There was another day when Deborah brought in a half dozen Dunkin’ Donuts and put them in that same fateful conference room table location.

I kept my wits about me and wrapped up a blueberry donut (my favorite DD kind!) to take home and store in my freezer until the weekend when a breakfast guest gave me an excuse to go all Brandi 😛

I broke out my last three CSA eggs of the week: 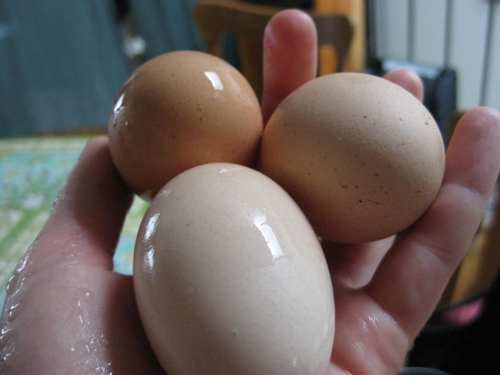 And collected all of my frozen rescued carbs (blueberry donut, restaurant sourdough bread left from a brunch bread basket): 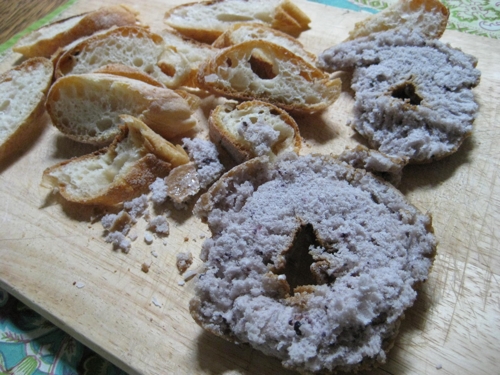 And whipped up French toast extravaganza: 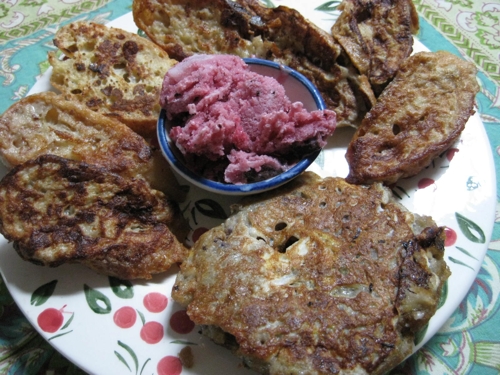 I didn’t have any syrup, so I served the feast with a little side of raspberry sorbet.

Seriously, that Brandi knew what she was doing when she got her donuts in on the French toasting action. This was delicious!

Another thing I haven’t eaten … yet:

Authentic Puerto Rican candy that Nydia brought back to the office from her trip home. It’s chilling in my freezer right now, waiting for a desperate moment the perfect moment.

In my final burst of willpower, I sidestepped the tray of cookies on my first night of Bank Street classes and instead filled up my empty lunch tupperware with the blueberry garnish:

After that amazing feat of fruit collection, however, my willpower took a bit of a hit. We had freshly baked French bread with Laughing Cow cheese in a meeting:

And Cathy came back from her trip to South Africa with a table (that same darn conference room table) full of duty free chocolates for the office:

I made more than one trip to the stash: 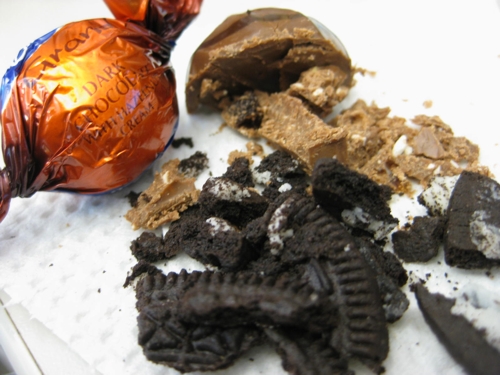 Actually, I made more than five trips to the stash, but let’s not dwell on that. 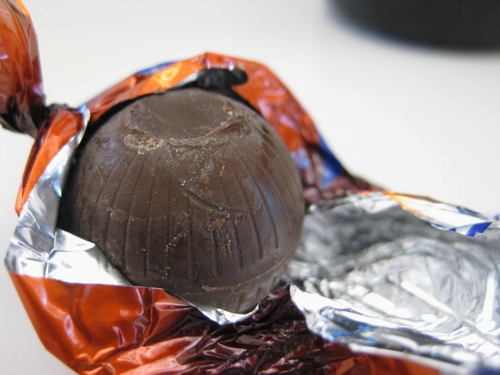 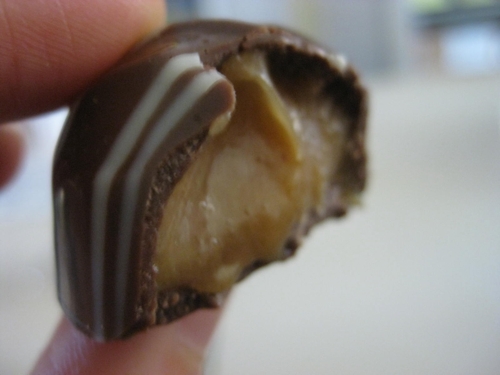 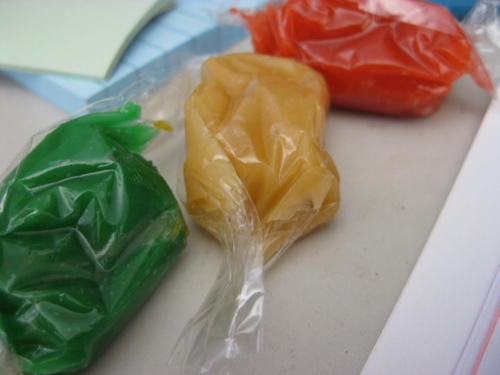 And half of a chocolate-covered graham cracker (thanks, Lillian!):

And a sample of cheesecake from Union Market:

I took a brief break from the fake sugar to enjoy these grapes and strawberries that Katty brought in for Jessica’s birthday:

But I went right back to my old friend when Nydia and Lillian brought this masterpiece to the office to celebrate all of the September birthdays: 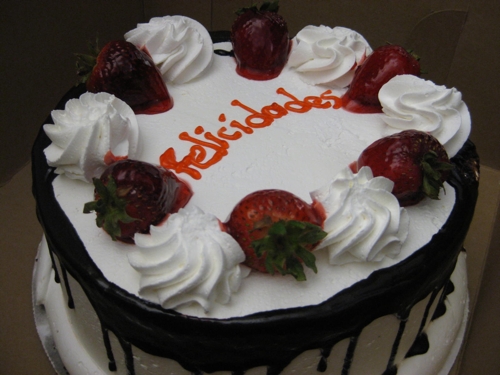 There was even a birthday candle, so I obviously had to get in on the cake action. It would have been rude not to. 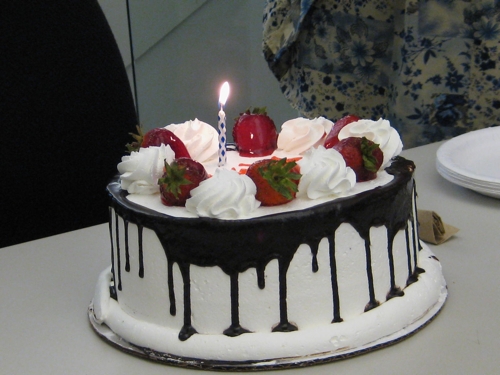 Jessica, Rosalie, and Deborah were the lucky September babies who inspired the celebration: 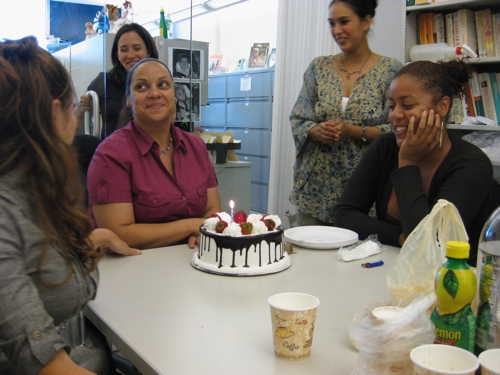 I had to eat and run since it was my class day, so I had Rosalie shove a slice into a cup so I wouldn’t miss out. She didn’t think she could make the cake fit, but I assured her it would work, and it did! 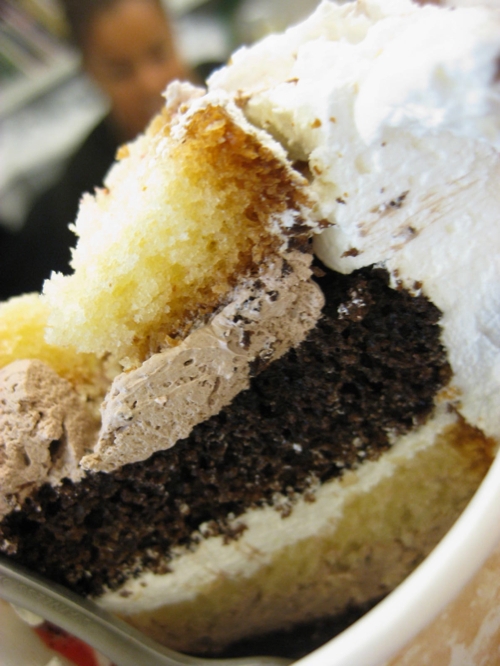 Aaaaaaaand, there was more French bread: 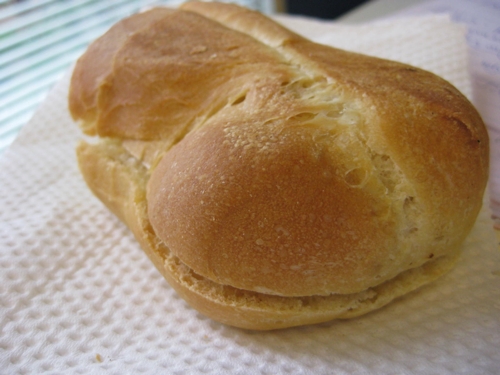 How can I resist when the bread is literally still warm from the oven and filled with all of this melty butter???

On top of these forays into dress-tightening cuisine, Belkis refilled her candy jar with all manner of crazy lollipops:

I had to take a closer look by eating all of them.

So anyway, there were some things I didn’t eat, but there were mostly things I did eat! And now my tummy hurts just from reliving all of this. How about I try some produce????? Hmmmm, what a novel concept 😛 To be continued …

What kind of junk have you been eating lately?