Last Sunday morning, I woke up bright and early to throw some laundry in a machine at the laundromat and then take off on a crisp, fall run. I got in about two miles before I had to flip my clothes, but it felt so good that I went back out for another four while my stuff was in the dryer. I love it when accidental runs happen!

I had brunch plans after the run and the laundry, but I couldn’t help treating myself to a little pre-brunch treat: a jumbo Medjool date stuffed with homemade nut butter and 70% dark chocolate …

Mmmmm, can I just eat these for every meal the rest of my life??? Sadly, I can’t! There’s too much free food in the world, and I need to save belly space to rescue it all. On a mission, I headed into the city for an NYU Alumni Homecoming brunch. Yes, that’s right. NYU does not have a football team but couldn’t stand being left out of Homecoming season. The solution? Free food.

NYU held brunch in the fancy student center that opened up in my last year there, probably just to rub in my face everything I missed by such a narrow margin. Like this view:

(Psssst, that very park is where I graduated on a blistering hot day in May 2004.)

NYU has always done buffets well, and Sunday was no exception: 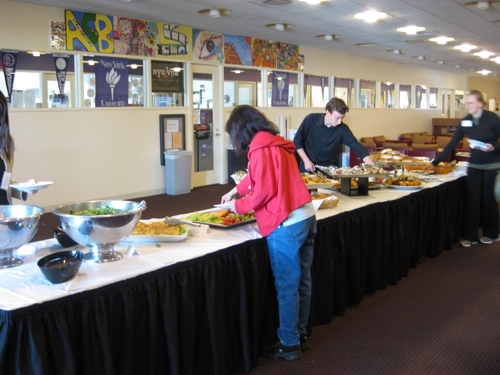 I made about four trips back and forth from the buffet to my table because I didn’t want to miss anything! My tablemates were strangers and therefore unaccustomed to my bottomless pit of an appetite. I got some glances. But I bet they wished they were bold enough to do the same thing … 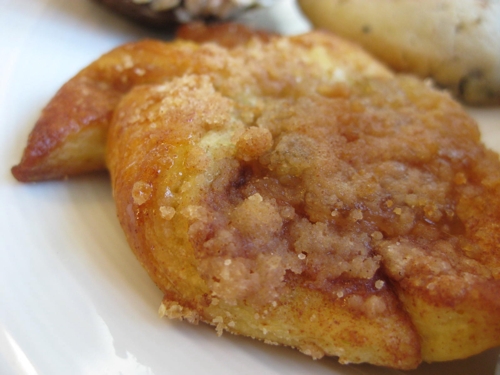 I stayed just long enough to eat. As soon as the plea for donations begin, I scooted out of there … and not just because I am poor. I had a date with some Brooklyn babies!!

I’ve mentioned before that I used to be a director for SCORE! Educational Centers. Occasionally (i.e. not often enough!), I am able to pull myself together enough to coordinate plans to visit with my old coworkers. Deana and Karimah made their blog debut back in March, much earlier in their coincidentally almost identically-timed pregnancies. I haven’t been able to see them since then — I even missed both of their baby showers due to the craziness of my summer session and all of the papers I had due — and apparently enough months have passed that two perfectly formed children now exist :-D. Karimah had Zuri first in mid-August …

These two had better watch out — their moms are already plotting the wedding!

I got to spend a good chunk of the afternoon snuggling with Zuri and AJ while they snoozed on my chest. Holding sleeping babies is my favorite favorite favorite activity in the world. I even like it more than eating, if you can believe that. Deana and Karimah, thanks for sharing your perfect bundles with me!

Since we all met up at Deana’s mom’s house, we also got to experience some of Deana’s mom’s famous home cookin,’ like this shrimp and sausage gumbo with fresh cornbread:

Mmmmm, eating that was fun, too. But not as fun as holding the babies!

What is better than food for you?

2 thoughts on “Better than food”