I know it seems like all I do is hop from one event to another, but the truth is that my kitchen has been out of control. It has been so out of control, in fact, that the thought of trying to blog it all gives me a headache. I pick up the CSA every Saturday morning and then literally spend hours trying to get the food in order and make sure it is all washed so that I don’t overlook some little bug that will eat my lettuce before I do!

A few Saturdays ago, however, I got inspired to document some of the madness …

I had prepared a breakfast cookie the night before with who knows what (but probably banana, peanut butter, unsweetened chocolate chunks, etc). I also let the frosting sit overnight — I think it was a combination of coconut milk, Bob’s Red Mill chia seeds (soooo excited to have chia seeds in my life again), vanilla, and lavender (from the CSA!). After frosting the cookie, I drizzled some honey over the top and threw down a few CSA raspberries.

Next up was a mountain of CSA swiss chard with no home. I did some googling and found this recipe for Baked Cheese Polenta with Swiss Chard. With a few modifications — nonfat plain Greek yogurt in place of sour cream, goat cheese instead of mozzarella, extra CSA greens mixed in with the chard — this delicacy was born: 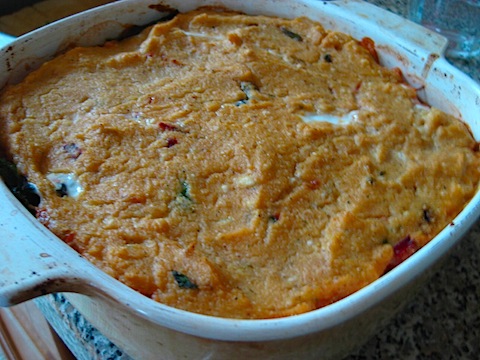 The photo doesn’t quite do it justice, but take my word that it was an enjoyable lunch for the following week!

I took a breather from the cooking for a plate of CSA cucumber (with a beautiful bouquet of CSA flowers in the background):

After the cucumber, I had to deal with the escarole. Have you ever had a bite of escarole plain? It’s bitter and VERY unappealing. For that reason, this Braised Escarole with Garlic and Lemon recipe seemed ideal. I figured that braising something with garlic and lemon would have to knock all the fight out of it!

Honestly, the sauce was amazing, but I ended up braising for probably 30 minutes longer than the recipe recommended because the darn leaves were still SO bitter. I mixed a bowl with leftover brown rice and gave it to my taste tester:

He ate every bite but also agreed about the lingering bitterness. I thinned it out further with two of these CSA zucchinis:

With the other two zucchinis, I embarked on my own recipe for dark chocolate zucchini cake which I created a couple years ago from about 10 different recipes and my own opinions.

Now, this cake is very healthy — in fact, I ate a big slice of it every morning for breakfast — and it also tastes quite healthy. So, if you’re wanting a cake that tastes like cake, you should probably add a lot of extra sugar. If you want something yummy and hearty and satisfying, you can leave it as is 😀 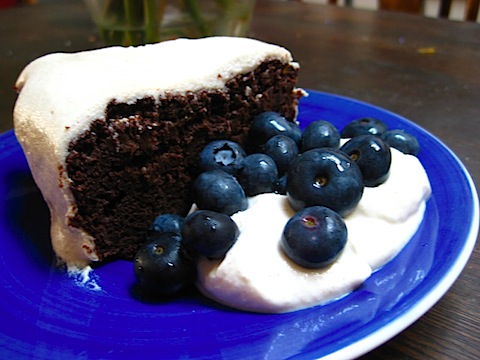 Mix dry ingredients in a large bowl.
In a separate bowl, beat egg and add in honey, mashed banana, melted chocolate, extracts, zucchinis, and yogurt.
Bake 45-75 mins in a bundt pan depending on your doneness preference.
Frost accordingly. 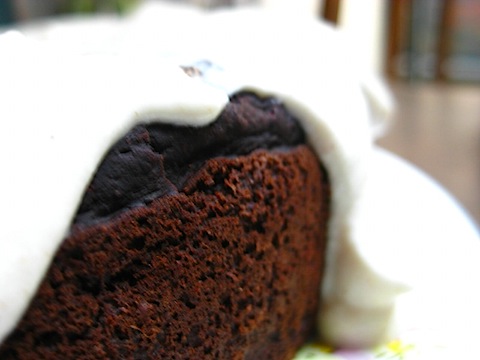 Finally, I miraculously found myself in possession of a waffle maker! Kate had been helping out at her grandma’s tag sale, and the Sunbeam managed to hide from all potential buyers quite effectively. Generous Kate donated it to my kitchen 😀

I sort of used one of the recipes that came in the instruction booklet but ended up modifying nearly all of it, as usual — whole wheat pastry flower instead of all-purpose, yogurt/ricotta instead of sour cream, etc etc.

After all of the folding in of beaten egg whites, I “poured” (this was the thickest batter ever!) the waffles-to-be into the waffle maker in half cup increments: 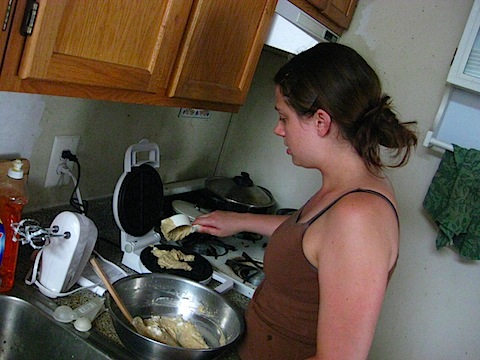 The batter was so thick that I had to flatten it across the waffle maker with the back of the measuring cup:

Thick batter aside, these waffles turned out beautifully!

Three for the growing boy; one for me!

The waffles obviously needed some accessorizing … 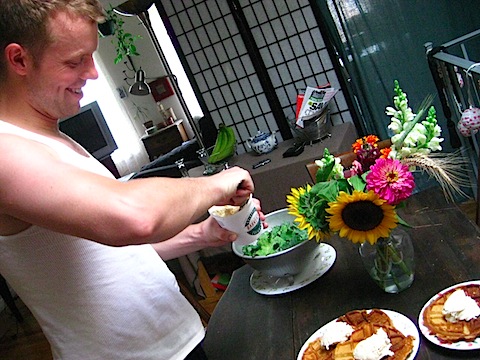 (Notice the admirable salad in the background not getting eaten.) 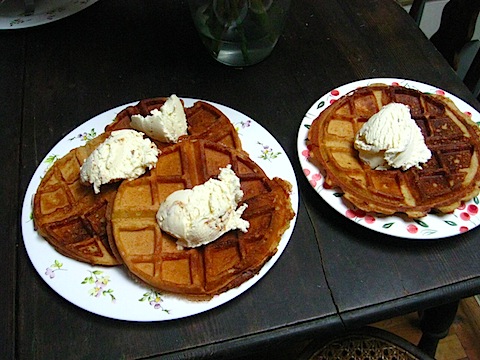 Ahhhhhh I’ve been dreaming of making my own waffles for ages, and now I finally can. Thanks, Kate!

Oh my goodness, I can’t believe I still have more to say. That same day, on the way back from picking up some supplemental groceries, I found a Magic Bullet on someone’s stoop with all the accessories … and the sign: “Juicer/Blender works. FREE!”

I scooped it up of course. (Well, what really happened was that I tried to scoop it up, but my hands were full and parts started rolling everywhere, including underneath a nearby car. I stopped myself from crawling under the car to retrieve, put my treasure down on the sidewalk, and moped all the way back to my apartment over the missed opportunity for a lifetime of smoothies. When I got home, I told Erik my sad story, and he accompanied me back to the scene of the incident with a broom handle and fetched the missing part for me. I then scooped up the rest of the pieces, and now I have smoothies all the time :-D)

While we’re on the topic of appliances I have accumulated as of late, I got this food processor with credit card points and decided that CSA basil-dill-parsley pesto would be an excellent way to inaugurate it: 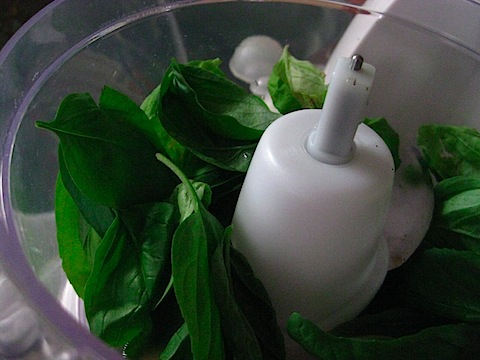 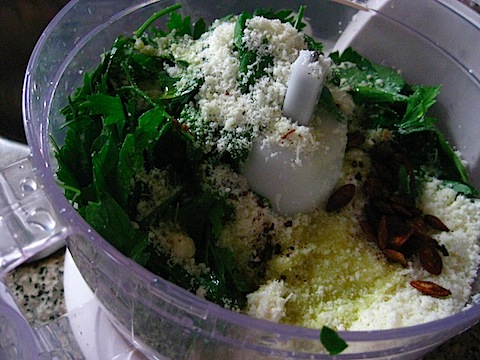 OK, phew!! You’ve survived this marathon post. I was probably cooking for something like eight hours straight that day. Not to knock local and organic eating, but it sometimes seems like a full-time job, ahhhhhhhhh. So, when you start to see over-the-top eating at event after event after event, remember that all of this is what is going on behind the scenes in real life!

3 thoughts on “Appearances may be deceiving”