This winter, I have spent more time in my pajamas than I would like to admit. And far too many moments counting down the seconds until my baby goes to sleep on a Tuesday night so I can finally watch last week’s Bachelor episode online. I am done with looking at the same books and the same toys in the same room all day every day. I struggle to form complete sentences when carrying on normal adult conversations. I want the snow to melt. I want the temperature to stay above 24 degrees. I miss the SUNSHINE.

The winter has not been a complete bust, however. Aside from the super rewarding luxury of being able to snuggle inside with my baby all day long (if only she would actually snuggle! or just rest!), I have learned something. I may have given up on stopping Beatrice from eating the carpet or her bandaid or yesterday’s lunch that is still on the floor where she dropped it, but at least I have conquered the flat diaper.

You might think this is going to be one of those fun posts where I give you 10 non-diaper uses for the flat diaper (it’s a dishrag! it’s a tablecloth! it’s a blanket! it’s a tube top!), but nope. I’m actually going to share how to use a flat diaper as a diaper. Write about what you know, right?

Not too long ago, I would have thought you were speaking a foreign language if you had suggested flat diapers (the kind of cloth diapers that my grandma used on my mom), but I’ve now spent the better half of a year on very intimate terms with cloth diapers and am willing to try anything.

I purchased this pack

of flat diapers about two months ago because I needed six more one-size diapers to complete our diapering stash for the rest of Bea’s diapering days. These dipes cost $10 for a half dozen, and I knew I wasn’t going to beat that price with any other diaper style.

(The price seems to have increased significantly since then. I wonder if there has been a run on flat diapers lately?! They are less expensive here.)

If you’re thinking I must be crazy for spending $10 on a six-pack of wrinkled dishrags, you’re wrong. Or maybe you’re right. I guess I could have just used the actual dishrags I have already or cut up a blanket into 2′ x 2′ squares. But I bought a year’s worth of diapers for $10 and they’re keeping my baby’s clothes dry, so I’m feeling pretty content.

Is this necessary, mom?

When the diapers arrived, I added them to the next few laundry loads to get them ready for action and then went nuts on youtube and photo tutorials to figure out how in the world I was supposed to use them.

I tested out a few different folds … 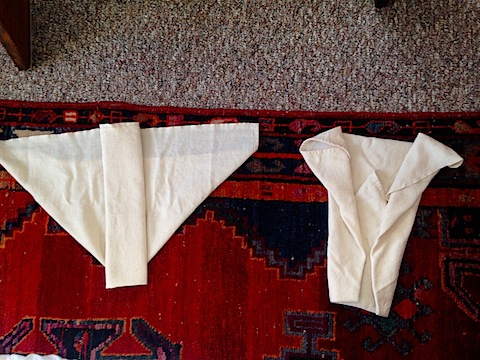 … and decided that the kite fold (on the right) was the way to go.

Step 1: Lay the diaper flat like a diamond. (Of course, it gets less and less square every time I run it through the dryer, but no matter! I just pretend it is square.) 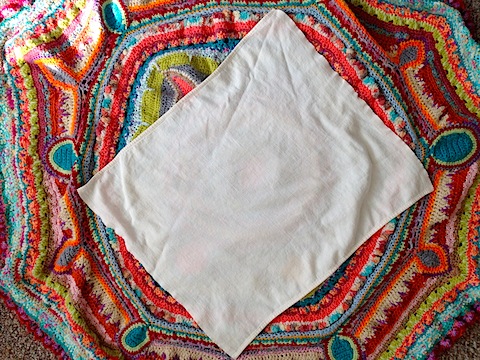 Step 2: Fold each side toward the midline so that the points at the top and bottom are more or less centered. This process is not an exact science, so overlap is going to happen.

Step 3: Fold down the top. Again, since we’re not dealing with a perfect square, some asymmetry is to be expected. 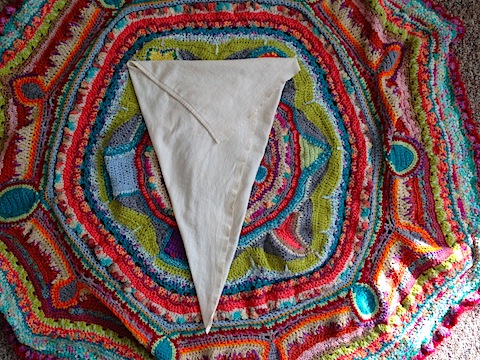 Step 4: I add a padfolded prefold diaper (from Bea’s outgrown newborn stash) to the middle because Bea has some serious diaper-wetting skills. If every baby has a superpower, soaking through diapers is definitely hers.

Step 5: Fold the bottom of the diaper up so the point lines up with the top of the prefold.

Step 6: Fold each side of the diaper in toward the midline.

Step 7: Fold the top inside corners out to the sides to create tabs.

And the diaper is ready!

I actually get everything folded through step 6 right when it comes out of the laundry. At that point, I fold the diapers in half for storage until I am ready to use them.

When Bea is ready, I do step 7 to create the tabs and then get her situated on top of the diaper. I pull each tab up and out tightly behind her, bring them both around the front like I would a regular diaper, and secure it all with a snappi.

Erik says these diapers are his new favorites because they allow for more “creative expression” than the fitted diapers. Of course, he never has anything to do with the diapers before step 7, but I’m glad he takes pride in his diaper tab creation.

And though I may not be able to maintain adult conversation, I sure as heck can put a complicated diaper on my baby and feel accomplished about something. 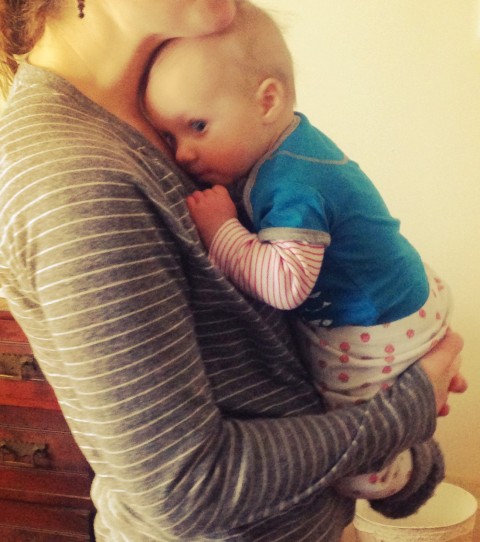 What has saved your winter?