I’ve been begging my coworker Inginia for this recipe ever since she let me taste a piece of the kibbi she made here, and she finally brought it in! I had to try it out right away, of course :-). Inginia got the recipe from a Lebanese friend of hers, and she gave me a copy of the friend’s actual hand-written recipe which was kind of hard to read. I’m going to share with you my interpretation of what I could understand — and my substitutions based on what I had available. It turned out delicious and very similar to what Inginia made, so I think my “translation” was pretty close to accurate!

– 1 medium calabaza, the green-skinned pumpkin that hangs out with other squashes in the produce section of the grocery store (I used a large yam and one cup canned pumpkin)

1. Cut the pumpkin in half, scoop out seeds, and roast face down in 400 degree oven for 45 minutes or until fork-tender.

2. Mix pumpkin with dry bulgur and set aside.

4. In a large bowl, mix onion, red pepper, spinach, garbanzo beans, walnuts (I saved my nuts/seeds to put on top instead of mixing them in because I didn’t have very many), sumac, lemon juice, olive oil, and seasonings. Pulse in a food processor or with immersion blender until coarsely blended.

6. Spread half of the pumpkin/bulgur mixture on bottom of dish. 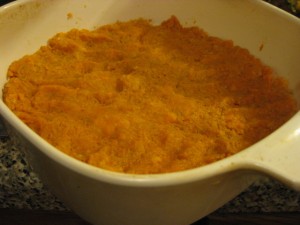 7. Layer on all of the garbanzo bean “stuffing” mixture.

8. Top with remaining pumpkin/bulgur mixture. (I added my nuts and seeds on top of this and used my hands to press them down into the pumpkin a bit.) 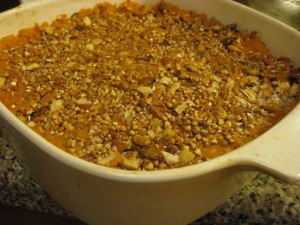 9. Drizzle olive oil over the top. (I forgot to do this.)

** I cut my kibbi into 6 servings. You can eyeball it to figure out the best size for you!** 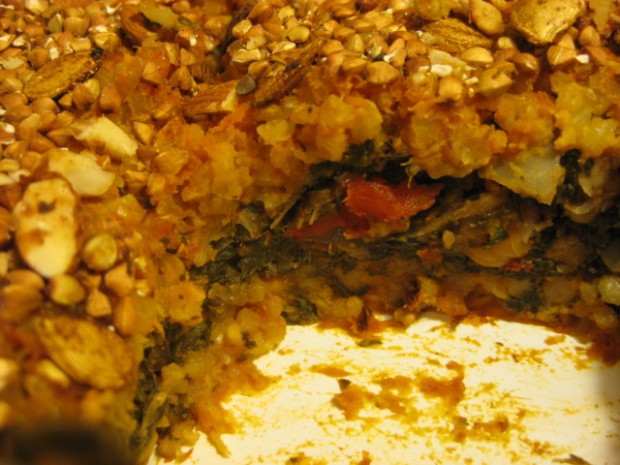