My work holiday party last night was full of dancing and eating: two very complementary activities. The party was at Creole, a restaurant in East Harlem. I was excited when I found out because any party at a restaurant is bound to feature food! Before the dinner buffet began, servers came around with trays of salmon croquettes and vegetarian black bean meatloaf:

I had two of each. The salmon croquettes were delicious — warm and crispy on the outside. The black bean loaf looked and felt exactly like a brownie. I was understandably disappointed when it did not taste like a brownie. In fact, the loaf tasted like a lot of nothing at first, except for a spicy burning that hit after the fact, so I only ate half a piece. But after dinner, the other half was still sitting there in front of me, and it jumped into my mouth. It tasted much better completely cold, so I had another.

The dinner was a buffet of all sorts of things. First, I covered my plate in a mountain of salad (mixed greens, shredded carrot, onions, tomatoes) and then topped it with a taste (ok, more than a taste) of everything that looked good. Clockwise from top left: baked chicken breast, collard greens, vegetarian jambalaya rice, and okra gumbo with shrimp (good thing I had so much practice with okra this week): 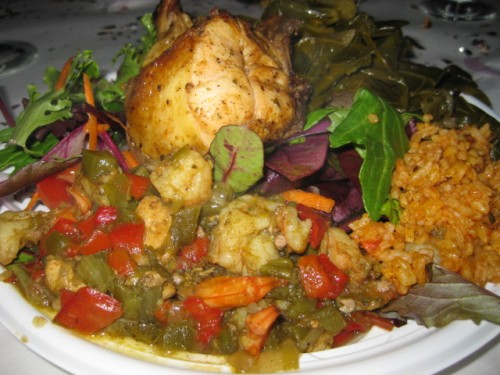 The chicken was moist, the greens were sweet, the rice was sticky and seasoning-packed, and the gumbo was a perfect blend of textures and flavors. In fact, aside from an overly, um, aggressive server during the dancing portion of the night and the restaurant’s policy of no to-go containers during a buffet (like I let that stop me

), the experience was quite pleasant. If I had an income, I’d eat here again.

Between dinner and dessert (wait till you see the dessert!) was dancing. Some artistic action shots:

I love the colors in these photos. The restaurant had such a warm ambience.

So, with dinner (and fruitcake) successfully burned off (HA!), it was time for dessert: sweet potato beignets! They were warm and drizzled with chocolate sauce:

And just look at this gooey sweet potato interior:

I had two (whoops). But they were sooooo good. I wonder if I can figure out a healthy way to make them at home.

Anyway, I feel perfectly satisfied and not at all overstuffed. After events like this, people usually start offering me seats on the subway because they think I’m pregnant, but not last night! It probably helped that I only ate one plate of food … while there. I filled two more plates, but they went right into my empty lunch tupperwares and a plastic bag to bring home. A girl’s gotta do what a girl’s gotta do, and this girl is a student with no tolerance for starving!