Last night, Erin Gunn and I met for dinner at teany, a vegetarian restaurant/cafe (started by moby, believe it or not) located on the Lower East Side. Unfortunately, neither Erin nor I was very hungry. I say unfortunately because the menu was amazing! We settled on splitting the goat cheese and artichoke salad with apples, beets, walnuts, and a sweet balsamic vinaigrette:

And there was SO much goat cheese, yum!! I can’t stand when restaurants skimp on goat cheese; teany was very generous in this respect.

The salad was obviously delicious because you can’t go wrong with that combination of ingredients. One interesting thing to note: the beets were raw! I don’t think I’ve ever had raw beets before. They were cut into strips and, even though I was surprised by the texture at first since I was expecting a roasted beet, I have to say that their firmness complemented that of the apple pieces in a way that mushier cooked beets would not have.

I sill prefer my beets with the stronger earthy and sweet flavor they get from being cooked, but this salad got me thinking about how delicious raw beets would be as part of a crudites platter at a party. I’ve been to loads of weddings with overflowing edible displays of raw vegetables, but I have never encountered one that included beets. Someone needs to get on this ASAP!

Erin and I debated ordering a dessert. Again, neither one of us was hungry (and I’d already had about 30 cookies earlier in the day). But all those cake displays in the picture above were taunting us … not to mention this sign about fresh apple crumble:

How sweet is the decor???

Ultimately, however, we decided to play it safe with a pot of almond black tea (and thank goodness we did, since the rest of my day/night ended up looking like this). The tea even came with a teapot-shaped teabag rest:

(Though we did not use the teabag rest because, errrr, I quickly packaged the used teabag to bring home so I could enjoy the almond tea one more time in the morning. I know, I know, a little bit much even for me. But affordable almond tea is hard to come by!) 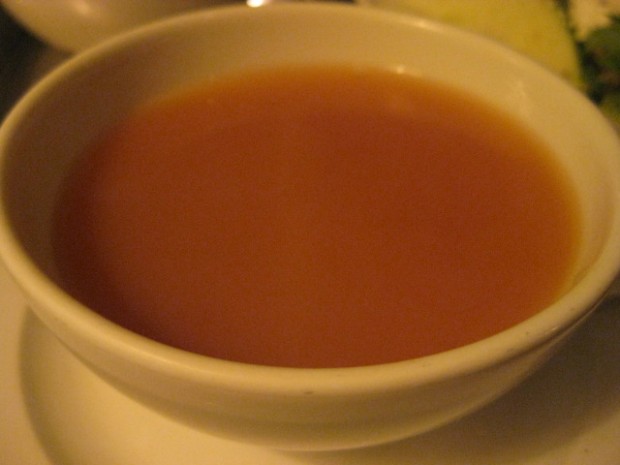 Things from the menu I wanted to try but couldn’t: oatmeal with walnut and strawberries, scone with clotted cream and jam, cheese plate with figs, grilled farmhouse cheddar toasts, chocolate peanut butter mousse cake, carrot cake with cream cheese frosting, chocolate macaroon cake, the afternoon tea special, and the list goes on and on. (All those desserts are vegan, by the way!)