And this time, it’s cupcakes!

Hi — The Professional Vegan here! Two guest posts on Tales of Expansion — I feel so honored.  I have been baking up a storm lately; I foresee the baking frenzy cooling down considerably, beginning right after this guest post.  Today is my co-worker’s birthday, so I made vegan cookies & cream cupcakes to bring to work in honor of her.

I used a recipe from Vegan Cupcakes Take Over The World.  Basically, the cupcakes are vegan chocolate cupcakes with a cup of coarsely chopped vegan Oreo-like chocolate sandwich cookies thrown in (I used Newman’s Own Creme-Filled Chocolate Cookies) topped with vegan “buttercream” frosting with half a cup of ground cookies thrown in — and then half a cookie on top of each cupcake. Here are the cupcakes pre-baking: 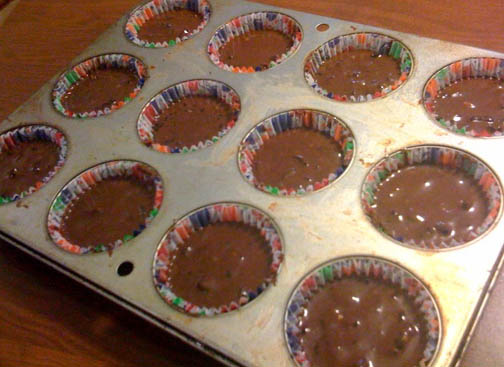 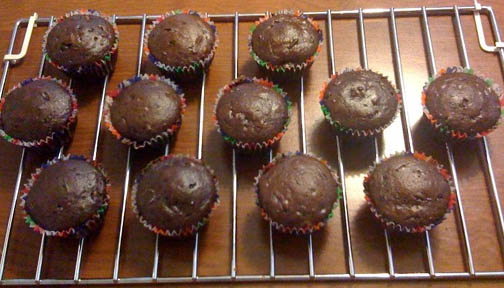 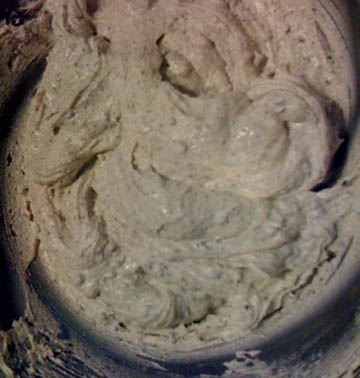 The final product is worth showing twice! Notice the half of a cookie on top of each cupcake, all set to go to work:

The recipe yielded an exact 12 cupcakes, so I didn’t try the final product (though the batter was yummy, as was the frosting). I’ll sample Monday during the festivities.  Thanks for letting me share my kitchen adventure, Sarah! The guest posting really spurs me on in my vegan baking :-).
– The Professional Vegan