OK, confession time: I was prematurely harsh in my comments about this afternoon’s pizza and “staff development” event! I should have known that my perfect internship would not let me down 🙂

But first things first. The second I arrived at my desk, Beryl popped over with the last bite of her coconut rum cake (she let me photograph the banana version on Monday) that she’s been devotedly saving for me: 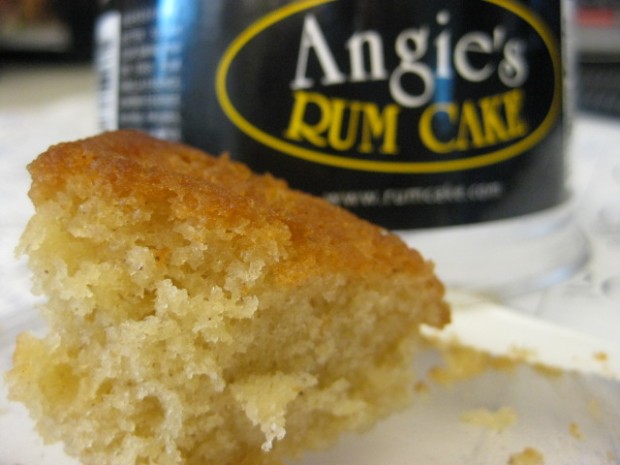 Whooooooeeee, was this cake something! The coconut flavor was definitely there, but so was the rum. Nothing like a shot of hard liquor to get the Friday started …

Before I went into my two-hour meeting with Heather, I snacked on the same best-ever yogurt/fruit salad/golean crunch combo I’ve been eating all week: 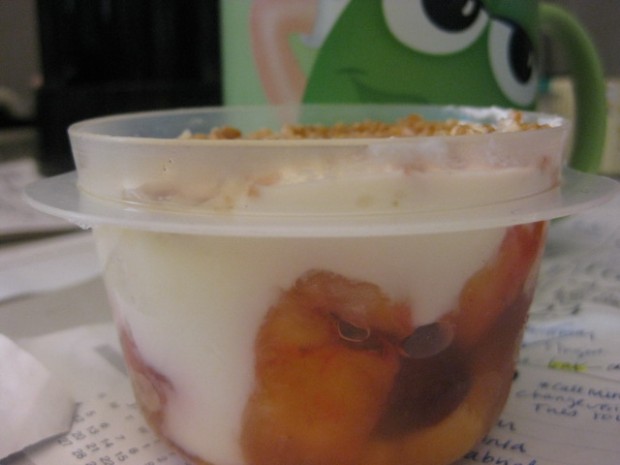 After the meeting, I chowed down on this yummy stick of nutrition that Melissa passed out at the blogger brunch last Sunday:

Even though I knew lunch was imminent (the event was about to start), I wanted to pad my stomach so I didn’t end up eating half a pizza (or a whole one) by “accident.”

I was a fan of this bar — it tasted dense and healthy and was definitely satisfying. BUT, it does have sugar added … something I always think is so unnecessary when dates are involved!

The event started at 12:30, and here’s what was waiting when we arrived downstairs. Five boxes of pizza:

Here’s how I began: 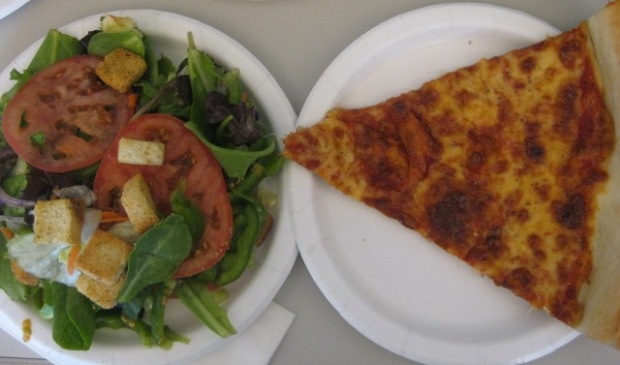 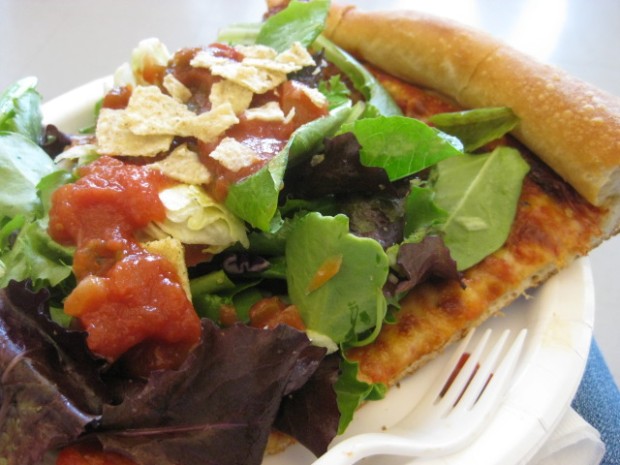 Yes, that is a second slice of pizza hiding underneath the salad (which is topped with salsa and tortilla chips) 😀 This pizza was surprisingly tasty, if quite a bit chewy. I patted down the grease with napkins and ate every bite except for the big pieces of plain crust on the end (I wasn’t sure my jaw would be able to handle them!). The best part was the crispy cheese:

I followed the pizza with two of Heather’s delectable lemon squares: 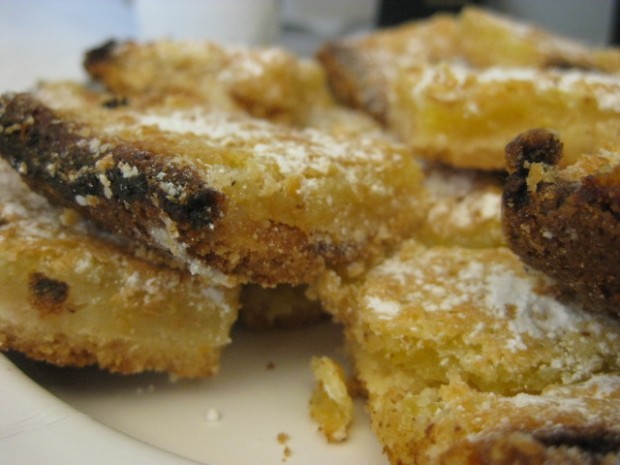 I also had a big bowl of strawberries with a heaping mound of lemon-square-crumb-topped cool whip:

Plus another bowl just like it … except this time I topped the cool whip with a crumbled chocolate chip cookie: 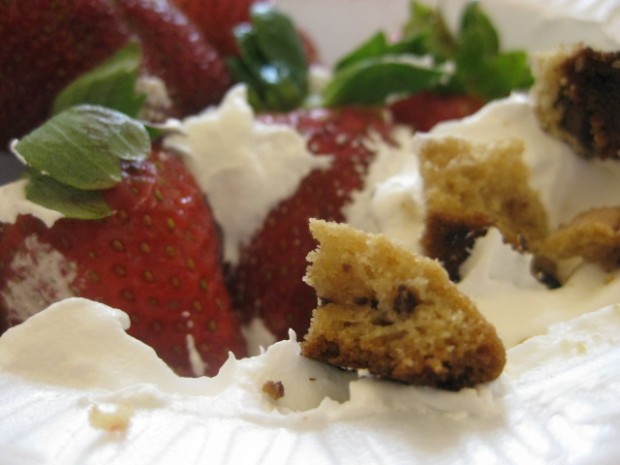 And then I had a homemade chocolate chip cookie straight up.

Throughout the rest of the workshop, I snacked on loads more strawberries dipped in cool whip. Then, I made myself a giant bowl of just strawberries to munch on so that I could be distracted from eating all the cookies:

Interspersed through all the eating was a great workshop! A group called YerbaBuena came to teach us about Bomba, one of the oldest musical traditions of Puerto Rico. The workshop still related to the theme of the book we had to read, but it was much more fun than the breakout groups and role-plays I had expected. 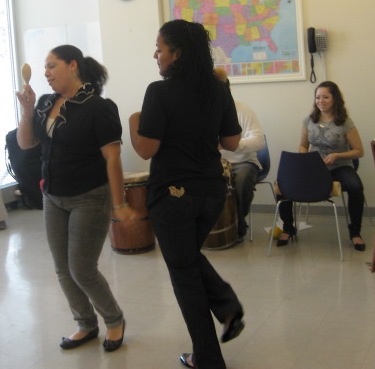 Vianni, Belkis, the workshop leader, Jessica, and Maria went wild on the drums:

Yes, clapping is the best dance move I can pull off.

The day was pretty much over when the workshop ended. I celebrated with these candies (plus another mint):

As Mildred, Pura, and I were leaving (Mildred drives me to my subway station downtown), I spotted this squirrel after my own heart through the windshield:

That squirrel was literally clinging to the tree by his toenails so that he could use both hands to eat the cookie he found on the ground!

I came home to (and brought home with me) a LOT of excitement! A dozen roses from Myrna as a thank you for the help I give her with her papers (AWWWWW!); a cup of strawberries, 4 cookies, and leftover salsa from the workshop; a fun Stonyfield bag filled with yogurt coupons; and a lifetime supply (or close to it) of Newman’s Own Organics products for later review:

I’m not even going to show you the inside of that box because it is just TOO overwhelming (in a good way) … but rest assured that you’ll be seeing everything as I get to it over the next 10 years.

I’m off to discuss yet another book at the book club my friend Amanda is starting — and I’m obviously bringing some Newman’s to contribute to the snacks of the night!

Now that I have so many snackss, I need ideas! How do you or would you use a million pretzels if you had them?? Any favorite pretzel snacks/meals you can suggest?