Well, I got up this morning at 6:30 with every intention of going to work, but things did not work so well movement-wise when I got out of bed … so back to sitting on the ice pack it is. Better safe than sorry!

Breakfast was installment number one of the whole grain and bean protein porridge (hence the goldilocks reference) I made yesterday. After I put all my toppings on, there was only this little teeny slip of porridge peeking through: 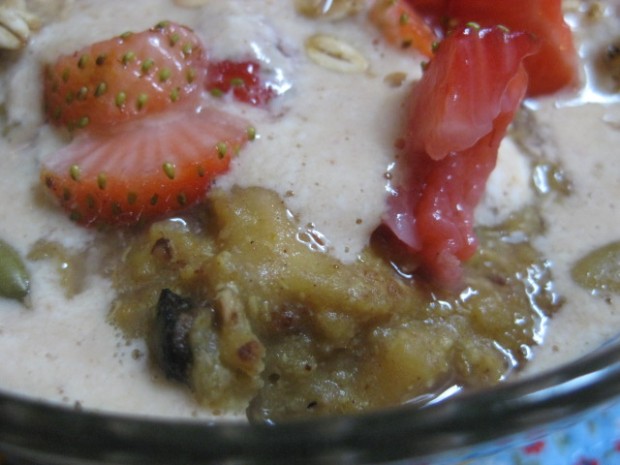 I’m a fan of how this porridge worked out, so here’s the process. In my crockpot, I whisked 2 eggs and a dash of salt into 3 cups of whey left from Greek yogurt. I poured in 1 cup of dry chickpeas, covered the pot, and set it on high for one hour. After the first hour, I stirred in 1/2 cup quinoa and 1/2 cup millet and turned the heat down to low. Another hour later, I mixed in 1/2 cup lentils and let the whole thing continue to cook on low, adding water as necessary (I probably added 3-4 more cups over this time) until the chickpeas were semi-tender, maybe three more hours. (If you’re passionate about having your chickpeas be well-done and mushy, you might want to cook them fully separately before adding them to the crockpot.)

Once I could chew a chickpea without breaking my teeth, I set my immersion blender on the mix and whirred it until things got nice and creamy. Then, I toasted 1/2 cup wheat germ in a dry skillet and stirred that into the mix, too. This made about 6 cups of porridge. I didn’t add fruits or seasonings because I wanted to leave my options open for how to use this as the week goes on.

I was curious about the nutrition on this porridge since I’ve never really made anything like it. Per 1 cup serving: 384 calories, 6 grams fat, 71 grams carbs (12 grams dietary fiber, 2 grams sugar), 22 grams protein. The carbs seem sort of high (that might just be because I’m used to hearing about carbs from the diabetic members of my family), but I love the protein! 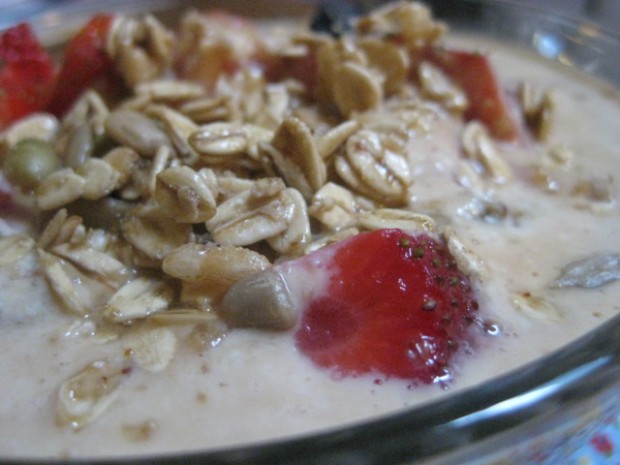 To make this morning’s breakfast, I mixed 1 cup of the porridge in an ovensafe dish with 1/2 banana (some chopped, some mashed), 1/2 chopped apple, 1 tsp homemade extra-dark-roasted cashew-almond butter, vanilla, cinnamon, nutmeg, and cardamom. I covered the dish and baked at 375 for 30 minutes.

When the porridge came out of the oven, I put it in my pretty dish and topped it with chopped strawberries, 1/2 cup yogurt + PB2 sauce, and my granola and trail mix blend. 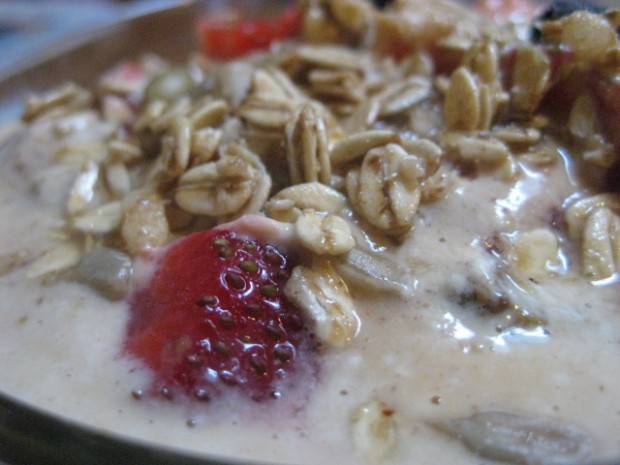 With my ever-present soymilky tea! 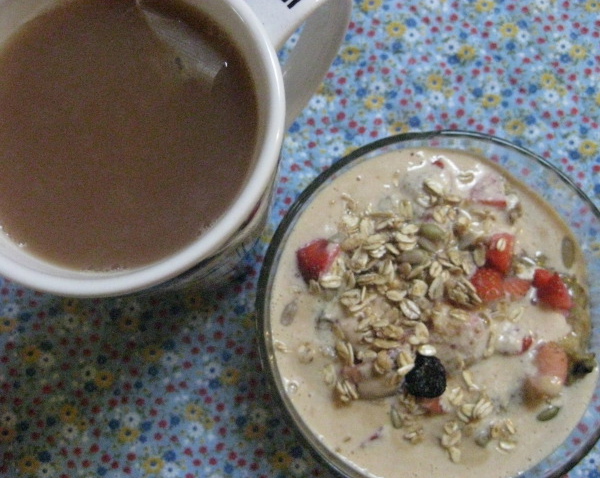 It also may be worth mentioning that I had about 1/4 cup of this porridge last night in the form of crockpot scrapings mixed with homemade chocolate mousse and graham crumbs …YUMMMMM: 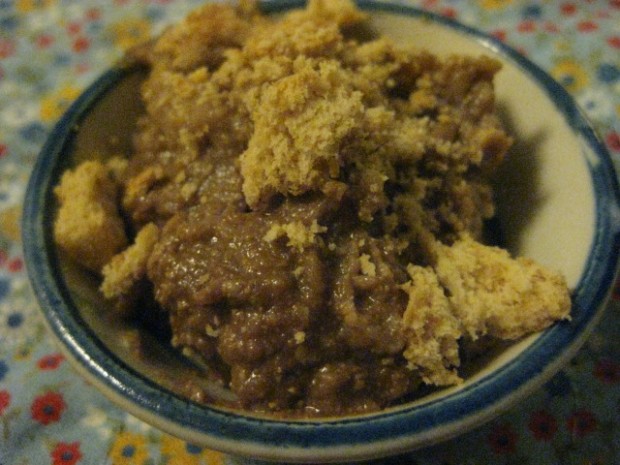 Now I’m hanging out with my ice pack, the Today Show, and some homework … and waiting for my doctor to call me back, which hopefully happens sooner rather than later.

Who are you waiting to hear from today?

14 thoughts on “Goldilocks (or Rosylocks?)”