As promised, the rest of the recycled balls came into play this morning for breakfast. 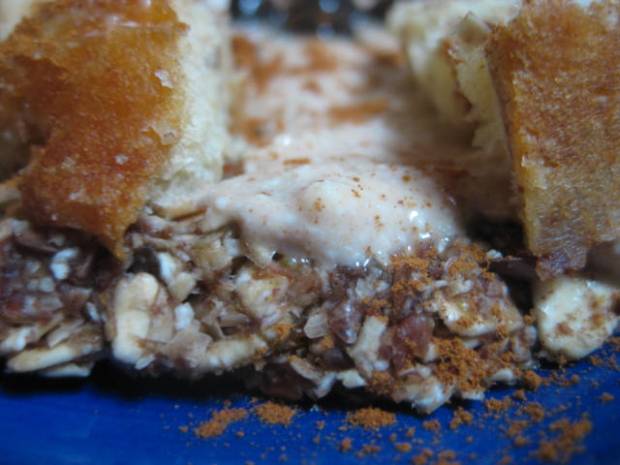 I frosted the cookie with 1/3 cup PB2 healthy cream cheese icing and topped it with 1/4 of Sunday’s Holiday Inn cinnamon bun: 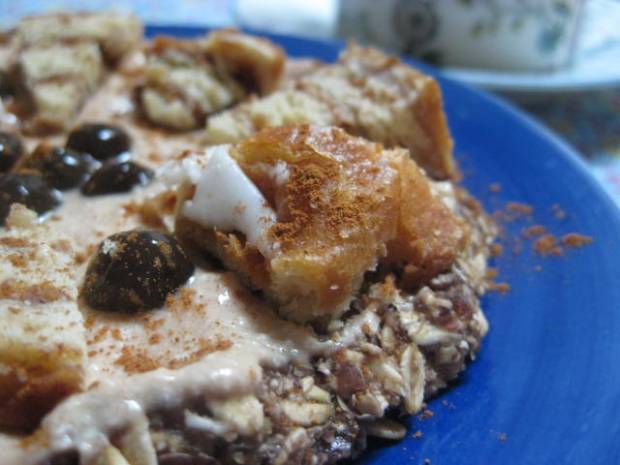 And, of course, the remaining balls: 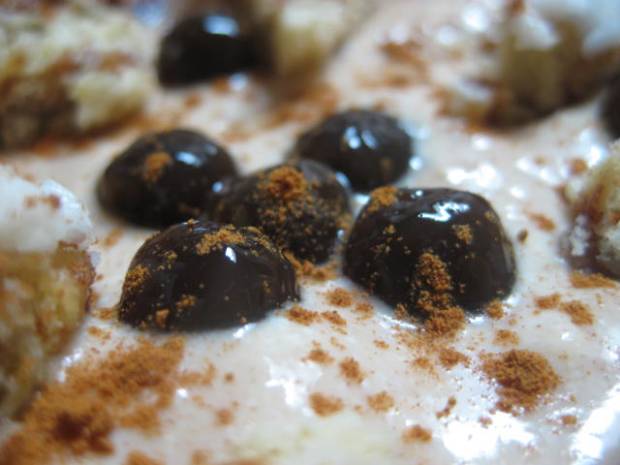 I brought my cookie to the couch to eat it with the almond sunse/black tea, the white peony iced tea, and The Today Show. I forgot about the apples up on the table and then realized I wasn’t actually hungry for them. They went back in the fridge for tomorrow.

I had to be up at Hunter at 9 again this week for a workshop on government benefits. I thought I was being so clever bringing my laptop up there so I could blog at the same time … but the wireless was blocked in that room!!! The nerve. They actually want us to pay attention. Hmph.

During the workshop, I ate an orange. If you’re not sure what an orange looks like, I ate one on Tuesday, so you can feel free to backtrack if you need the visual reinforcement.

For lunch, I had the last half cup of Thai seafood coconut curry/grilled veggies from Hunter’s lobby mixed with the half cup of chicken noodle soup that also came my way Monday night at Hunter, courtesy of Emily:

The exact same yogurt/ricotta with flax, Pb2, and banana that I had yesterday followed the soup.

Speaking of samples, I received a package from the more agreeable Just Tomatoes today. They sent me a variety of their products to try, the most exciting being pineapple powder … which seems like PB2 in pineapple form but better than PB2 because it’s pineapple and it has absolutely nothing added. I can’t wait to try it out. Pineapple cream cheese icing, anyone? Ohhhhhh, that would be SO good on carrot cake. But I’m getting carried away.

I opened up the mixed fruit munchies packet and used half for tomorrow’s yogurt (I’m excited to see how the freeze-dried fruit absorbs the moisture from the yogurt overnight) and half for an afternoon snack with a splash of soymilk:

Mmmm, so good. Especially the pineapple flavor that completely pops. I had a few dry, too — also delicious!

Once I recovered from the freeze-dried fruit lovefest, I headed out to the gym. Thursday is usually my outdoor running day, but running has been causing me too much pain lately and I opted for the gym machines instead (this made me sad because the weather was perfect for running). I did 30 minutes on the Stepmill, 15 minutes on the rower, and 15 minutes on the elliptical plus a bit of abs and stretching. I walked to and from the gym and did not jog because, again, jogging hurts! Stats: 1 hour and 40 minutes, 517 calories, 118 average heart rate, 162 max.

On the way home, I stopped into Union Market for samples of marinated mushrooms, Piave cheese, and these two little desserty treats:

That chocolate chip brownie piece was crunchy on the outside and soft on the inside. And sooo chocolate-y:

I was hoping the green thing would be marzipan-related, but it was just lime cheesecake. Still, I enjoyed every morsel.

What’s the most surprising cheesecake flavor you’ve ever encountered? Did you eat it?

22 thoughts on “Why is that thing green?”