Actually, I ate more than that because I just uploaded 42 pictures, and many of them contained more than one food. I’m also sort of speechless because every single food was out-of-this-world phenomenal.

All of this deliciousness came my way tonight at the David Burke Townhouse, courtesy of a Foodbuzz event to celebrate one million posts.

Before I arrived at the restaurant, I had taken “townhouse” literally to mean that the party would be taking place in someone’s swanky uptown apartment. In fact, the party took place at this swanky uptown restaurant. With an egg theme (much like my life lately): 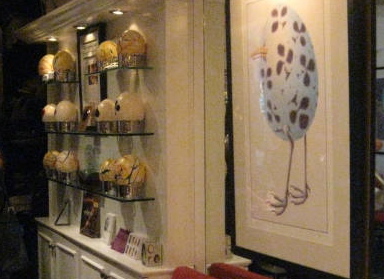 I ran into Ashley immediately upon arriving, and we contented ourselves at the bar with wasabi cracker sticks and thyme lychee martinis: 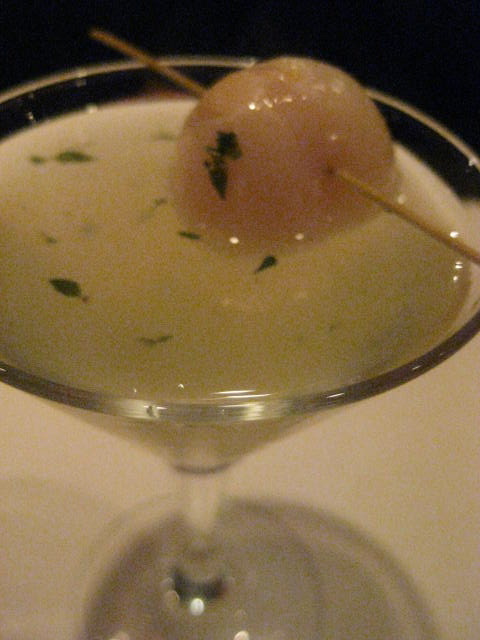 Those lychee martinis were teeny, so I had four of them. (Whoops.) I just get so excited about drinks that have real fruit! Plus, my first three did not contain any actual lychees. I had to go back for the fourth when I started to see the whole lychees floating around in other people’s drinks.

As soon as we got the go ahead, Emily and I beelined to the back of the restaurant where food was waiting. Remember, I’m still speechless, so I will let the photos do the talking. 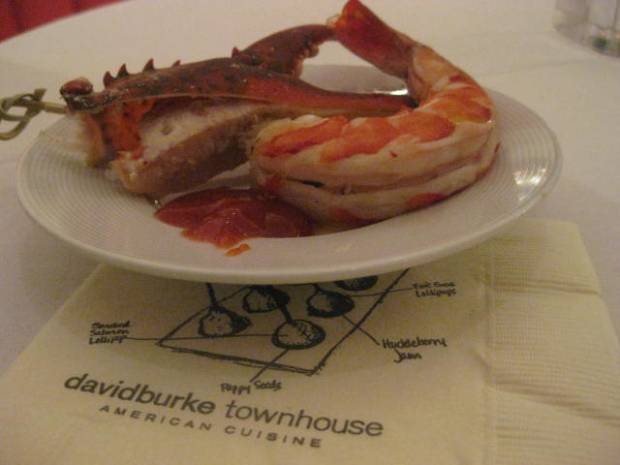 I had more than you see in that picture, of course. I couldn’t let the chance for fresh lobster and fresh crab to pass me by!

There were tons of sauces for the seafood, along the lines of wasabi crème fraîche, lavender crème fraîche, pineapple-truffle sauce, mango something, and more. I tried all the sauces on the side because I wanted to experience the flavors but I did not want them to mess with the perfection of straight lobster and crab 😛

Scallops in their shells with a ginger-scallion sauce:

My plate with two sushi rolls, a scallop, and a pile of picked ginger: 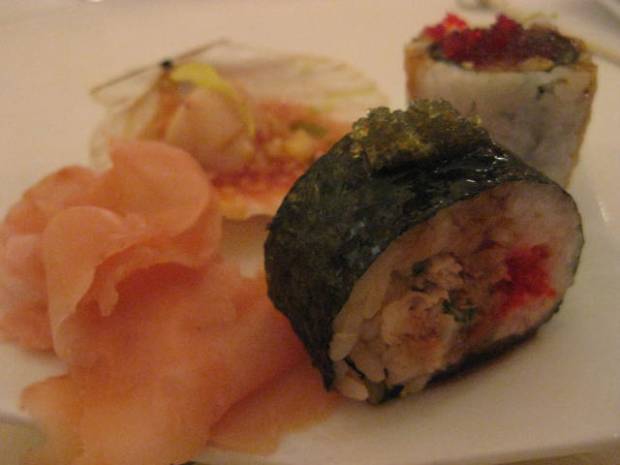 The carving station had salmon with horseradish sauce, turkey with gravy (I’m making that up because I can’t remember what sauce it really was), and short (?) ribs with red wine sauce. (I’m not a rib expert. Feel free to correct me if I have mis-identified.) 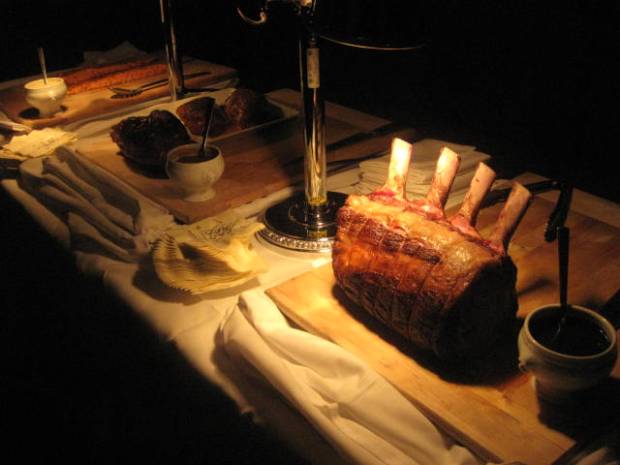 My plate with a little of everything:

I actually didn’t finish that plate. It was too meaty for me, and I like my salmon more done.

There were dumplings like this. Some had lobster, some had chicken, some had beef, and several had foie gras in addition to the other meats. I had at least one of each. 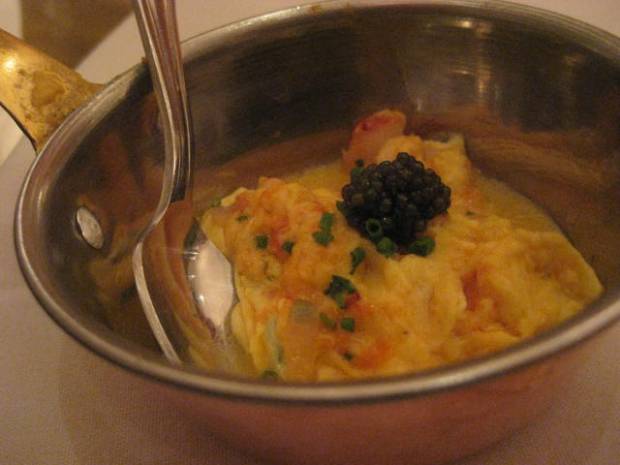 Enjoying eating straight out of the mini frying pan:

Pretzel-crusted crabcake with poppyseed honey and kumquat-jalapeno jam (YES, it was THAT amazing): 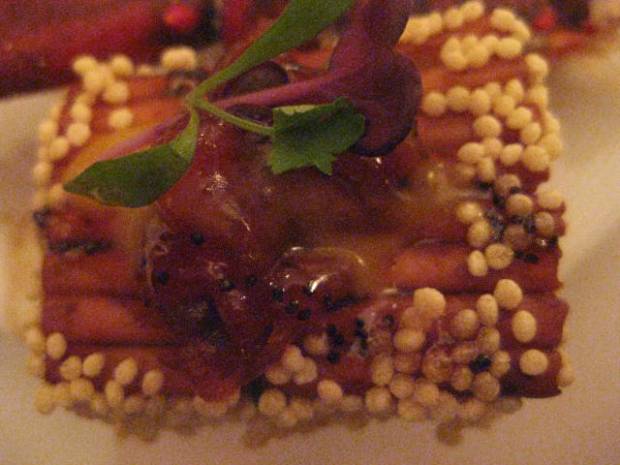 Lobster flan (served in an EGGSHELL): 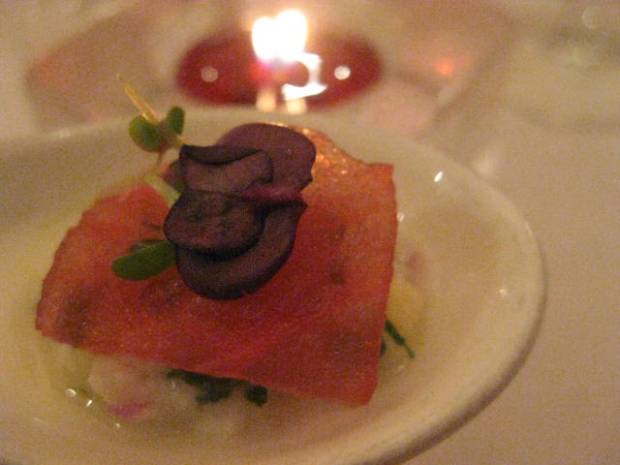 And then the desserts began to come around. I kept myself to “one of each,” but one of each became far more than I had anticipated as more and more desserts rolled out of the kitchen!

Pecan-cinnamon buns arranged on a mini-stove. There was actually a fire flickering inside the stove, but you can’t tell from this picture:

Apple fritters on a bed of brown sugar: 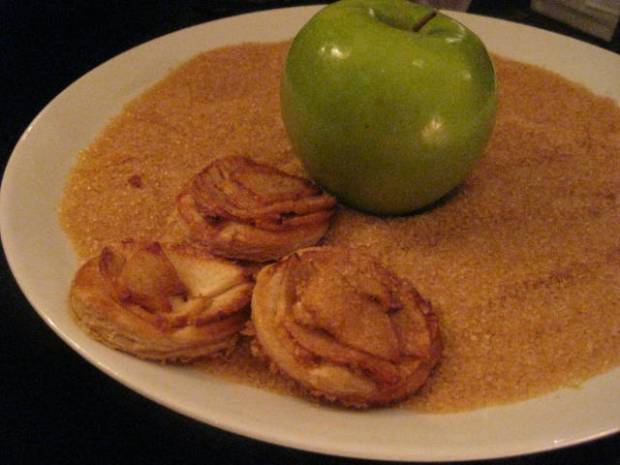 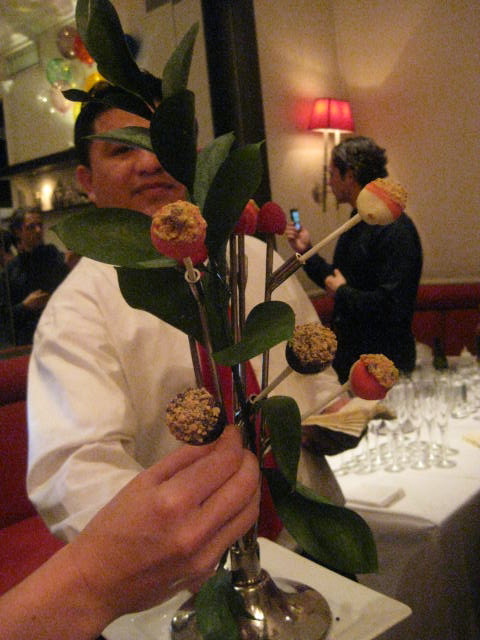 One of each (clearly the theme of the night): triple chocolate nut, strawberry pistachio, and chocolate with chocolate crunchies:

Dark chocolate cherry cupcake (literally the size of my thumb — I had two) and butterscotch pannacotta: 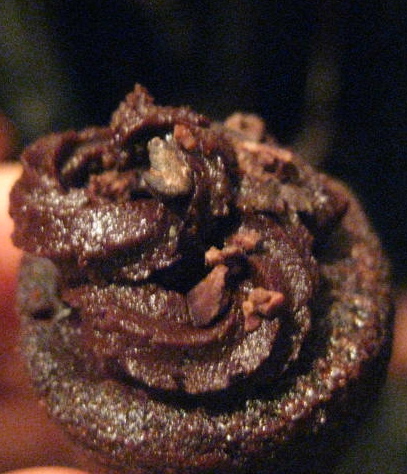 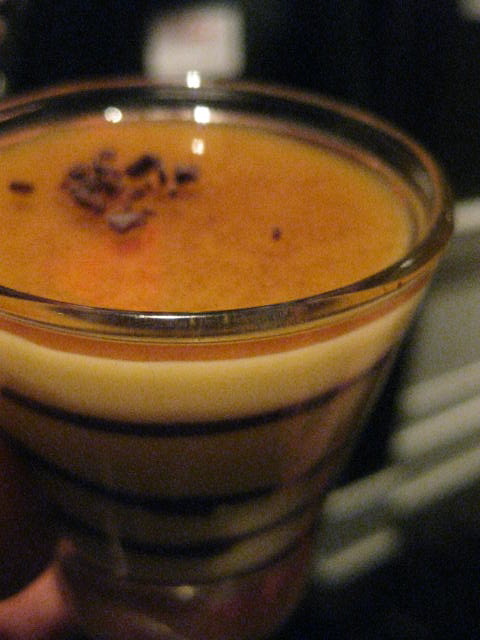 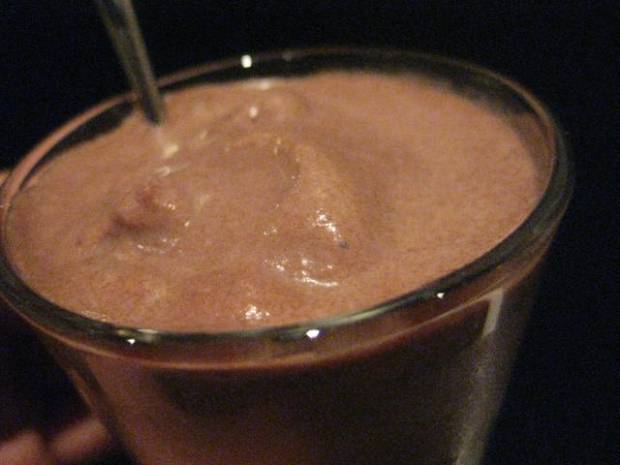 At around this time, I started to get overwhelmed by too many desserts and not enough hands. I found a narrow ledge and got a collection going:

(On the right is a chocolate rice crispy-cereal treat.)

A coconut cream puff and a warm custard-filled doughnut ball (the doughnut ball actually had a fancy Italian-ish name that I cannot remember): 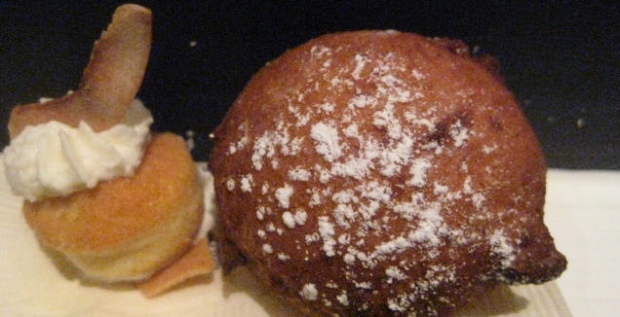 Malted milk and a grapefruit bar with crème fraîche: 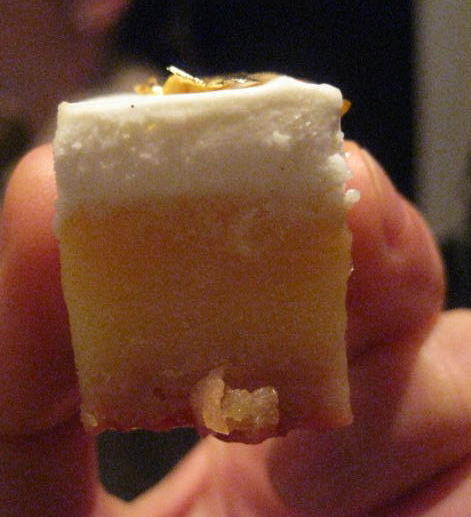 The malted milk had a very familiar flavor. Missy hit the nail on the head when she said it tasted like the milk leftover from a bowl of Fruit Loops. I only had a couple of sips because I can make that myself. I left the milk on the ledge and promptly knocked it over with my big bag about five seconds later. David Burke himself swooped in to clean up the mess.

The grapefruit bar, on the other hand, was insanely good (though Emily wasn’t a fan. I guess you really have to love grapefruit.) It had gold leaf on top:

And rather than a bowl of mints on the way out, the Townhouse had peanut brittle, of all things! The grab-in-action and my pieces: 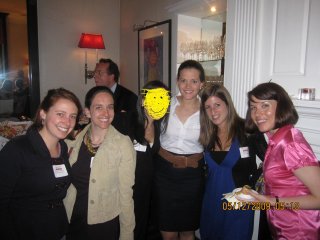 So, this was a scrumptious event that I got to share with several fun ladies who love food almost as much as I do! I hijacked this photo from Missy’s recap (which you should check because she has many more facts about the event and the restaurant): Me, Emily from Super Caloric Chalk Dust, Melanie from MelonCauliflower, Ashley from Healthy Happier Bear, Missy from Missy Maintains, and Diana from Soap and Chocolate.

I’m so glad that Foodbuzz decided to celebrate one million posts and invite me. I just wish they could have invited the starving population of NYC as well since there was more food than anyone there actually needed. I always feel torn at events like this — awed and thrilled that I got to attend, yet overwhelmed and distressed at the excess! The thought of trying to comandeer all these leftovers was too much to handle at this particular stress-pinnacle of the semester, but I hope they went somewhere useful. And I hope thinking about it doesn’t keep me up tonight!

What makes you feel torn?