As I was contemplating what to make for breakfast that would best use the extra things in my fridge before I leave for the weekend, I read Broccoli Hut‘s comment about healthy banana splits! Just like that, breakfast was born 🙂

My current batch of yogurt isn’t strained, so I needed something to thicken it up: chia pudding! Two packages from Oh!Nuts and Navitas Naturals came in quite handy. These have to be the jumbo-est Medjool dates I’ve ever seen:

I followed Kristen’s holiday chia pudding recipe, but I took out the “holiday” (cloves, ginger, lucuma) because I just wanted vanilla. Also, I halved everything except the chia seeds and added 1/2 cup of yogurt. I probably should have taken out the water completely and only used yogurt because it didn’t get as thick as I wanted, but oh well! For today, I just popped it all in the freezer for a bit to get some firmness.

I split the 1/2 banana I had left and decorated it with my three flavors and some extras: 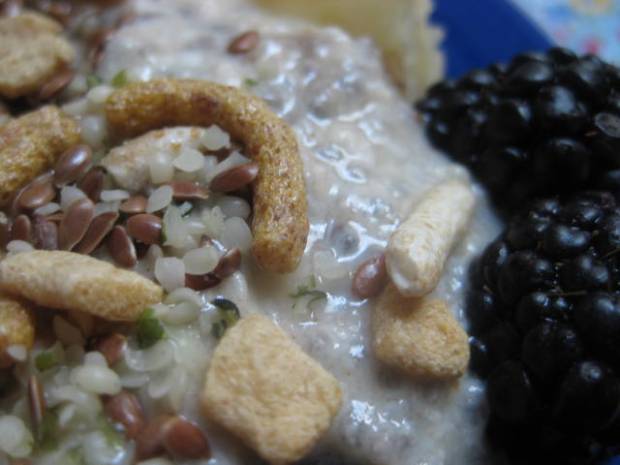 Topped with flax seeds, hemp seeds (some seem to have sprouted, hence the green), and cereal (and sided with yerba mate): 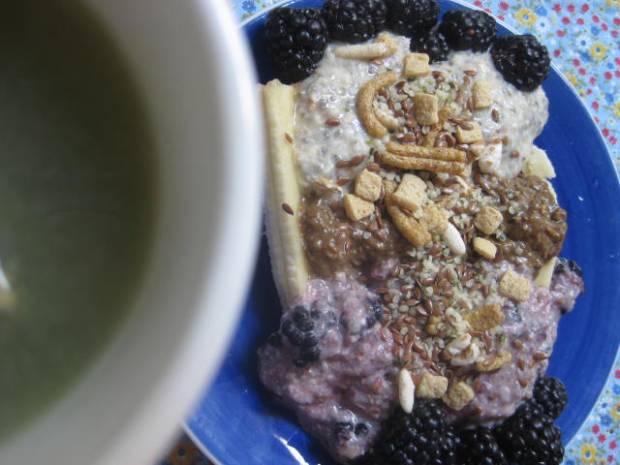 Right after breakfast, I’m off to my last class (where I think a last class celebration will be taking place) and, from there, on a bus to Providence. I wonder if Peter Pan will have Internet on the bus again?

What are your three ideal split scoop flavors?

Also, HAPPY BIRTHDAY to my brother Mark!!!!! Yay for May birthdays 😀