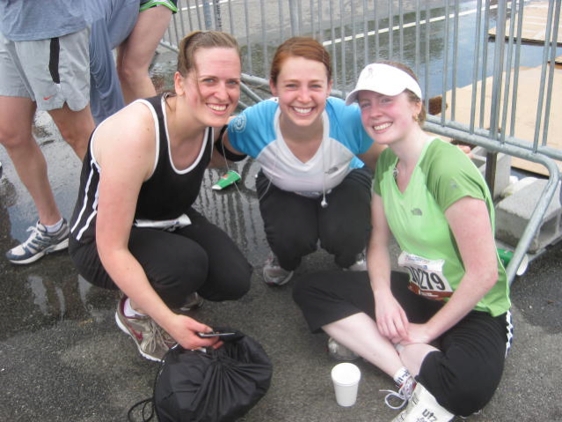 I DID!!!!! I ran the ENTIRE thing … no stopping except for gatorade at every fluid station.

I know, I know. You’re thinking, she ran it all after going on and on about all her drama? But it’s true! Somewhere near the beginning, I started to think about how cool it would be if I ran the whole thing, and then I suddenly couldn’t bear the thought of stopping to walk! Here’s a brief(ish) recap of how it all went down:

Erin Gunn, Kate, and I took ourselves all the way to the back of the looooooooong starting line. I ran into Ashley (who I find EVERYWHERE), but we quickly said our goodbyes so that she could jump into her faster-paced group. My partners-in-crime and I spent nearly 20 minutes waiting for our group to get up to the start line — this race was seriously so packed! — and making snarky comments about how we were certifiable to be doing this. When we finally got up to the front, I suddenly decided that I needed to go to the bathroom and ran for the port-a-potties as the girls took off. They thought I was crazy, but I was not about to be dreaming of potties for the next 13.1 miles! I finally got back to the start line and set out all by myself. To be honest, though, I was glad to be alone because I didn’t want to feel tempted to go faster than I should.

I was shocked when I got to Mile 1 and saw on my HRM that I did it in 11.5 minutes. I’ve been running 15-minute miles (when I’ve allowed myself to run) since the “incident” over two months ago. I decided I needed to slow down to be safe. So I did.

I got really annoyed when I hadn’t quite hit mile marker 2 and all the people running in the lane to my right were on their second lap and already on mile 6. I thought about how they were almost done and I was not. Mile 2 took me 12 minutes, and I was pleased. 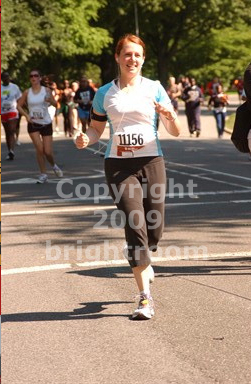 Somewhere between Mile 2 and Mile 3, I sensed a lot of commotion immediately to my left. I was so focused on running straight ahead that I barely noticed it, but something made me glance back after I had passed. It was Mike (Erin’s fiancee) and D-Lo cheering wildly for me! And I had completely blown by them without even acknowledging it! I gave a little side wave, but the baffled looks on their faces when I glanced back kept me giggling for another mile.

I finished Mile 3 in 11 minutes and made myself slow down again. Mile 4 was 13 minutes, and I didn’t need to make myself slow down anymore because I was running as fast as I could! In Mile 5, my hamstring, groin, and glutes (and other new muscles!) started to feel really tight and slightly more stressed. I got a little worried, but the pain was pretty consistent and just felt like tiredness rather than worsening injuries — plus, I had already decided I would run the whole thing — so I kept plugging away. There were a few more 13-minute miles after that. There were also a couple passes by the park entrance that is right near my apartment. I kept thinking, I have been running for so long, yet I have gone nowhere!

I finally exited the park just before completing Mile 7, and I was thrilled!

As pretty as the park is, I know it like the back of my hand, so it tends to get monotonous. Once I hit the street pavement, everything was new to me. I was still running 12/13-minute miles consistently. There were other exciting things about hitting mile 7: (1) I knew that this was the longest I had run continuously since getting injured and (2) I was over halfway done!

From there, I was in the zone. The songs that Olivia had put onto the running mix for Kate and me were perfect. I couldn’t even tell you what they were, but they were steady and just fast enough to keep me moving but subtle enough to fade into the background.

I ran into Erin Gunn just after finishing
Mile 10. Her hip flexor troubles were flaring up, so she’d had to stop to walk and stretch a few times. We jogged together for a couple minutes until she needed another break and pulled to the side again. Taylor Swift (my own playlist addition) and Kanye (Olivia’s addition) carried me along through the rest of Mile 11. I was psyched at this point because I knew that every step past 10.5 was a PDR (personal distance record … because I’m down with the racing lingo). Obviously, there was no way I’d start walking at this point!

Erin Gunn and I traded places a couple more times over the next mile, but by the time we hit the marker for Mile 12, she was well ahead of me again and stayed that way for the rest of the race (yayyyyyyy, Erin!!!!).

Also upon completing Mile 12, the breeze from the OCEAN kicked in. Smelling that salty air and knowing that the finish line was all mine after only one more mile was the best motivation ever! 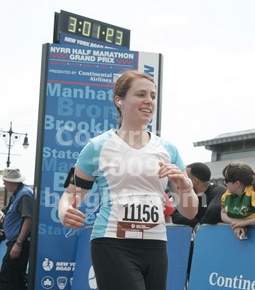 The best part was the last leg of Mile 13 along the boardwalk with the OCEAN right beside me! I was in heaven — the perfect breeze, the perfect smell, the perfect view, and the finish line in sight!

HRM also told me that I had burned over 1600 calories — YIKES!!!! Get this girl some food! 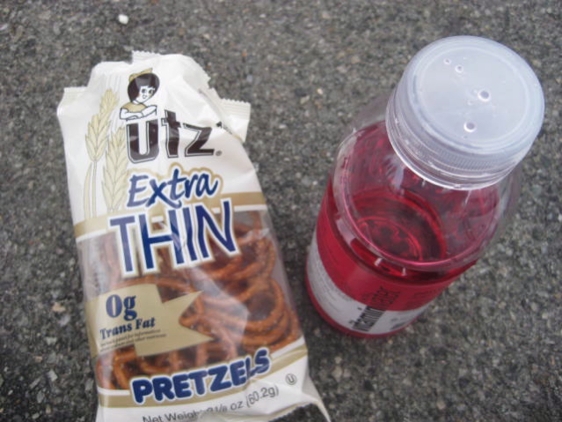 I located Erin and Kate … and Mike and D-Lo, our vitamin-water-bearing heroes:

Erin Gunn said she never wanted to stand again, so we took our pictures on the ground: 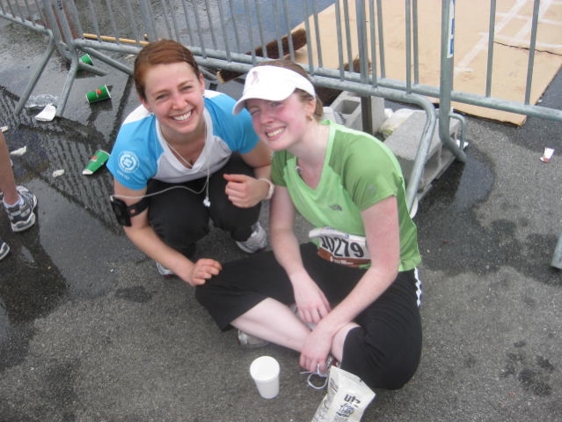 The boys led us to the car and dropped Kate and me off at my place after many many many minutes of traffic jamming. That’s right! No subway for me on half-marathon day 😀 Thanks, Mike! AND CONGRATULATIONS TO ERIN GUNN AND KATE!!! (and to all my bloggy ladies who ran the half today … especially to Heather who has been such an excellent support throughout the training!)

And now that I have that out of my system, let’s check out some race fuel, shall we?!

I obviously started my morning with the most perfect race fuel ever: an overnight breakfast cookie, a la Fitnessista. 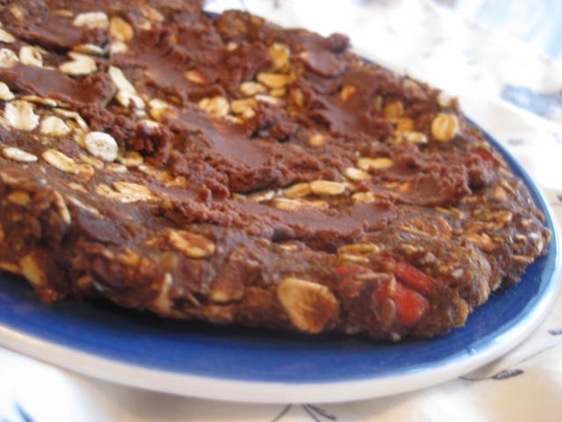 This morning, I spread the cookie with cacao bliss (what else?!) and enjoyed every bite immensely.

You already saw lunch #1, which came in the form of pretzels and vitamin water after the race (and probably close to a gallon of lemon-lime gatorade over the course of the race). I didn’t get hungry again until about 2:30, so I oven-ed up the rest of of my sardine-feta pizza (don’t hate — it really was soooooooo delicious). 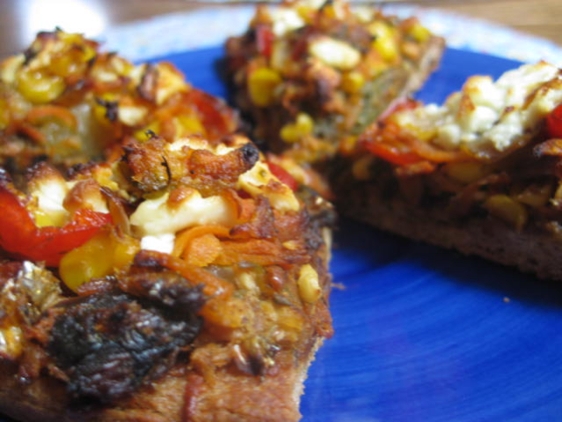 After a bit of pizza digestion, I moved on to bigger and better things: baked yam with a giant pile of cacao bliss and a sprinkle of unsweetened coconut. 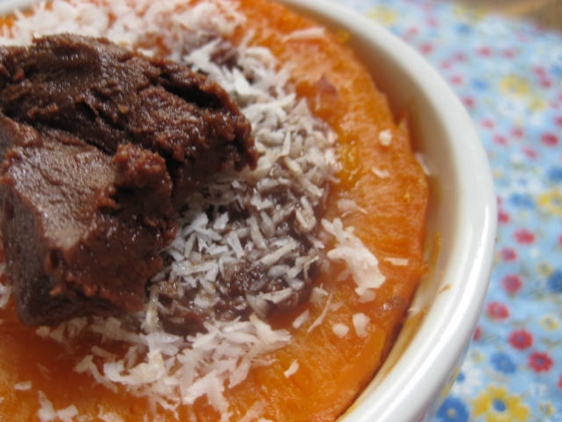 (There’s actually a ton of cacao bliss hiding under there, too. The coconut covered it up, and I certainly couldn’t have that so … I added more bliss to the top :-D)

And let’s not forget about the silent partner in this whole process:

And THEN, Paige came over to see about the tent … and she liked it and I liked her, so yayyyyy new roommate!!! (as of July 1) And yay for the blog providing an excellent forum for roommate-hunting! 😀

Ahhhh, the half marathon is DONE and I DID IT!!!! I can’t believe I lived to tell the tale. (And no, I never have to run a half again!)

Do you prefer running for races or running recreationally? (or not running at all?)