So, I got home from class at 10:30 on Tuesday night (my bedtime is 9pm, mind you) and decided it would be super smart (sarcasm) to embark on a kitchen project right then. I raided my stores of shelf-stable items and came up with the following. Can you guess where this is headed?

Motivation for the insanity? Lucia’s surprise potluck baby shower was scheduled at my office for 3pm on Wednesday, and I had signed up to bring cookies. (Yes, we had another baby shower! ‘Tis the season …) I could have just grabbed a package of cookies and called it a night, but that would have been too easy. Instead, I tried to come up with delicious items I had hanging around my apartment that I certainly did not need to be eating all by myself. The project evolved as I worked, but I started with a package of Newman’s Own Organics honey wheat pretzels (and I sooo nibbled my share during prep because I am powerless when it comes to salty-sweet!), Peeps, and this bar of Russian chocolate from Olga: 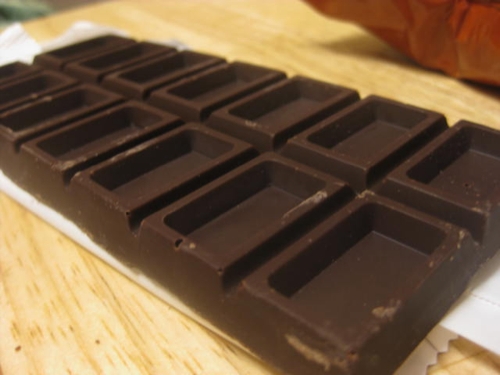 I added a dash of soymilk to the chocolate to aid in dipability but, aside from that, I did not doctor my dippers whatsoever.

I placed the pretzels on parchment paper and let them relax in the fridge overnight. In the morning, the Peep pretzels were still impossibly sticky, so I had this brilliant idea to mix them in a bowl with the rest of the pretzel pieces and a bag of Skittles to minimize stickyness. 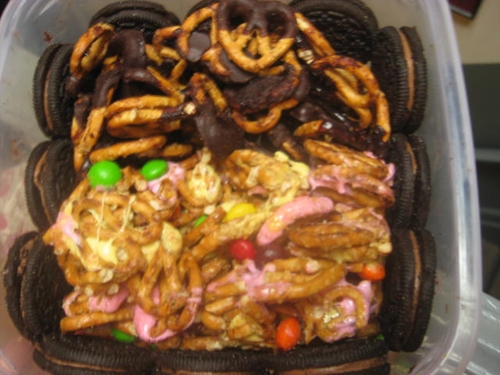 I kept brainstorming throughout the whole subway ride to work (a lot of brainstorming since my commute is an hour and 15 minutes) and started to think about plan #3: turning the glob into pretzel bars. When I got to work, I went to the kitchen and used the bottom of a glass to smush everything down as aggressively as I could. I cut the contents of the tupperware into squares and put it in the fridge in the hopes that it would firm up.

Just before the shower, I went to check progress. The marshmallow pretzel-pieces stuck together pretty well, but the chocolate covered pretzel pieces and cookies were a crumbly mess. At that last-minute, make-or-break moment, plan #4 came into being: pretzel salad. 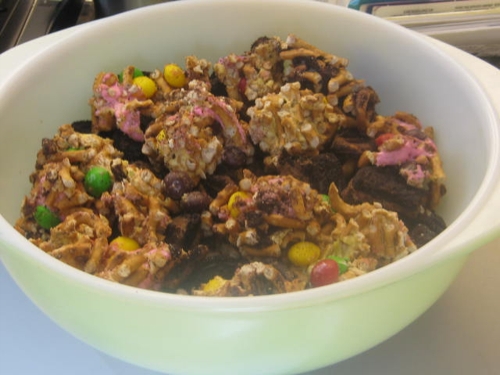 I poured the crumbly chocolate cookie and pretzel mess into the bottom of a bowl and broke the pretzel-marshmallow-skittle globs into smaller clumps to use as a colorful garnish:

I threw a spoon in the bowl and my “salad” joined the impressive line-up. 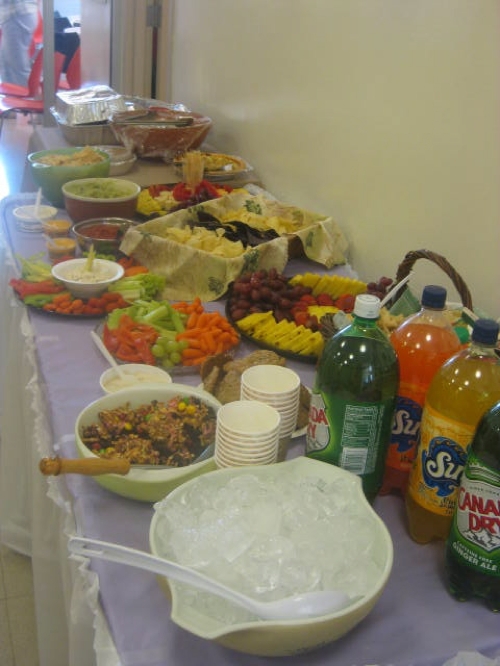 Also on the crunch-time snack-preparation brigade were Inginia and Danilda, who were hard at work in the kitchen on some serious guacamole (because guacamole is critical!) right up until the very last second: 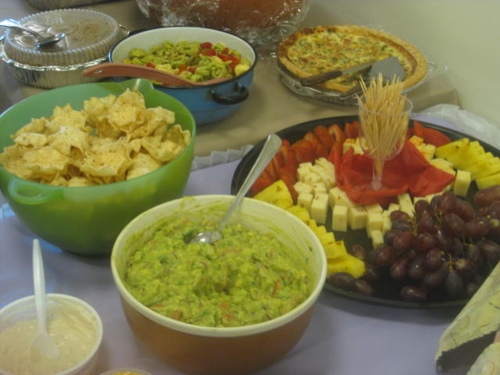 Plus more! Before we could eat the food, however, we had to surprise Lucia!

(And I think she was actually surprised! As Pura was leading her into the room, Lucia asked, “Whose party are you taking me to?”) 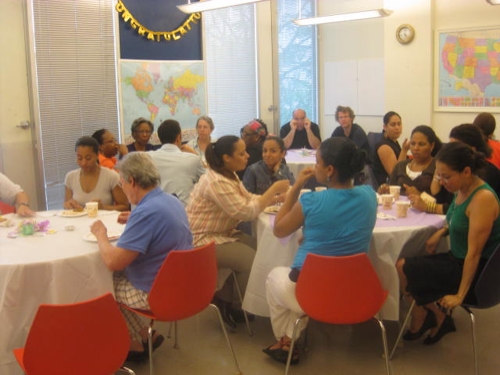 And plate #2 with more salad, some rice, pineapple, and more ambrosia topped with pretzel salad: 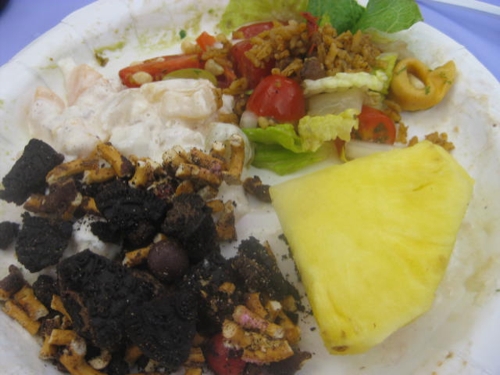 (I may have also had thirds and fourths of ambrosia …)

Inevitably, my favorite time of day rolled around: cake time! How adorable is the cake decor?

This cake was actually made by one of the women who volunteers for our agency, and it’s a Dominican-style pound cake with guava-berry filling and sugar-and-egg white frosting (that tasted exactly like a marshmallow). 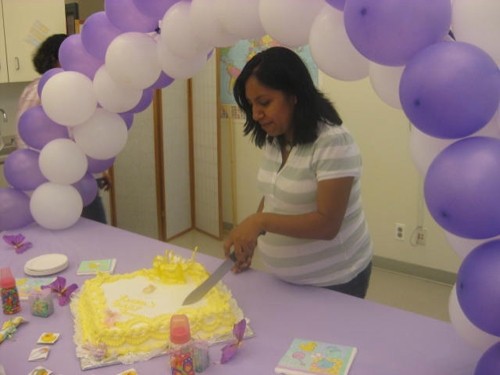 And my mountain of a piece:

Phew, nothing like a 3:30 dinner to get you excited for the last hour of the work day! I was so stuffed after all of this that I couldn’t even contemplate going to my hot yoga class even though I had packed and lugged all of my yoga gear with me that morning. My belly was sticking out so far at that point that I wasn’t even sure I had it in me to touch my toes! Plus, I had a weird sore throat/congestion thing going on all day and thought I might be better served by sufficient sleep and prep for my looooooooooong Thursday. I think I might need to start finding a way to eat just for the moment and not for the rest of the week every time I see food …

OK, two questions: (1) Craziest thing you’ve seen that was labeled as “salad”? and (2) Best cake decorations you’ve ever encountered personally (as in, not by watching Ace of Cakes on Food Network!)?

26 thoughts on “Featured moment of expansion”