Yup, I’m fully blogging in bed right now — in my pjs, under the covers, teeth brushed, mouth guard in place, contacts out, glasses on, earplugs in, and ready to pass out as soon as I hit publish. Can’t wait 😀

But let’s do a little review of the day first, shall we? I walked into the office at 9:20, and the first thing Belkis said was, “Sarah, there’s bread in there.” [Gestures to conference room right next to my desk.] And bread there was! 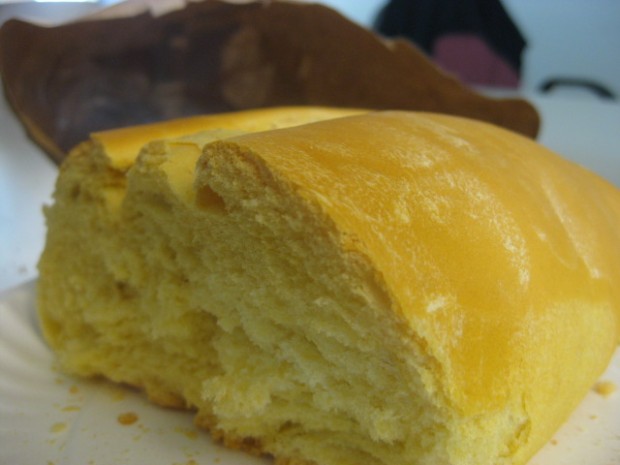 Belkis had brought in a whole loaf of bakery-fresh Dominican bread. The thought of saying no never crossed my mind. I cut off a big slab, about an inch thick, and dipped it in my milky earl grey tea. I think that might be a little weird. I dunk everything — cookies, crackers, bread. How do you feel about soggy carbs?

After my big slab o’ bread, I went back for the end pieces:

I’m not crazy about the heels of regular sandwich loaves, but they’re always my favorite part of any kind of fresh bread or baked good … brownies from the edge of the pan, yum!

After that loaf-fest, I didn’t really get hungry again until about 2pm! As an appetizer, I had two of these little balls that Inginia (of the pumpkin kibbi fame) brought in. She slaved away all weekend making them for a party and wanted to share the wealth:

This is also from some Middle-Eastern dish, and I’m not sure of the exact ingredients. I think Inginia is going to bring me the recipe, but in the meantime, they were basically fried bulgur dumplings with some ground meat and seasonings inside: 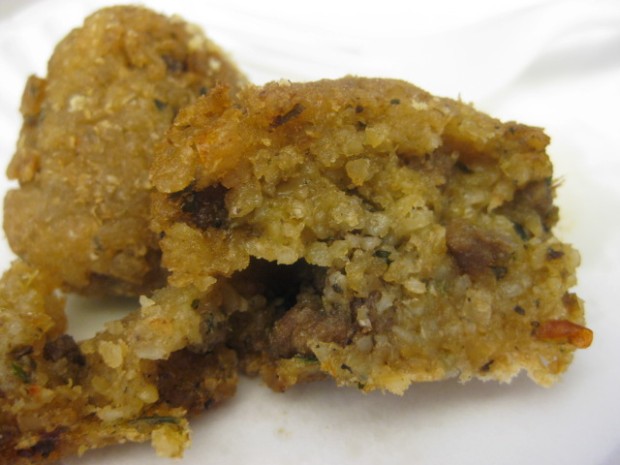 Very tasty! Once I get the recipe, I’ll see how I can go about healthifying them — I think they’d also be delicious baked.

Lunch was a cup of spinach-chickpea dal:

And a one-cup mix with 1/2 yogurt and 1/2 pumpkin gingerbread crockpot oats: 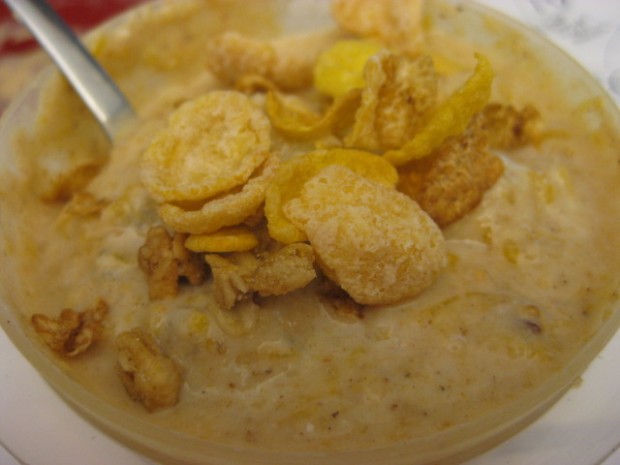 (I sprinkled some of Jessica’s Honey Bunches of Oats on top for visual variety.)

Around 3:00 I had my packed cup of fresh pineapple (same deal with the cereal):

And then I heard some paper rustling suspiciously. I followed the sound with my eyes and saw this:

That’s Nydia and Jose bent in deep contemplation over a pile of Valentine’s chocolate!

I took one of the pink hearts for later 😀

And the guacamole necessitated a mint (my first of the day!):

I went into a session a little after 4, and when I got back to my desk after, this sight greeted me:

Yes, two potatoes mysteriously showed up on my desk. Apparently, I am now the designated recipient for anonymous food drops (but I’m not complaining!). Potato donor, reveal yourself!! Even though potatoes are the one food that I seriously dislike (this rule does not apply to sweet potatoes, obvi), I am clearly the best person to take on the task of finding them a new home. At this moment, I imagine the potatoes are journeying into the depths of Brooklyn with Gina … and I have full confidence in Gina’s ability to use them appropriately!

Because I was planning on running club at 6:30, I decided to have an early 5pm dinner at work. Especially since the club no longer gives free food after (grrrrrr!), I have found that this dinner-first arrangement works well (at least it has worked well all two times that I’ve done it, haha) to keep me energized through the run and not wanting to gnaw my arm off after. The dinner I packed for tonight was 1/3 wheat bagel with 1/4 cup pumpkin-pb spread (1 T peanut butter, 3 T pumpkin) and two black bean-salmon patties: 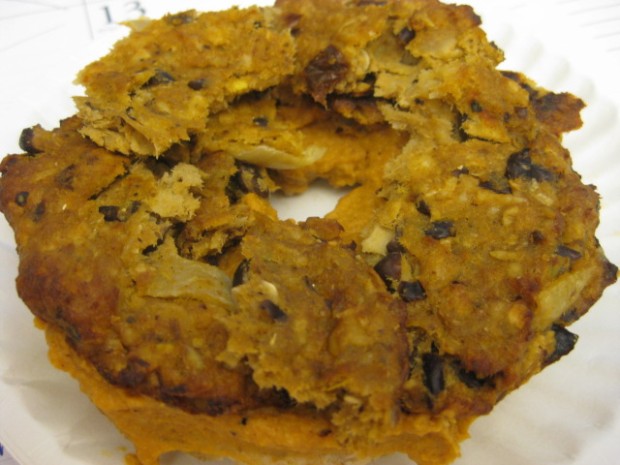 I toasted the whole thing in the work toaster oven, and it was so delicious and saucy, mmm:

Dessert was a given: the Dove chocolate heart from Nydia: 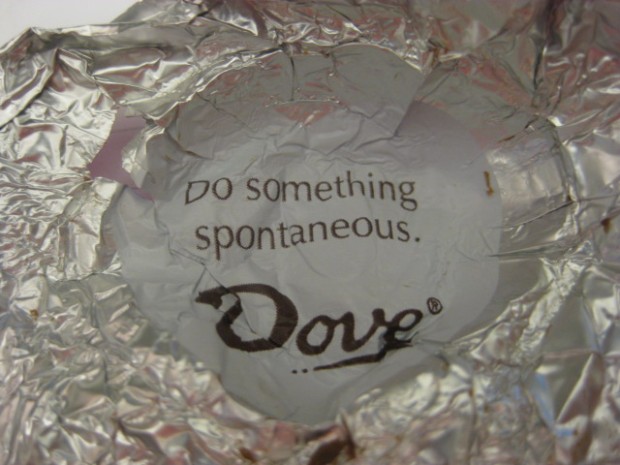 I followed that advice and had another mint as I walked out the door :P.

Gina, Kate, and I met at 6:30 for running club and did 4 sort of stop-and-go miles in Central Park, including a loop around the reservoir, one of the most beautiful places to run in the city at night! But Kate and I were talking after about how these running club runs just seem to drag for ages. We ran over 9 miles on Saturday with minimal struggling, but 4 miles at running club always does us in! I wonder if it has to do with the time of day …. Anyway, stats for the run: 49 minutes, 357 calories, average heart rate 140, max 156.

In the subway station post-run, I broke out the breadstick and marinara sauce that Jessica and Nydia brought back for me from Pizza Hut because they couldn’t finish it at lunch. Kate, Gina, and I split the bounty between the three of us after Kate and Gina hand-modeled the goods for me:

I had my final snack of the night when I got home: 1/4 of a broiled banana (the banana also came from Belkis today) topped with 1/4 cup chocolate mousse and a tbsp toasted pumpkin seeds:

While I was washing dishes and before I was able to drag my mouth to the toothbrush, I may have also peeled off one whipped cream-soaked cookie from Brigitte’s remaining log of birthday cake and eaten one or two pieces of Lindt hazelnut chocolate …

News of the Day:

1. Heather, the queen of raw chocolate-avocado mousse herself, is definitely NOT giving away anything you’d want to try to win here.

2. Neither is Itzy here.

3. There’s a new BSI contest this week, and it’s a good one! Get more info here.

4. I was reading the January issue of Self while I was on the elliptical this morning, and I found a little blurb in there about the dangers of resting your laptop computer directly on your lap — I think it mentioned causing irritation to your thighs and emitting radiation that can lead to cancer (like everything does) and suggested using some sort of lap tray between your legs and the computer. (As I type this, of course, my laptop is directly on my lap.) Does this worry you? Where do you rest your laptop? Do you put something between your legs and the computer?

5. And remember the most important question of all: How do you feel about soggy carbs?