My second PB2 experiment took place this morning when I decided on the world’s best oatmeal combo: pb-chocolate-banana. 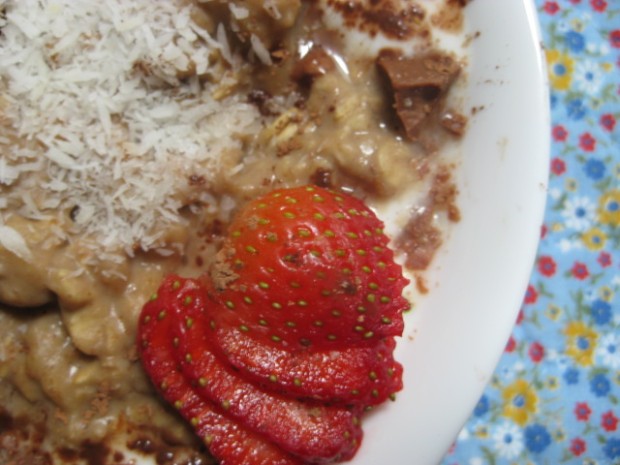 Yum! But, I couldn’t really taste the pb2 chocolate and peanut flavors that strongly. If I were to make this bowl of oatmeal again, and I probably will, I would mix cocoa powder into the pot to cook with the oatmeal and save the pb2 to pour on top. Mixing it in led to too much flavor dilution!

For lunch, I had the grilled chicken/chicken parm leftovers salad that I brought home from my coworkers on Friday. I actually only used half of the chicken that was on the salad and saved the other half for tomorrow. I bulked up the salad with the grape tomatoes, radishes, chopped endives, and cheese cubes from Friday night and topped it with a drizzle of Annie’s lite gingerly dressing I found in our fridge + freshly ground black pepper.

Post-picture, I decided I needed more crunch and added two chopped and toasted almonds to the top 😀

My eyes were bigger than my stomach (as my dad would say), and I made a second course that consisted of the rest of the chicken parm toast with homemade almond-cashew butter + the last cup of Friday night’s leftover fruit salad and a sprinkling of vanilla-almond granola. 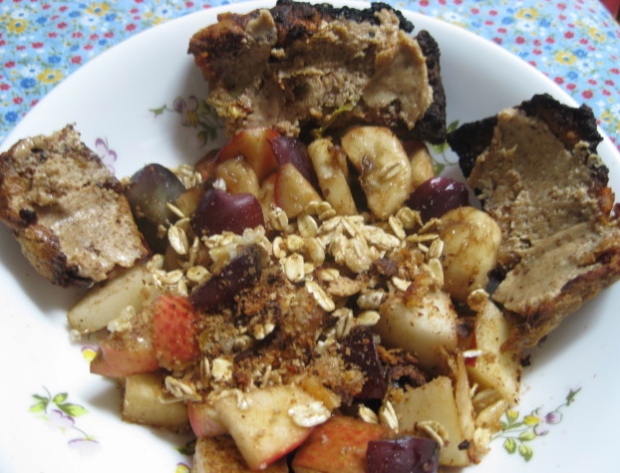 I ate the toasts and realized I felt full, so I held off on the fruit salad for another hour or so until I was ready.

Here’s another picture, just because I’m not looking forward to going back to my paper as soon as this post is done. 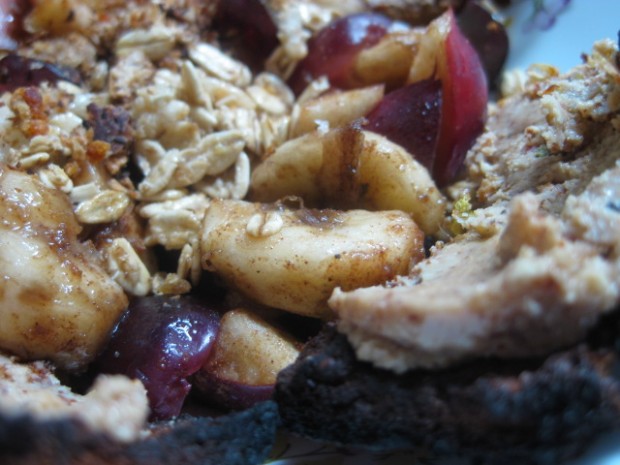 I’m leaving in a little while to meet the comm girls for coffee in honor of Diana’s recent ENGAGEMENT :D, and then it will be back home and to the books!

In unrelated news, I went to do my laundry this morning only to find the big metal gate down and the laundromat dark and empty. I spotted the manager parked a few cars down and went to inquire. Apparently, the metal gate was broken and he couldn’t get in! He told me to leave my clothes with him and come back tonight to get them. I was caught off guard, so between that and the language barrier, I got flustered and agreed. But now I’m thinking: (1) Is he going to wash my stuff for me and then charge me by the pound (which will undoubtedly cost more than I normally pay to do it myself)?; (2) Are all my clothes going to shrink because he doesn’t know what can go in the dryer and what can’t?; and (3) Was I completely off-base, and did he just mean he would hold onto my laundry until later so I didn’t have to drag it all the way back home, and I’ll still need to do it myself tonight?

Yes, I could just go back over there and check, but I’m feeling lazy and the suspense is more fun. What do YOU think will become of my laundry?