I kind of wish today were St. Patrick’s day again because I was really on a roll with the greens!! Just as soon as I got past the non-greenness of my 10am snack …

The identical twin of Wednesday’s yogurt:

A little past noon, we all settled in for lunch. My coworkers had ordered pizza, so I ate what I packed 😀 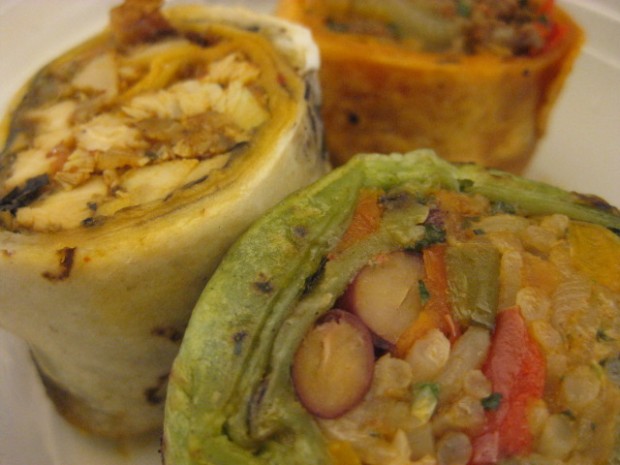 (There were actually two pieces of that white one, but the first piece flew into my mouth too fast for the camera!)

And a giant salad filled to the brim with goodies:

This is a 4-cup container packed with spinach, asparagus,
radishes, grated carrot, strawberries (finally tried strawberries in a salad — yum!), goat cheese, and about 1/3 cup of mixed-grain salad. I dressed it with balsamic vinegar, truffle oil, coarse sea salt, and black pepper.

It was such an exciting salad to eat — the nuts and dried fruit from the grain salad added perfect chew and brilliantly complemented the sweetness of the strawberries! Nothing like surprise food donations to perk up the standard lunch fare 🙂

A closer look at the inside:

After lunch, Mildred and I went down to check in on the bi-weekly brown bag staff lunch. Today’s theme was “words of wisdom,” and I pulled a really good one out of the basket of words … but I left it at work, hmph! While at the lunch, I nibbled on 1/4 of a cinnamon muffin: 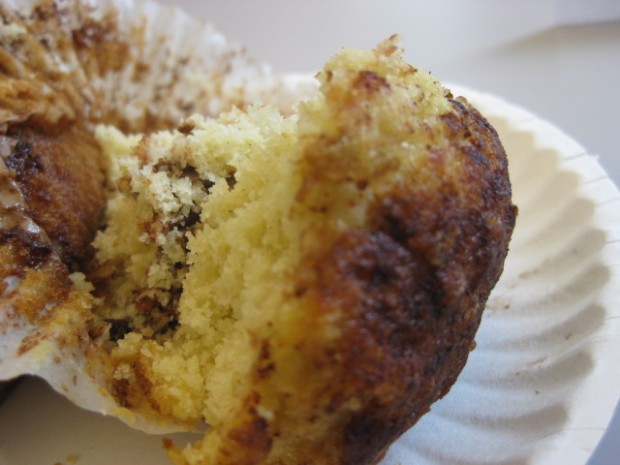 And half of a zucchini muffin: 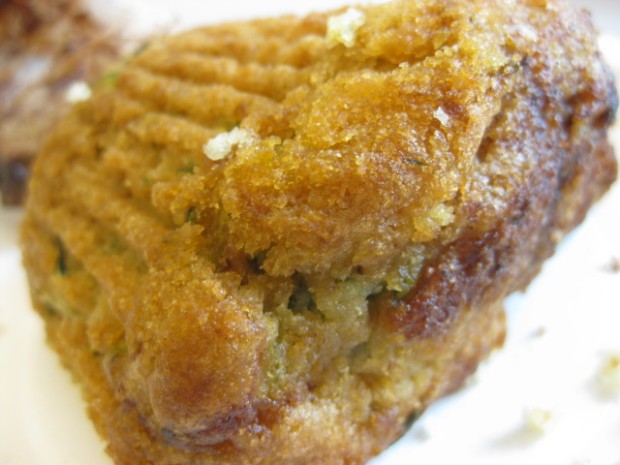 And there was a bit more fancy candy action. 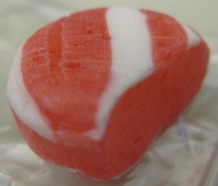 Afternoon snack around 3pm was the very end of the asparagus guacamole (still as green as the day it was born!) and riceworks:

At 4:30, Nydia broke out an array of fresh and fruity produce! I had about three times the amount of grapes and strawberries pictured:

After work, I headed downtown to meet two of my old coworkers from the SCORE! days for dinner. (Sidenote: SCORE! (and not Scores) is where I worked as a director for the three years between undergrad and grad, the savings from which are now paying my living expenses … until they run out in May!)

Anyway, Karimah and Deana both happen to be pregnant right now and due within three weeks of each other late this summer! As a semi-professional expander myself, I certainly could not turn down the chance to dine with two pregnant ladies 😛 Here they are getting ready to tuck into their BBQ feast:

They ordered veggie tempura for an appetizer, so I had to have a few batter soaked nuggets for fun:

I ordered the spinach salad with BBQ’s famous rotisserie chicken, and I was very pleasantly surprised when it arrived complete with mushrooms, raisins, AND walnuts:

The picture doesn’t do it justice — this salad was HUGE. Raspberry vinaigrette came on the side, and I probably used about a tbsp of that for drizzling as I ate through the massive bowl.

When we finished, there was still a bunch of veggie tempura lingering: 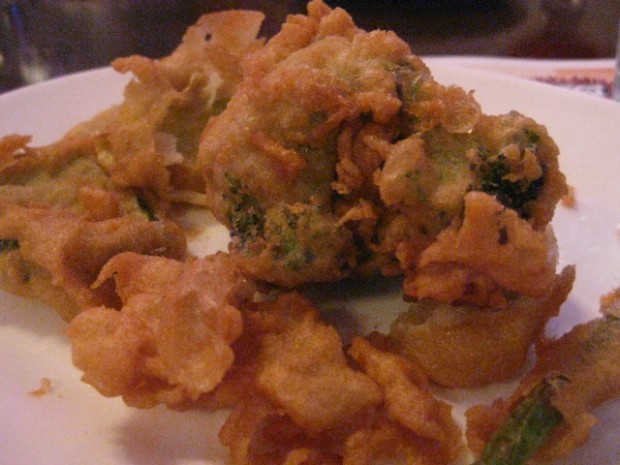 I ate the choicest bits of crunchy batter and then peeled the rest off to devour the veggies like so: 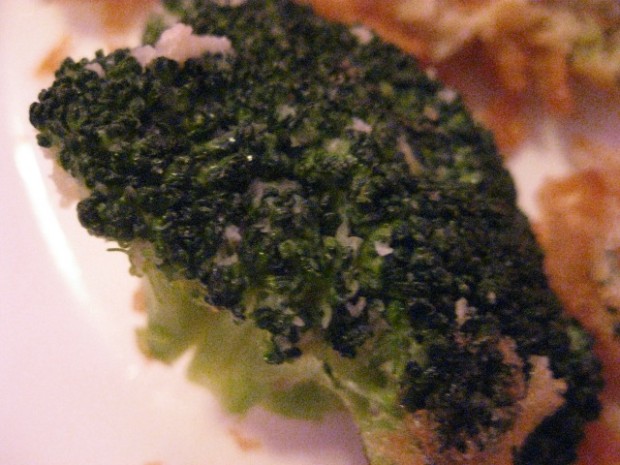 I also rescued the uneaten cornbread from the ladies to bring home for future use.

And because they make pretty pictures, Karimah first ordered a virgin peach daiquiri but then sent it back in favor of a virgin pina colada when she realized the daiquiri still had a strawberry base: 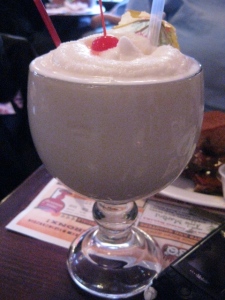 I actually ended up drinking about half of that mammoth colada before we left because I haven’t quite mastered the art of asking the waiter to please wrap my frozen drink for me to take home, thanks.

And quite fortuitously, the waiter brought us extra change and Karimah and Deana gave it all to me … so my meal was nearly free! Thanks, ladies 😀

We all waddled out of the restaurant after — Karimah and Deana with their authentic baby bellies and me with my spinach baby belly (much more pleasant than a cake baby belly, however!) — to head to the subway.

And very quickly before I dive headfirst into my bed and zonk out, I came home with another load of delicious food donations! Giant salad with roast chicken and garlic/lemon dressing from Inginia, Dominican pork and beans from Mildred, salad greens and banana/grapes/strawberries from Nydia, and the two pieces of cornbread from Deana and Karimah:

Expect to see these items resurfacing in my meals over the next few days!

Do you mostly eat IN or OUT during the weekend?

Giveaway alert: Another chance to mix your own granola at EatFabInNyc!

17 thoughts on “Greens, greens, nothing but greens”