… may have been the best part of my day 😀

I attempted to go to work this morning. I was still in pain, but I made it down the subway steps and into the station. And then I did something strenuous (like breathe), and sharp pains started shooting all around. I stopped moving for a minute and tried to decide whether I should continue. I think I walked in four circles because I didn’t know what to do! I finally told myself I was being ridiculous and obviously could not go to work in that state since work involves walking all over East Harlem and up and down apartment building steps and playing with babies on floors. I came out of the subway and called my mom to confirm that I was not being a slacker. She reassured me, and I went back home (even though I still felt guilty and more guilty for feeling so unreasonably guilty) to hunt down a Sports Medicine doctor (apparently my insurance only has ONE) and set up an appointment for this afternoon.

In the meantime, I still had to eat. I got hungry again around 10:30 and had my yogurt (same mix as yesterday).

Almost forgot, a mom brought this fun papaya yogurt for me yesterday! I don’t like fruity yogurts by themselves, but I mixed it into the big batch of plain + fruit and it added a tasty extra layer.

To make myself feel useful, I did more push-ups and crunches and added in some triceps dips off the coffee table (thanks, Jess!). A surprising number of you mentioned on my last post that you use your pets as exercise props. Freaks! No, just kidding, I think that’s cute and very resourceful. Almost makes me wish I had a cat.

The highlight of being home today was that I could use the oven and the proper tools to prepare my lunch … critical components because I was having pizza!! I made it on Sunday but didn’t let myself taste-test any because I knew I would need it later in the week.

I started with this mini whole wheat Boboli pizza crust that I got for free, thanks to the coupon that Tina sent in my Valentine’s package. I was so excited to open the package and see that that crust already had some cheese baked onto it, mmm: 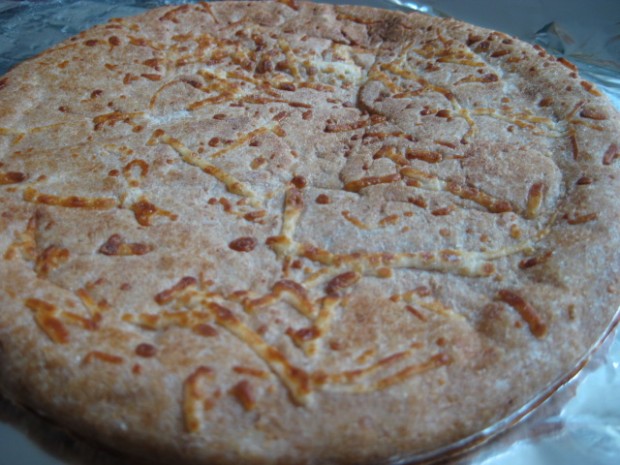 Because I like my crust well-done, I baked it by itself for 10 minutes at 450 while I got to work on toppings. I had two things that I knew I wanted to include: the caramelized onions from last Tuesday night’s event and the last bit of goat cheese that was languishing in my fridge. Working from there, I made a sauce by immersion-blending the goat cheese with 1/3 cup plain Oikos yogurt and a few tomato slices (all I had!). I spread most of the sauce onto the crust.

The first layer of toppings involved the last five olives from a jar in the fridge and the last three radishes (thinly sliced) from my office’s food pantry leftovers a while back. Over that layer, I drizzled a bit more sauce for glue-action and added all of the chopped caramelized onions, a bunch of cooked chicken pieces left from a work event ages ago (they’d been stored in my freezer, obviously), some roasted red pepper pieces, and sprigs of cilantro. I also mixed a splash of balsamic vinegar into the last drops of the goat cheese sauce and drizzled that over the top:

I grated on some fresh parm and put the pie in the 450 oven for another 30 minutes until it got browned: 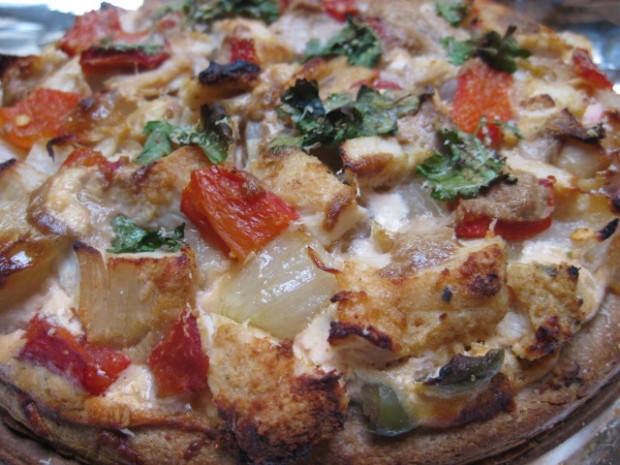 And half of that pizza became today’s lunch, yay! Since I was home, I got to reheat it on the pizza stone and serve it to myself properly: 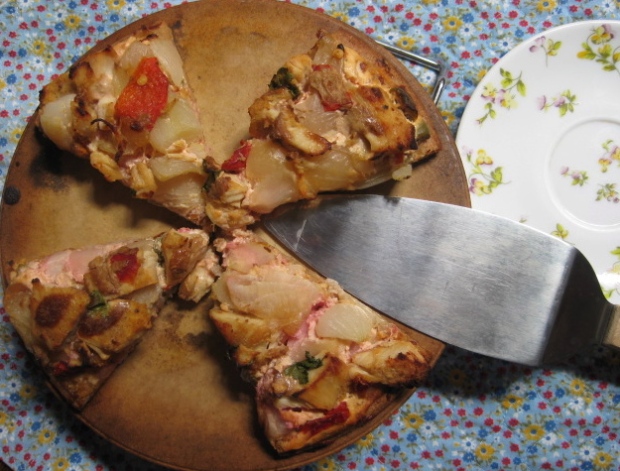 It far exceeded my expectations! The sauce got so thick and goaty after all the baking, and the crunchy crunchy crust was the best part. 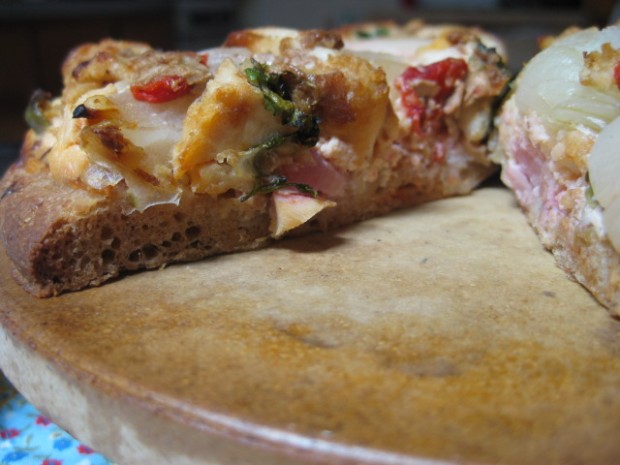 I can’t wait to have the other half on Thursday!

I whipped up a quick little dessert of approx 2 tbsp of that same yogurt mix with a biscotti bite (speaking of which, congrats to Kelsey, the highest bidder on these in Meghann’s bake sale!) and a spear of Hershey’s chocolate (plus sprinkles of Pb2 and nutmeg for glare management). It was like a mini Stonehenge: 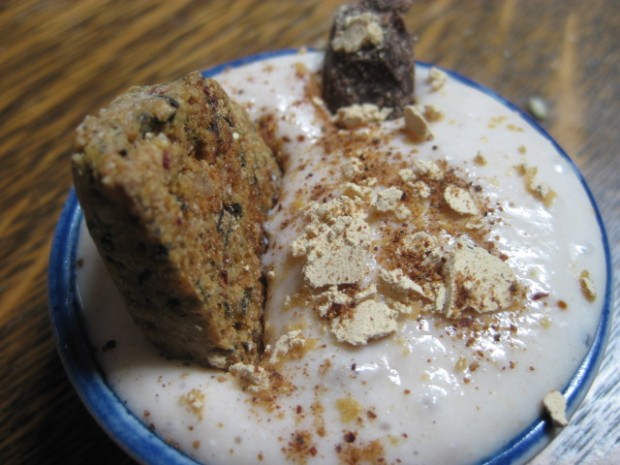 Shortly after dessert, I was off to the doctor! To make a long story short, he thinks my problems involve a right gluteal strain and a left hamstring strain … and .. wait for it … he gave me permission to run through the pain! (within reason, of course, whatever that means) He also noticed that my hip adductors are weak and probably led to the strain, so he recommended that I get going on some lunges (I just wrote lunches, haha) and squats to strengthen the muscles. And I can do all of this now, apparently! This is good news, but now I feel like I’ve been being a big baby for the past week and a half. But everyone has been saying to stay off it and rest! I guess the answer is that there is no answer …

The doc also suggested that I look into neoprene knee compressors. I went to the sports store to investigate, but the guy there told me the compressors would only be a quick fix and the problem is more likely with my sneakers since I’ve been using the same ones since September for running and every other sort of activity. He had me run on a treadmill (which oddly enough did not cause me any pain!) and showed me how my feet are flat and my toes turn out, meaning that I need sneakers with extra support. He seemed sincere and not just trying to get a bigger sale, and what he said made a lot of sense. I just checked my sneakers here, and they do have that grey marking on the insole that indicates the support … but I can see how they’d be not so effective after all these months. So new sneakers are on the agenda. Maybe I can squeeze in a trip to Kohl’s when I’m home in MA this weekend?

With all of that in mind, tomorrow morning I’m going to get up, jog through the pain to the gym, and do squats and lunges! I can’t wait (sarcasm). I am, however, excited for the return of sweat.

The naproxen I downed while in agony this morning was clearly at its peak of performance, so I took advantage of my mobility by doing some errands around Union Square since I was there anyway. I sampled my way across several avenues as an afternoon snack. (If you’re still awake and reading, thank you! I don’t blame you if you’ve fallen asleep.)

Poor excuse for charoset from Garden of Eden: 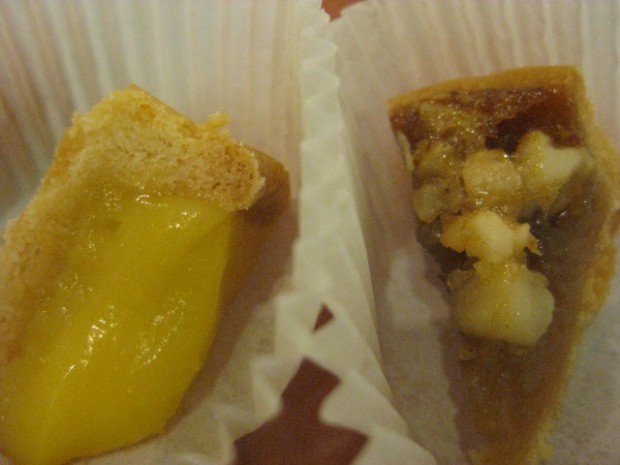 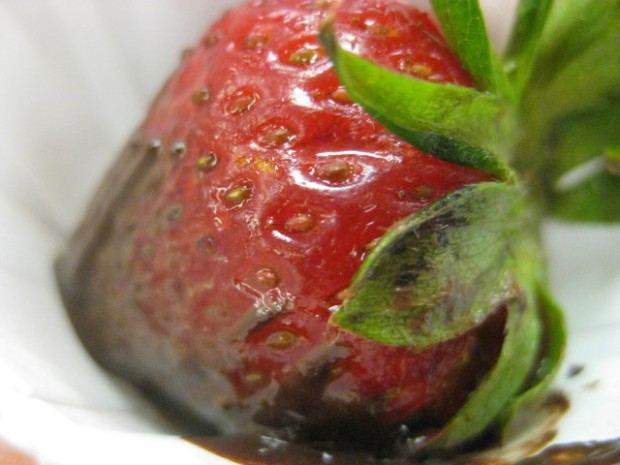 I also actually bought some groceries this time. Can you believe it? For about $22, the goods included a pineapple, strawberries, medjool dates, spinach, arugula, sunflower seeds, peanuts, and Yogi Mexican Sweet Chili tea: 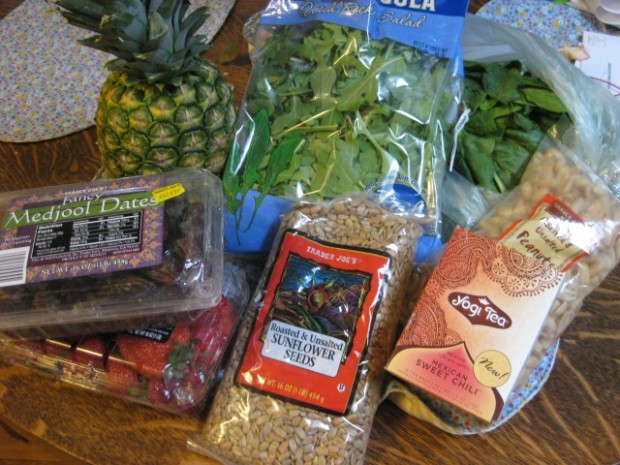 I’m sipping on the tea now with some unsweetened soymilk and … it’s interesting. It’s got an oddly sweet aftertaste and I somehow managed to not notice in the store that the #1 ingredient is licorice … a not so favorite flavor of mine. But, with a little luck, I should be able to acquire the taste since the tea cost $4 even with the coupon I had!

OK, I could go on, but I think I need to cut the cord here because this post is like a novel as it is! Have you ever run through the pain and lived to tell the tale?