I’ve been feeling the need to get my blog on lately, perhaps because I’m having a real life tale of expansion in a more drastic way than I’ve ever experienced before: 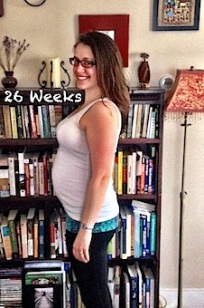 It may not look that drastic but, believe me, I am feeling the weight of those extra 10+ pounds … along with all sorts of cute karate directed at my bladder.

I have many many projects to share, and I am going to start with one from the end of last summer. (Eeek, ancient!)

In our dining room, we had a small side table desperately wanting to be flanked by some chairs. I never took a direct “before” picture, but you can catch glimpses of the table and the chairless spots behind Erik demonstrating his local brand loyalty: 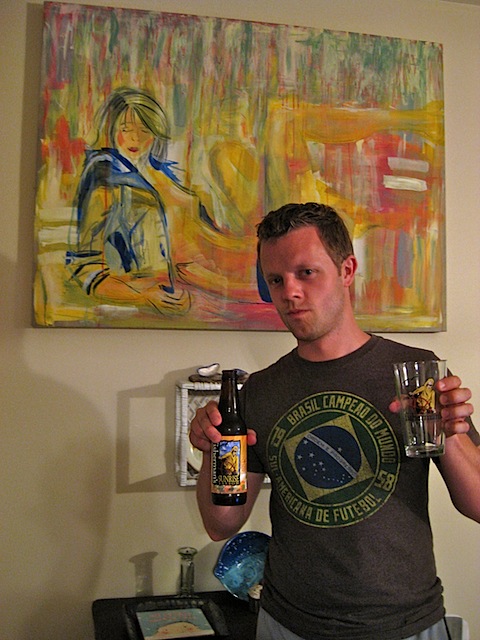 Worth noting: The giant semi-naked lady canvas is a story in and of itself. When Wife & Ted were visiting last Memorial Day weekend, we stumbled upon the masterpiece at a yard sale for $3!!!! Do you know how much just a plain canvas of that size would cost to buy?! The guy selling it desperately wanted to unload it because some other dude had painted it for his girlfriend years before. Ohhhh also, the canvas was captioned across the top in bold blue writing: “Anthem to a Seventeen-Year-Old Girl.”

The last thing I needed hanging in my dining room was a painting of a half-naked teenage girl, and I felt guilty purchasing it with the intention of painting over it. The seller, however, begged me to take the canvas and do what I pleased as long as he never had to look at it again.

The canvas sat ignored for a while on my dining room floor because I couldn’t quite figure out how to doctor it. I really liked the colors and saw that some skill had gone into the creation of it, and I couldn’t bring myself to obliterate someone else’s art. When my artist mama visited a few weeks later, she helped me create a plan, and together we mixed up a bunch of wall paints (I’d been hoarding samples) to create the perfect tints. We set to work covering up the controversial caption with great results! I later added a bit more shirt because the poor girl seemed cold, and I covered up what appeared to be a pool of blood under her bottom. You’ll see the final version below.

Anywayyyyyyy, chairs! Erik and I had found some cute little wooden chairs with brocade-y upholstery at an antique shop, but they did not really fit the space. Dark wood overload! I decided I needed some brightly colored tall chairs with metal backs instead. I mentioned this epiphany on the phone to my mom, and she reminded me that she had just the thing rusting away in her garage. On her next visit to Gloucester, she brought these gems along:

I unscrewed the seats, and Erik gave the chairs a good sanding and de-glossing for me.

I gave both chairs several coats of Valspar’s Exotic Sea gloss spray paint-and-primer-in-one. Getting all sides of those curvy parts covered was no quick process!

Once the frames were painted, I tried them out in place to get a sense of which direction to take with the seats. Forgive the overly filtered iphone photo!

I took a trip to Joann Fabrics for inspiration with the previous seat cover as a sizing guide, and I came out with an actual purchase: 3/4 yard of this Southwestern-y rainbow chevron fabric, some thin foam for a little bit of cushion, and an upholstery staple gun.

I had no idea what I was doing but set to work anyway. Ignore the mess (and the graininess!). The guest room has (still!) gotten minimal attention since we moved in. 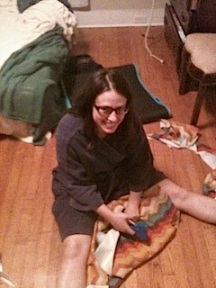 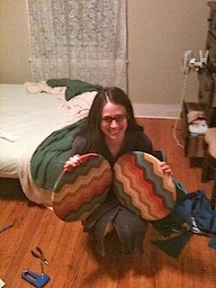 I was worried the seats were too rainbow-y at first, but they’ve really grown on me!

(Erik’s farm tomatoes give an indication of the age of these pictures! Also, food had to make its way in here somehow.) 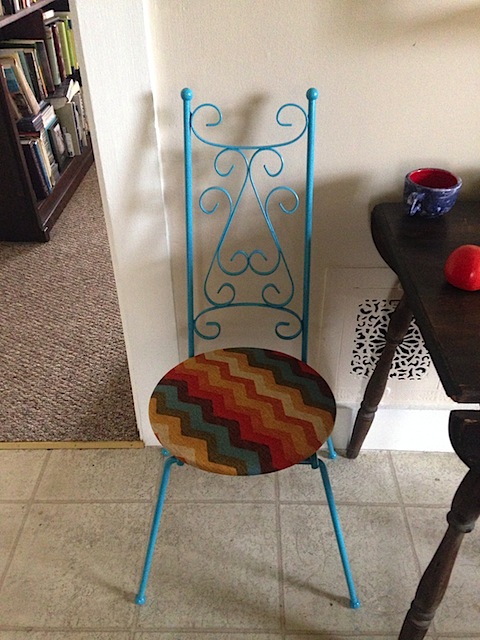 Tomatoes before and after:

The doctored art and the revitalized chairs (and the canned tomatoes!) make me so proud of this formerly dead wall that is now full of life.

Still on the agenda: convince the landlords to replace the wretched linoleum floor!