My lunches for the work week happened when I found an intriguing soup mix packet while cupboard-organizing the other day … probably left over from the roommates I had before the current ones, over 3 years ago! Because my apartment just kept getting sublet, there was never any sort of complete clean-out. Here’s the packet with some other soup ingredients: 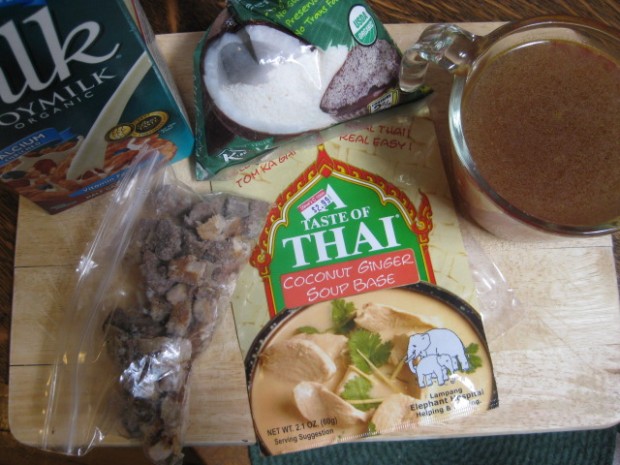 soymilk, coconut, homemade (!) veggie broth, frozen work mystery meat from a while back, coconut-ginger soup base

I made this soup yesterday and sort of used the recipe on the soup mix packet, but mostly I did not. The veggies all got sauteed in canola until they were browned, at which point I added the meat and sauteed more until it was fully thawed and heated through.

I did not have coconut milk, as requested by the soup base packet, so I kind of made some by simmering 1 cup of soymilk, 1 cup of water, 3 tbsp unsweetened shredded coconut, and 2 tsp of this guy I’ve had in the fridge:

It probably would have been delicious as it was, but I had to go and add the actual soup base packet to the pot: 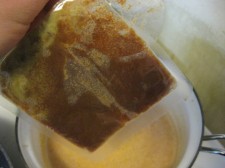 I knew pretty quickly that this soup was not going to be amazing because I could smell that fake lemony concentrate smell coming from the pot as soon as I dumped it in. But I forged ahead. Eventually, everything went into a big pot with the veggie broth (and loads more water because I was trying to dilute the packet), powdered ginger, and black pepper:

It got pretty thin, so I added 1/2 cup whole wheat cous cous for quick thickening, and that seemed to do the trick: 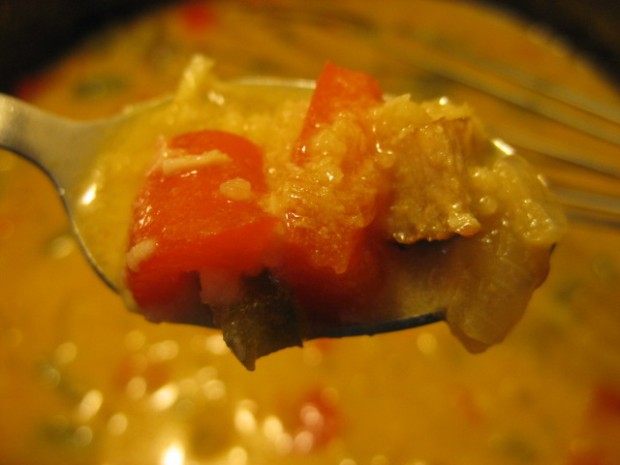 In the end, the soup turned out okay and I’ll definitely eat it, but I won’t ever use one of these packets again!!!!

My experimenting resulted in about six cups of soup, so two went into the freezer and the rest I’ll eat one cup at a time for lunches this week.

Along with the soup, I’ve packed a standard yogurt blend of 1/2 cup yogurt, 1 chopped date, cinnamon, chopped apple pieces, chopped strawberry pieces, and a sprinkling of kashi golean crunch over the top:

I’ll be back later to report on snacks and any adjustments to the food plan. What’s your experience been with soup mixes/spice packets? Do you prefer seasoning yourself or using something pre-made?

Also, The Healthy Hostess is giving away Banana Nut Cheerios along with some fun kitchen goodies (including a banana tree!), so make sure to go check it out!

9 thoughts on “Use what you got”